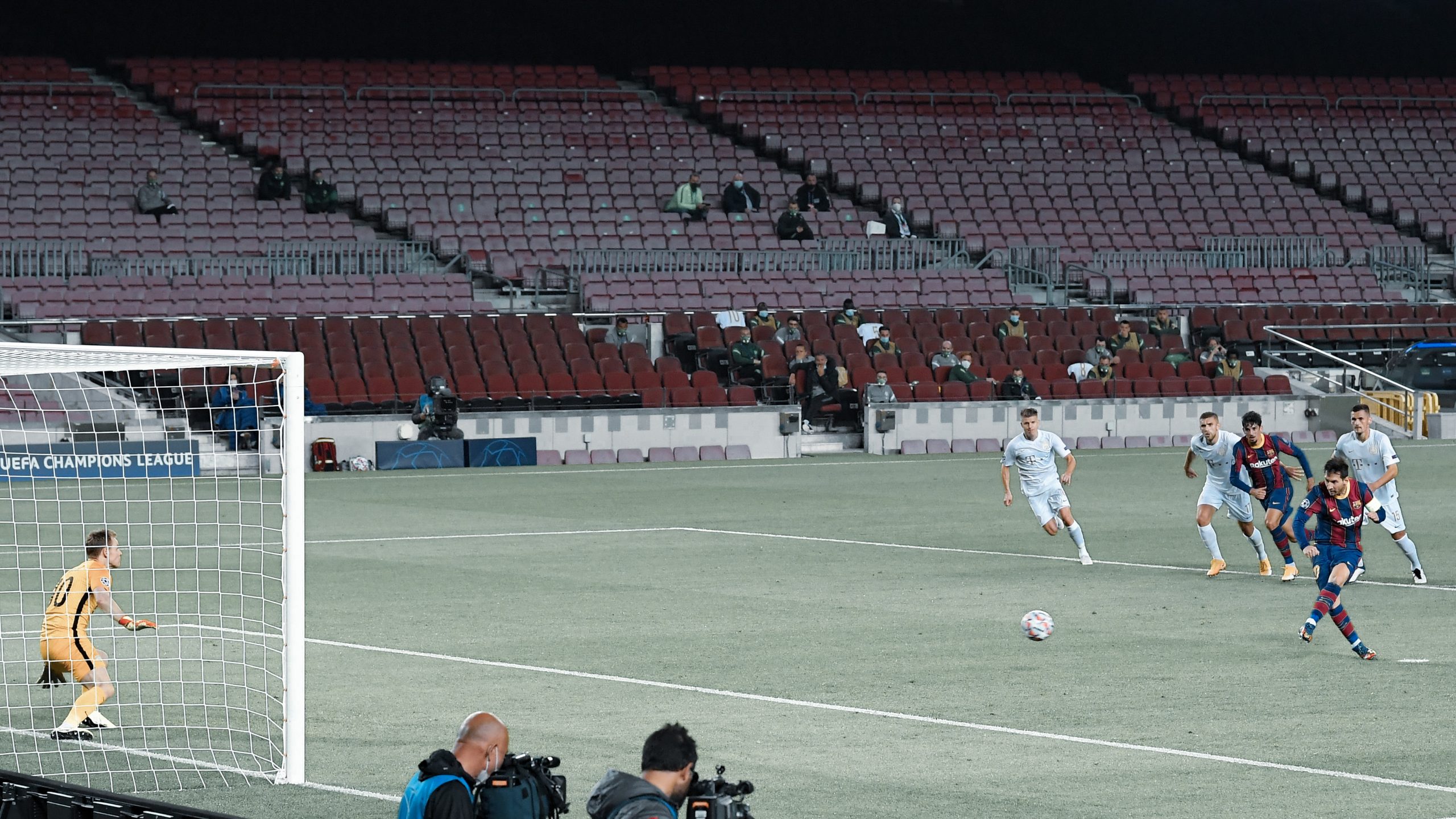 A detailed look into the game by numbers and statistics and tactics as FC Barcelona kicked off their UCL 2020-21 campaign in style.

FC Barcelona played the first group stage game of UCL 2020-21 at home against recent Hungarian champions Ferencvarosi Torna Club, also called Ferencvaros. The Budapest outfit were playing against Barcelona in a competitive match for the very first time (previous meetings had all been friendlies), and naturally, Barcelona started cautiously. However, shaking off the rust from the International break and the disappointment of the loss against Getafe in the weekend, Barcelona came up with a dominant display and ran out as winners scoring five and conceding just one.

Barcelona yet again fielded a 4-2-3-1, with an unchanged defence from the game against Getafe. The double-pivot changed slightly, with Miralem Pjanic starting as Frenkie de Jong’s partner. Ansu Fati and Francisco Trincāo started as wingers flanking Philipe Coutinho at attacking midfield, with Lionel Messi starting as the false 9.

The touch-based heatmaps and the pass-map show some interesting tactical changes from the last two league games. First of all, and most importantly, this was the first time this season that both flanks were very well utilised. Having Trincao and Fati, both adept at playing on the wing, greatly helped the team build and attack through both sides.

While Antoine Griezmann added a lot of defensive cover while playing on the right flank in the previous games, Trincao did his share to help out the team, too. He did well in attack while also putting in a brilliant defensive shift – Griezmann’s absence was not felt at all.

Secondly, the positioning of Frenkie de Jong was a lot advanced, bringing the best out of him. Unlike the last two games, where he was placed much deeper and wider on average, last night he had more freedom to venture up and also drift a bit centrally. On average, he took up a higher position than Pjanic and took part in a lot of the attacking moves, while the Bosnian was tasked with the deeper progressions.

Ferencvaros started out in a 4-2-3-1 as well, but soon evolved into a 4-1-4-1/4-5-1 structure and settled into it for the game. Their midfield was very compact, and mostly stayed deep. Their idea was to use counters, with Tokmak Chol Nguen the only player taking up advanced positions to lead their attacks.

Barcelona dominated possession as usual, but the biggest positive takeaway are the pressing numbers. The Blaugranas posted impressive PPDA (Passes per Defensive Action) numbers as compared to their opposition. It also indicates that a lot of the game was played in the opposition’s half, showing dominance in the game. The shot maps and the xG flowcharts show how imperative Barcelona were throughout the game, and that a lot of the shots were excellent chances to score.

Next we take a look a gallery of all the goals scored by Barcelona, and the lone goal scored by Ferencvaros to discuss the difference in ideologies of the two teams.

While Barcelona’s first goal took a came solely as a result of moments of individual brilliance by Messi, all of the other goals came through wonderful intricate buildup. Both sets of wide players were very well-utilized, who were able to play out through pressure no matter where the buildup started.

The buildup to the second goal culminated in a wonderful lofted pass by Frenkie de Jong to Ansu Fati, who slotted it past Ferencvaros’ hapless goalkeeper with a first-time finish. Fati was involved in the third goal as well. An intricate set up of passes in the final third led to Messi finding Fati with a pass, who back-flicked into the path of Coutinho, who made no mistake slotting it into the bottom corner.

In contrasting fashion, Ferencvaros were very direct. It was very clear that Tokmac Nguen was their main danger-man. Nguen created a couple of really dangerous moments in the first half with his threatening runs across the backline. The first effort was called offside, while the second led to him setting up Isael for a thunderous shot against the post.

He was also at the helm of their sole goal of the game, running at Pique, who was unable to keep up with Nguen and hauled him down into the box, leading to a penalty.

Barcelona’s passing was on point against Ferencvaros, helping the team to cover all zones perfectly, stretching the pitch and making it difficult to defend. Most importantly, there were a lot more passes into the box as well exchanges inside the box than the previous two games. Particularly impressive were the utilization of zone 14 and the half-spaces. Here are the dangerous passes portrayed:

The key passes came from multiple zones as well and from multiple sources. Messi had 4, Roberto, Pjanic, Coutinho, and Fati had 2 each, while de Jong, Trincao and Dembele had 1 each:

Barcelona completed a much greater number of final third passes almost throughout the game except for a small window when Pique received a red card and sent off for fouling Nguen, and Barcelona had to play with 10 men.

Barcelona’s defence closely resembled a 4-4-2 block with Philippe Coutinho and Lionel Messi high up, and sometimes in 4-5-1 as Messi was the sole player allowed to stay up.

After Pique’s red card, Barcelona took up a fairly compact 4-4-1 shape. Ferencvaros were pushed back into their own half for the bulk of the match as Barcelona won the ball back fairly fast. The only time Ferencvaros managed to peg back Barcelona was after Pique’s dismissal. Here is a glimpse of the defensive activities of the two teams, showing Barça’s high turnover rate:

In fact, the third goal that Barcelona scored early in the second half came from a great bit of pressing. Messi aggressively pressed the central channels into Ferencvaros’ third and the box, so the ball had to be passed out wide, where Trincao led the charge. This led to a misplaced pass that was intercepted by Pjanic, and Trincao recovered the loose ball. A lovely sequence ensued, and Barcelona were up 3-0 in a blink.

Having discussed the defensive structure and the pressing intensity, now it’s time to discuss some of the issues. In this particular game, the issues were entirely in defence. Ferencvaros – Nguen in particular – exposed the problem Barcelona’s centre backs have against quick attackers. The Norwegian’s runs dragged the defenders all over the place, mixed with the high line that Barcelona employs, it resulted in nightmares as it often does.

Whenever the fullbacks were pushed high, and possession was turned over, Ferencvaros directly took on the two defenders left on the pitch. They could not bypass the press by making long passing sequences, so they quickly circulated ball out wide or to the deep half spaces before launching long balls to Nguen, and sending out supporting runners. One such run led to Pique’s red card.

This current batch of Barcelona players seems a tad too card-happy. Lenglet has already seen a red card in the Liga. Roberto, Dest, Pique – all of them have seen yellow cards just 4 games into the season. This is not healthy, especially given the lack of quality depth in defence.

Coutinho has been playing well, to say the least, and there are little to no doubts over his performance. However, his positioning – which surely is a tactical quirk of Ronald Koeman – is very interesting. Instead of the usual central positions a nominal 10 would take up, he is primarily operating in the left half space. There is quite a bit of overlap with Ansu Fati. Its clear that Barcelona are trying to achieve wide overloads on the left side whenever they can.

Coutinho performances are not an issue. His role, on the other hand, might be. (Photo by Alex Caparros/Getty Images)

This system, however, needs a striker and more directness to function. As it stands, the team is deploying two 10s in Messi and Coutinho. While this has worked well against weaker oppositions, it remains to be seen how well the lack of vertical staggering can hold up against stronger opposition.

The story of this game will be incomplete without mentioning the substitutions. Junior Firpo returned from injury and came on along with Pedri and Ousmane Dembele around the 60-minute mark. Ronald Araujo had to come on after Pique’s dismissal, while Sergio Busquets replaced Pjanic later to help see the game off.

While Pedri got his first goal for Barcelona, Dembele’s brilliant dribble and tenacity in the box from where he cut back the ball has to be mentioned. Seven minutes later, the World Cup winner found himself at the receiving end of a pass from Messi and smashed home for the fifth and final goal.

After the drab showing against Getafe, this was a much-needed boost for the team before the El Clasico. Multiple scorers, good buildup plays, high press – pretty much everything except the red card was to the point. Next week’s UCL away game against Juventus will prove a stern test as well, and hopefully, we will see the best of Ronald Araujo in that game.