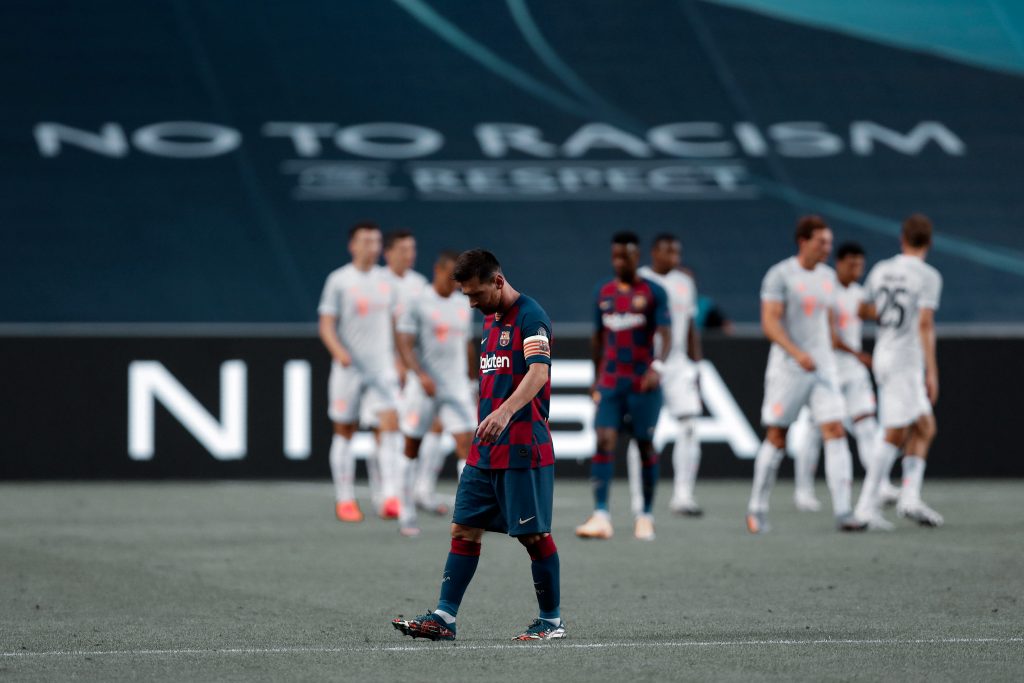 After the humiliation of losing 2–8 in the Champions League, the club has hit rock bottom. For the third year in a row Barça embarrassed themselves. As painful as it may seem, it is important to understand what went wrong on Friday night as Barcelona totally collapsed against Bayern Munich.

Following the worst defeat in the club’s history, there must be significant changes, and quickly. The Barcelona vs Bayern Munich showed one team that were completely lost and another that is doing things right. There was a clear lack of leadership from the Catalans and a management that was completely out of its depth. Many players proved that they are not at the level to be playing for the Spanish giants.

The game also highlighted that there are much deeper problems at the club than just poor performances on the pitch. Financial troubles, an incompetent board, reckless spending, midtable managers and awful squad planning are just some of the issues behind the scenes.

When the line-up was announced, many fans’ fears had come true. Quique Setién had abandoned his principles and chosen a team that proved he is not brave enough to manage the blaugranas. He tried to set up defensively with four in midfield. This meant Arturo Vidal often playing behind the front two and Sergi Roberto in right midfield.

It evidently did not work and resulted in the midfield completely collapsing in both defending and attacking. They could not keep the ball and gave in to Bayern’s pressing while also being unable to win the ball back. Nélson Semedo and Roberto were hopeless on the right-hand side and simply did not have any understanding between them. This led to most of the Bavarians success coming from Barça’s right flank.

In defence, it was simply embarrassing. To concede eight goals is unacceptable. The full-backs have been a problem at the Catalan side for years now and change is needed in this position. Clément Lenglet and Gerard Piqué just gave up as both are experienced enough to do better. Marc-André ter Stegen also had a miserable night. His passing let him down and he should have done better with a few of the goals.

One of the most concerning issues is the team’s mentality. They looked beaten after the third goal went in. There was no leadership, no confidence and every player just hid. This has come from too many players hiding behind Lionel Messi carrying them for seasons now. The team desperately needs to be freshened up as most of the heavyweights have become comfortable and lost their competitiveness.

When Quique Setién was appointed he sold fans a dream of returning great football back to the Camp Nou. He was going to reinstate Johan Cruyff’s style and give priority to the youth players. However, Quique did not live up to this. The clash against Bayern showed that Setién does not have the personality, strength or ability to manage Barça. He went for a defensive formation and conceded eight goals. This is not Cruyff football.

Again, he only made two out of the five available substitutions. He brought Antoine Griezmann on at half time when the Messi, Luis Suárez and Griezmann trio had only worked once this season, against Villarreal. Moreover, he substituted Ansu Fati on and it looked like he was told to play through the middle. Barcelona needed width in the team and pace upfront which Setién still has not learned. He did nothing to try and fix the result.

“I like my team to play well, that’s the only way I can go home happy. If we win 1–0 undeservedly, I will be happy with the three points but I will go home annoyed because what you need is to feel good and do things properly. If you do it well, you will always have more chance of winning”

From start to finish, his six months in charge have raised more questions than answered. Quique failed to compete in any competition and made the exact same mistakes as Ernesto Valverde. His substitutions were bizarre as he seemed to forget he could make any until the 80th minute in most matches. Furthermore, he did not have the courage to drop those who were under performing and replace them with younger players. It has been a sad end to his short term in charge after promising so much at the beginning.

For years Barça’s demise has been clear because of one man: Josep Maria Bartomeu. During his time, president Bartomeu has taken the joy from the club and permanently scared it. The Bayern match showed just how broken the club has become during his time. At the start, there were happy sensations projected by the board to make it seem that all was well, this was an illusion. Under Bartomeu’s leadership, Barça has lost its identity and spirit.

The current president is part of a growing trend of football club owners that do not care about football and are only in it for business reasons. What makes Bartomeu stand out is that he does not understand business either. He has financially ruined the club with shady deals. No club has spent more money over the last decade or has a higher wage bill than Barcelona.

What has the club got to show for it? The oldest starting eleven the azulgranas have ever fielded in the Champions League. Three of the most expensive signings in their history costing nearly €500 million combined that have failed. Four years of Champions League embarrassment. A lack of competition throughout the squad from disastrous planning. La Masía being overwhelmed with strange signings to balance the books. There are almost no positives from his time in charge.

Friday’s game showed a disgraceful performance by the players and the manager of Barcelona. There can be no excuses, and both must own up to their failings. Although, when looking at how it has come to this point, the board must take the blame too. Bartomeu’s time at Barça was always leading to a disaster. Nobody could have predicted it being so bad.

It is sad to see a club that prided itself on playing attractive football, its youth academy and love for the game abandon everything it believed in. The further the club drifted from its principles, the worse it became. Change is desperately needed, and this must come from people that understand what Barça stands for.