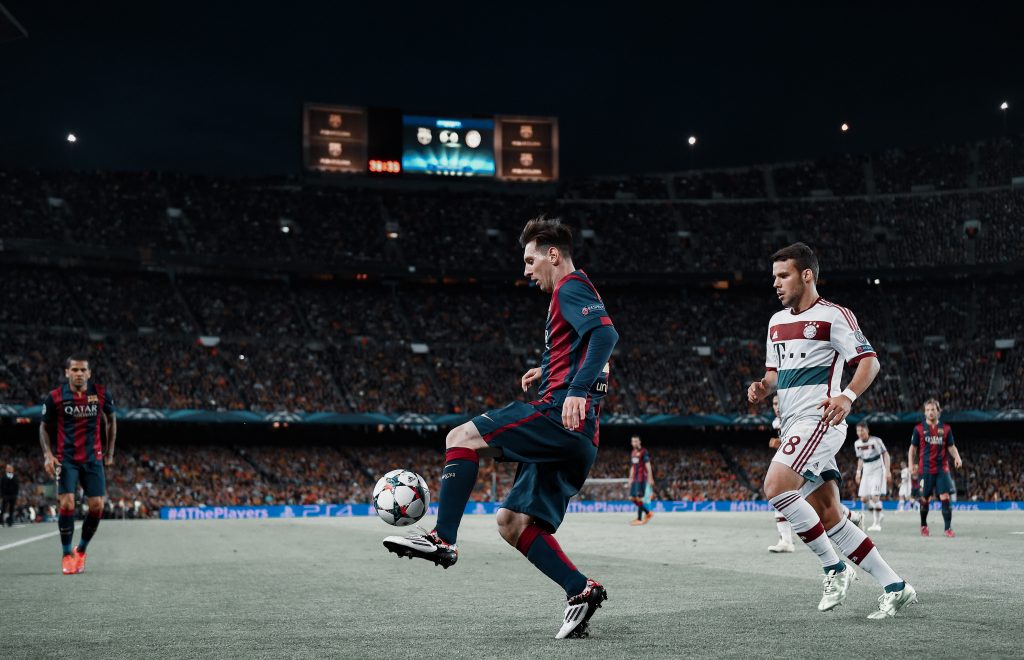 As Barça land in Lisbon for the last stretch of the Champions League, they intend to stay till the end and bring home the trophy. But they face the first hurdle of three, in the form of German champions. Here’s the preview of the match between Barcelona and Bayern Munich.

The Champions League has never been this open, and with just three victories, any of the six remaining teams –– four quarter-finalists and two semi-finalists –– could be champions. With all clubs camped up in Portugal and a game every other day, the following week would probably be the most enjoyable one in 2020 for the footballing fraternity. With a bracket of the semi-finalists already decided, it’s time for battle towards the remaining two spots.

As Antoine Griezmann mentioned on landing in Lisbon, the team has packed for till August 23rd, and they expect to go all the way. Several Barça players have given the opinion on this year’s unpredictability, and they fancy themselves lifting the cup for the sixth time. While the mood in the squad has been considerably high after winning the Napoli tie, the Catalans enter this game as the underdogs.

“I have my suitcased packed as if we are staying until the 23rd August. I brought my PlayStation and everything”

Bayern Munich have been daunting throughout the year and come into the game with a winning streak of 18 matches. Despite the shaky start to the campaign in Bundesliga, they racked up points after Hans-Dieter Flick’s appointment and won the league, handsomely yet again. Right after the end of the Bundesliga season, they moved aside Bayer Leverkusen with ease in the DFB Pokal final. With two trophies in the bag, three teams stand between them and their second treble.

Barcelona, on the other hand, have had a subdued season. Having already been knocked out of the Copa del Rey, they lost to Real Madrid in the La Liga race too, after dropping crucial points post lockdown. The problems transpired during the season have become uncountable now. The only way to end the season on a high and prevent going trophyless is to win the coveted Champions League by any means. But, first, the Bavarians.

Barça’s major struggle throughout this season have come against teams imposing low blocks. With the squad deficient in many positions, they have struggled immensely to unlock deep defences without proper wingers or runners off the ball. Fortunately, Bayern are far from the teams deploying tight defences. But, unfortunately, they are a high pressing side, and Barça have squandered games to those in recent Champions League history.

The lack of width upfront has been taken care of by advancing full-backs for the whole campaign. But, while positioning Jordi Alba and Nélson Semedo / Sergi Roberto high up the pitch might pin back their wing play, the Bavarians are too quick on the transition for the Barça centre-backs. Quique Setién must figure out a way to play out of the press and find Lionel Messi and the attackers in constant one-on-ones against the Bayern centre-backs.

While the pace and might of the Germans might be threatening, Barça are no slouches on their day. An early goal might jumpstart things for the blaugranas as they have in many games this season. If they find a way to control the tempo of the game, and the attackers have their shooting boots on, Barça do have a sizeable chance.

“Bayern are playing very well, they have a great striker, but we also have the tools to play a great game. We have to look at our strengths and try to qualify”

Sergio Busquets and Arturo Vidal are back from suspension and will slot straight back into the midfield alongside in-form Frenkie de Jong. Quique Setién has confirmed the availability of Ousmane Dembélé, with the Frenchman capable of featuring for a few minutes if need be. Messi, Griezmann and Semedo are clear of the risk of suspension, with the yellow cards from the previous rounds wiped off.

What to expect from Bayern Munich?

Bayern’s season did not start well according to their plans. They struggled to dominate games, much similar to Barcelona. Senior players like Thomas Müller did not seem to fit into Niko Kovač’s system, and the team was in shambles. A defeat to Frankfurt finally put the nail in his coffin, and Hansi Flick got the reins. And, thus began the reign of the German tactician. In a few games, he got the squad up and running. And in no time, they were back up in the top of the Bundesliga.

In the last 27 competitive games, they have won 26 and have drawn the one. Such dominance, in such a short period, must be lauded as Flick got the well-deserved permanent job. Die Roten ran through the inexperienced Chelsea in the round of 16 ties, smashing seven past the Londoners. But they probably face their most tenacious opponent all season in Barcelona, despite being the overwhelming favourites coming into the game.

“Bayern are always favourites, but Barça is the best in the world, so it will be very even. Bayern are confident but they should know that they won’t be playing against a Bundesliga team”

With excellent off-pitch work, they have assembled an excellent squad with the perfect blend of experience and youth. With Robert Lewandowski firing on all cylinders, they have been dominating every game. Very capable of breaking defences, Bayern rely heavily on their quality fullbacks to overload the flanks. The wingers and Müller either move in between the lines or make runs in behind. And the midfielders and centre-backs are more than capable of finding them.

While the two central defenders may not be the most physically dominating players, the team presses as a unit to recycle possession. Although in some cases, they get caught during counter-attacks from the opposition. The electric pace of Alphonso Davies comes to rescue as he tracks back with a purpose to tackle or intercept. While Benjamin Pavard is injured and ruled out, Joshua Kimmich fills in at right-back and ex-Barça player Thiago Alcântara fills the midfield spot. Sensations coming into the game have been great, and the Bavarians would be hungry to extend their winning run.

“We know it will be difficult, but we know what we have to do to qualify for the semi-finals. It will be a very good match”

• Bayern have won their last 8 matches in the Champions League

• Bayern Munich have won their last 18 games in all competitions

• Barcelona are undefeated in their last 8 Champions League matches

There has not been a game in recent history where Barcelona were underdogs coming into the clash. The last two debacles in the Champions League have pushed the fans and pundits to undermine the Catalans. But, they have the right opportunity to not only silence their critics but to erase all the nightmarish memories from the past two seasons. The writer’s prediction for the game: 2–2 and into the penalties. It’s anyone’s game from there.