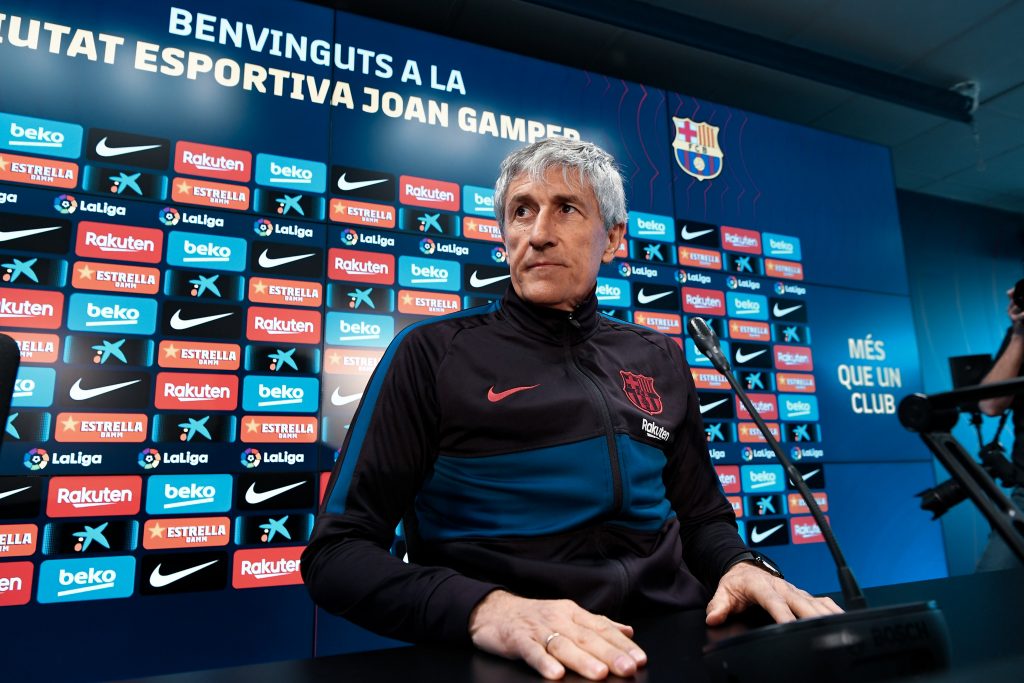 As Barça are slowly losing ground in the La Liga title race, they face their biggest test yet after the break. They host Atleti at the Camp Nou, in a crucial fixture which would determine their fate in this title race. Here’s the preview of the match between Barcelona and Atlético de Madrid.

Before the last matchday, Barcelona were level on points with Real Madrid but were second due to the head-to-head battle. But the blaugranas, going by the Balaídos curse, dropped points versus Celta de Vigo. As Lionel Messi’s magic put the Catalans in the lead at first, Celta’s Messiah Iago Aspas had the last laugh as he curled one around the Barça wall to equalise. The draw puts Barcelona in a vulnerable position in the title race as Real Madrid won their game against Espanyol, and have a two-point advantage at the top. The tables have turned since the restart.

Now, Barcelona are back to their comfort zone, the Camp Nou, but face one of the mightiest defensive units in the league. Atlético de Madrid have not lost a game since Derby day loss at the Santiago Bernabéu back in February. They have one of the meanest defences, currently second-best in the league, and will test the Barça attack with their low block. With the hosts recently prone to struggle against tightly wound defensive blocks, coach Diego Pablo Simeone will not hesitate to pull out the oldest page from his book.

The rojiblancos are currently third, 11 points behind the azulgranas in the table. The last time they met, Atlético de Madrid knocked them out of the Supercopa de Espana in the semi-finals, which in turn resulted in Ernesto Valverde shown the door. The reverse fixture in La Liga saw Barcelona get a surprise away win at Wanda Metropolitano, during Atlético’s rocky start to the campaign. Now, they are in much better form, even better than the Catalans, and stand a chance to cement their spot in the top four.

Barcelona come into this clash with the worst possible circumstances surrounding the club. Arthur Melo confirmed leaving in a bizarre deal, Barcelona dropping crucial points in the title race, an alleged rift between the top stars and the coach, the club cannot catch a break. All these issues are naturally affecting the performance on the pitch even if the players disagree so. While the club looked to have covered their defensive issues, the match against against Celta disproved it as they crumbled under pressure.

While Barcelona showed excellent signs at the beginning of the match, they never locked the game down and helped Celta grow into it. The individual mistakes costed the game, despite the collective effort working in the contest. By phasing out this concentration lapses and putting in that extra effort, Barça can win this game and get their much-needed confidence back. But, first, manager Quique Setién must choose the right personnel and tactics to face Atleti. Second, the players must believe in the coach’s methods and execute on the field.

Will Antoine Griezmann start against his old club, or will he sit on the bench like against Sevilla and Celta? | Photo by Gabriel Bouys / AFP via Getty Images

The Catalans have some boosts in terms of personnel returning to the squad. Sergio Busquets is back after serving his suspension, and Sergi Roberto gets his medical green light after missing a few games. The return of Busquets would bring back the tenacity required in the midfield. Sergi, although might come off the bench, will be crucial in occupying zones on the right side of the field. If Barcelona successfully stretch the Atlético defence out wide with their wingers and employ potent attacking structures to create chances, they might come out with a win here.

What to expect from Atlético de Madrid?

Atlético de Madrid are a different side now than the one that started the season. With new signings, veterans leaving, players adapting to Simeone football, nothing was going right for the rojiblancos. They struggled on the pitch, not able to reciprocate the Argentine’s tactics, and the results suffered automatically. They fell out of the top four with many surprising entries into the Champions League spots. But, like every time, the Madrid side picked themselves up and showed significant signs of improvement. They beat Liverpool home and away in the Champions and showed the world that they are still a capable team.

Atleti are unbeaten since the restart, with only one draw coming off the opening game. With the confidence gain just before the break, they have fought their way back to third place and look like finishing there. The players have seen vital improvements and a more nuanced understanding of Simeone’s methods. Like always, they defend deep in a 4–4–2, looking to strike on the counter. They have scored ten goals and conceded only two since the restart.

The visitors’ captain, Koke Resurrección, and centre-back Stefan Savić are out of the clash due to suspension, but they do have able replacements in their bench. Felipe will fill in for Savić, and either Yannick Ferreira Carrasco, Héctor Herrera, Thomas Lemar or Marcos Llorente will come in for the captain.

With the current squad, Simeone has many players who can play in multiple positions equally well. So, it is hard to predict which personnel he will choose. But the fact that they all work 100 per cent for the team does not change. Šime Vrsaljko and Mario Hermoso are injured and out of the squad. Diego Costa and Marcos Llorente are the two players Barcelona should look out for, as they score in unpredictable circumstances.

• Atlético de Madrid are unbeaten in all competitions since February

Barça do not have the right form nor state of mind to compete in a match of this nature. However, it is during games like these a club of Barcelona’s stature must step up and prove the doubters wrong. Winning this contest would not only keep the blaugranas in the title race but also raise morale and increase the momentum. The players know that anything less a win here at the Camp Nou would be saying goodbye to the title challenge and they should step up.

With the right tactics and personnel, and a little extra effort, it is unquestionably achievable. The writer’s prediction for the game: 2–1 win for the Catalans.