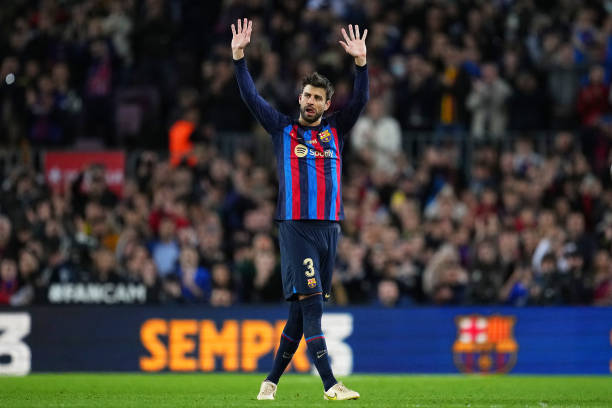 Saturday night at Spotify Camp Nou saw a special atmosphere. It was a routine La Liga game for the Catalans, but the buzz in the stadium was very different as they prepared to bid adieu to one of the club’s finest defenders – Gerard Pique.

The visitors on the night, Almeria, were coming off a rough start to their league season and arrived in Catalonia with the hope of spoiling the Spaniard’s farewell party.

Xavi Hernandez gave Pique the start on his final outing alongside Marcos Alonso in central defence. Jordi Alba played at left-back while Alejandro Balde continued playing out of position at right-back.

Pedri, Sergio Busquets and Frenkie de Jong started in the middle of the park while Ferran Torres, Robert Lewandowski and Ousmane Dembele rounded off the XI.

The first half was one-way traffic with Barcelona dominating the proceedings, possession and chances created. They had 76% of the ball with 16 shots in the opening half as compared to the visitors’ two. They missed three big chances, hit the woodwork once and forced five saves from Fernando Martinez.

The biggest chance of the half was possibly the first one which came via a penalty in the fifth minute. VAR adjudged Kaiky to have stopped Ferran’s shot with his hand in the box and awarded the Blaugranas a spot kick. Robert Lewandowski stepped up to take the set piece, but his shot failed to test Martinez.

What followed was a series of chances for the Catalans to go ahead only for all of them to go in vain. Most attacks came from the left wing through Jordi Alba and Ferran Torres, but resilient defending from Almeria helped them hang on by a thread and keep it at 0-0 at halftime.

Barcelona did not have to wait long into the second period to take the lead. The goal came from a solo effort from Ousmane Dembele in the 48th minute after Busquets found him with a long-range pass. Receiving the ball, he cut into the Almeria box, skipped past three defenders and slammed the ball beyond the reach of the goalkeeper. Ansu Fati came on for Ferran Torres at the hour mark.

In the 62nd minute, Frenkie de Jong doubled the hosts’ lead. Fati’s initial volley off Alba’s cross was saved well but the Dutchman was there to pounce on the rebound and make it 2-0. Raphinha and Gavi entered the field for Ousmane Dembele and Busquets.

Ansu Fati found scored in the 70th minute but the goal was disallowed as the youngster was in an offside position.

Gerard Pique walked off the field for one last time to thunderous applause amidst a storm of emotions in the 85th minute as he was replaced by Andreas Christensen. It was the highlight of the game and the end of an era in Barcelona’s defence.

The match ended 2-0 in Barcelona’s favour and helped the hosts claw marginally past Real Madrid once again. Xavi’s men will play one last time before the World Cup next weekend before the squad disperse to their National Teams.