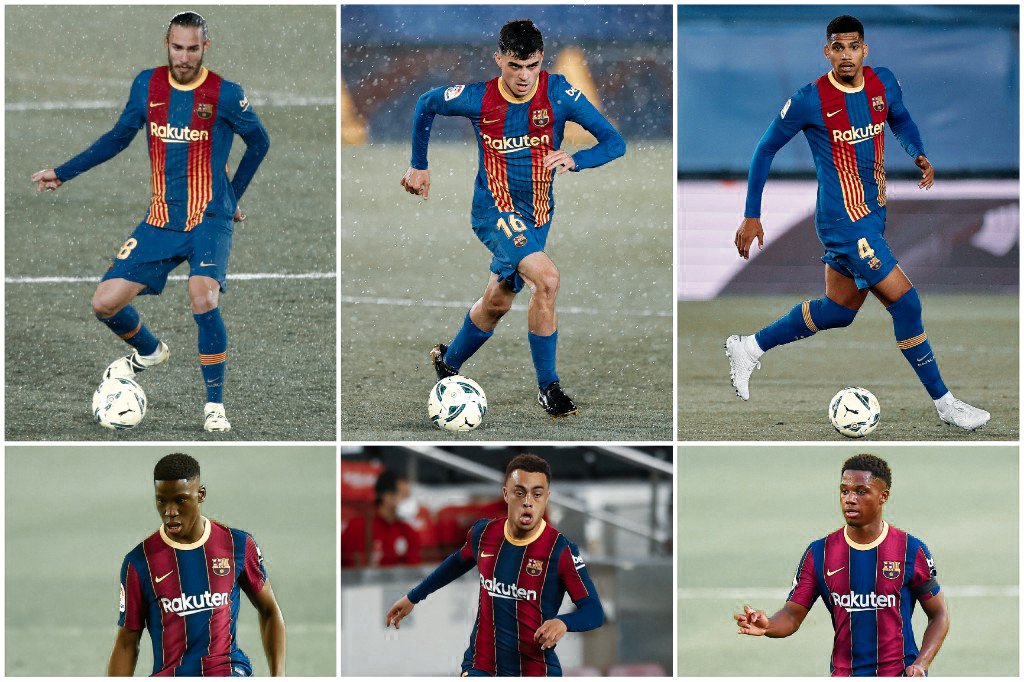 How has playing time been distributed to different age groups in the squad? What does it mean for this season and the future?

It is no secret that Ronald Koeman’s first season at the helm has seen the integration of many young players into the team. Even with the long-term injury to starlet Ansu Fati, the likes of Pedri, Sergiño Dest, Óscar Mingueza, and Ronald Araújo have injected new life into key areas and turned in some crucial performances.

With some of those names in mind, how youthful actually is this Barcelona team? To get a better perspective of this, let us look further into the makeup of the squad, and then see how this version of Barça stacks up to other elite European sides, as well as past versions of Barça.

Minutes going to both ends of the age spectrum

When examining the squad as a whole, the abundance of young players who have made league appearances bodes well for the future. A total of 13,363 La Liga minutes have been played by outfield players age 25 and younger – a very impressive 6,283 of those coming from players 21 and younger.

However, it is also important to note that many key pieces of the squad are at the tail end of their careers. With the likes of Lionel Messi, Jordi Alba, and Sergio Busquets, Barça have given 9,805 minutes to outfield players age 30 and older. These two ends of the spectrum make for an interesting squad dynamic.

This also means that very few minutes have been played by those in what are usually considered the prime years of a footballer’s career. Less than 3,000 minutes have been given to the 26 to 29 age group, with the players in that range largely being used as rotation pieces and some even being linked with moves away from the club.

Nonetheless, there is clearly plenty of reason to be optimistic. Yes, members of the old guard are taking up a large chunk of minutes, but there are a vast number of players breaking through and developing to be ready to take on increased responsibility when that older generation finally does move on.

Even Ilaix Moriba, a talent who has only sparingly received minutes, seems to be among the most promising footballers at the club. Giving him and other youngsters like Konrad de la Fuente, who has only appeared in the Copa del Rey and Champions League so far, time around the first team is very beneficial.

Of course, young players coming into the side from La Masia and overseas is nothing new. However, how does 2020/21 Barça compare to other Blaugrana sides over the last decade when it comes to giving these players time on the pitch?

The youngest side in the club’s recent history?

Looking back over the last ten La Liga seasons, some interesting trends appear for Barça’s young players. The start of the 2010s saw a multitude of talent in the 22 to 25 range, including younger versions of Messi, Sergio Busquets, Cesc Fàbregas, and Thiago Alcántara.

As members of that generation started to age, and more established stars like Luis Suárez, Javier Mascherano, and Ivan Rakitić were brought in, there was far less young talent on the pitch throughout the middle of the decade. The squad, in some ways, peaked together, as reflected by the treble win in 2014/15.

In more recent years, the side has started to get younger. The 2018/19 campaign saw an impressive amount of playing time given to players 21 and younger. It should be noted, though, that those 5,005 minutes were split amongst ten players. Of those ten, only Ousmane Dembélé and Riqui Puig remain in the first team now, just a couple of years later.

This season, however, the number of young player minutes has surpassed the 2018/19 tally by a comfortable margin, and it is even more impressive when considering how the current crop of young talent are occupying key spots in the team.

In 2018/19, Dembélé was the only 21 or younger player to play over 1,500 minutes. This season, Pedri and Dest have already hit that mark, while Mingueza is only 31 minutes away.

Looking at things all together, this current Barça side clearly stands out. It should be noted that this is through only 29 matches this season, not the full 38 that the other teams played. At this current pace, Koeman will have given over 8,000 minutes to players age 21 and younger by the end of the La Liga campaign and over 9,000 to players age 22 to 25 (closest to 2013/14 and 2019/20).

Overall, this definitely seems to be the youngest Barcelona side, at least since early on in the 2010s. The number of teenagers and players barely into their twenties, not only getting cameos but holding down places in the side, is very admirable.

We can see that Koeman’s Barça are more youthful than past sides at the Camp Nou, but is the same true when compared to other top European clubs?

The same trend is shown. Among Europe’s best-performing sides, Barça rank near the top for minutes played by those 21 and younger. Interestingly, the three times ahead of them – AC Milan, Lille, and Monaco – were not in the Champions League this season.

Barça have given far fewer minutes to the 22 to 25 age range than the likes of RB Leipzig, Leicester City, and Manchester United. However, the club are still considerably ahead of Real Madrid and Atlético Madrid – the other two sides in the La Liga title race – for both age ranges.

Taking this information about the squad into account should help add context to this season’s performance and the future of the club. Barça are fielding very young players at an unprecedented rate in the club’s recent history, and more so than many of Europe’s elite.

In this regard, Koeman should be given credit, as he successfully integrated many of these players and fast-tracked their development. Most importantly, though, these numbers reflect a vast amount of talent at the club’s disposal for the future. If this young core develops, Barça should be looking at great success in the coming years.