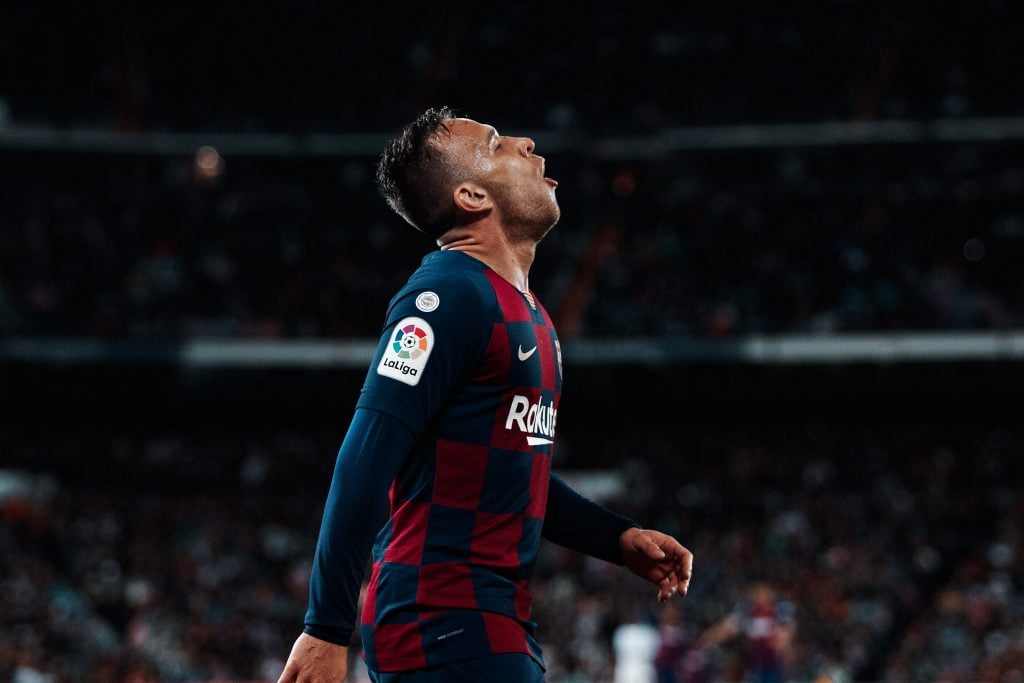 With growing rumours of a potential transfer, Barcelona should protect and develop a midfielder that has all the conditions to succeed at the Camp Nou in Arthur Melo.

Announced in March 2018, and brought in in July of that same year, it wasn’t until 3 October that Barcelona fans fully got to know who Arthur Melo was. Still, that date came much earlier than first anticipated. While excelling at Brazil’s Grêmio, making the leap from South American to European football – not to mention Barça – was never going to be easy. Nonetheless, there he was: Arthur started and delivered an exhibition at Wembley against Tottenham, in the Champions League. His introduction letter came nothing less than in one of football’s temples and biggest stages. The blaugranas beat Spurs by 4–2 that day, and the expectations regarding their new tiny yet influential midfielder started to grow.

With his low centre of gravity, superb passing range, extraordinary ability to shield the ball and turn around, and even the feint and move known as the pelopina, comparisons were often drawn between Arthur and Xavi. And that’s where problems began. The Brazilian has by no means lowered his level – in fact, he has possibly increased it –, but perhaps the lack of continuity on and off pitch problems have prevented him from reaching the heights he was expected to reach. So much so that the board may even be considering including him in one of their much-desired swap deals.

❛ Arthur reminds me of Xavi. When you give him the ball, you feel that he has the ability to retain it ❜

But it must not be forgotten that Arthur is only 23 and, despite it is very tough to find someone with the raw material required to play at Barcelona, Melo certainly has it. His first season was supposed to be of adaptation, of playing little minutes and getting used to Spanish football. Yet he greatly improved those predictions, as he established himself as a regular starter when fit. Now, in his second campaign, he has been supposed to make another step forward. And he has clearly made it. As one of the breakthrough youngsters of the 2018/19 campaign, in the 2019/20 he has been one of the few positive news of this unstable season for Barça.

After a summer in which all eyes turned to the culés‘ new wonderkid Frenkie de Jong, Arthur has perhaps been the most relevant of the interiors when on the field. Many times criticised for his risk aversion, the 23-year-old has been much more forward-thinking and determined this term. If last year he was a joy to watch but did not yet have much hierarchy in the side, this course he has become much more decisive and impactful. While ensuring safe passes in low areas, his vision in the opposing half has been significant as well. Arthur, like De Jong or Busquets, is considered a player to act deep in midfield, but he may well be the most complete and global of them all. Yes, Arthur thrives in deep zones, but also in higher and more congested areas. The number 8 has been much more determined and aggressive towards the opposing goal than before. This campaign he has registered 4 goals and 4 assists in 1.362 minutes in all competitions, compared to only 2 assists in roughly 2.500 minutes last term.

Arthur has the conditions, mostly technical, to be an extraordinary midfielder for Barcelona. His innate ability to evade the press, his personality and self-sufficiency to move the ball out of risky situations when intimidated by the rivals, his accurate passes and controls to favour a fluid possession game, his agility to dance through defenders and carry the ball…But, obviously, he’s still nowhere near the perfect Barcelona midfielder. His dynamism can be extremely useful for a team that at times lacks such activity and charisma, but the objective should be to not transform this dynamism into excessive mobility. Xavi Hernández was a very dynamic interior, but he used it to adapt his position to every situation and to adjust the distances with teammates and opponents. Thus, the Catalan was a very positional interior. Arthur is a very dynamic midfielder too, but this has caused problems more than once as his tendency to get close to the ball makes him invade others’ zones.

❛ That [rarely taking risks] happened to me too. When I was 20 or 21 years old I didn’t take many risks. I didn’t break lines as often. It’s a matter of confidence. He will have it ❜

The former Grêmio youngster looks like a classic Barça midfielder, but he’s far from orthodox for the Positional Play. Outstanding for possession, but not for positioning. For ball retention, but not for passing and positional intention. While compared to Xavi, what made the Spaniard unique was his positional intelligence and delicate handling of distances – which is precisely what Arthur lacks. This, however, can only be learned with time, practise and correction. Xavi didn’t acquire such concepts overnight. Once Arthur learns the when and how to move, he could undoubtedly become the midfielder Barcelona needs.