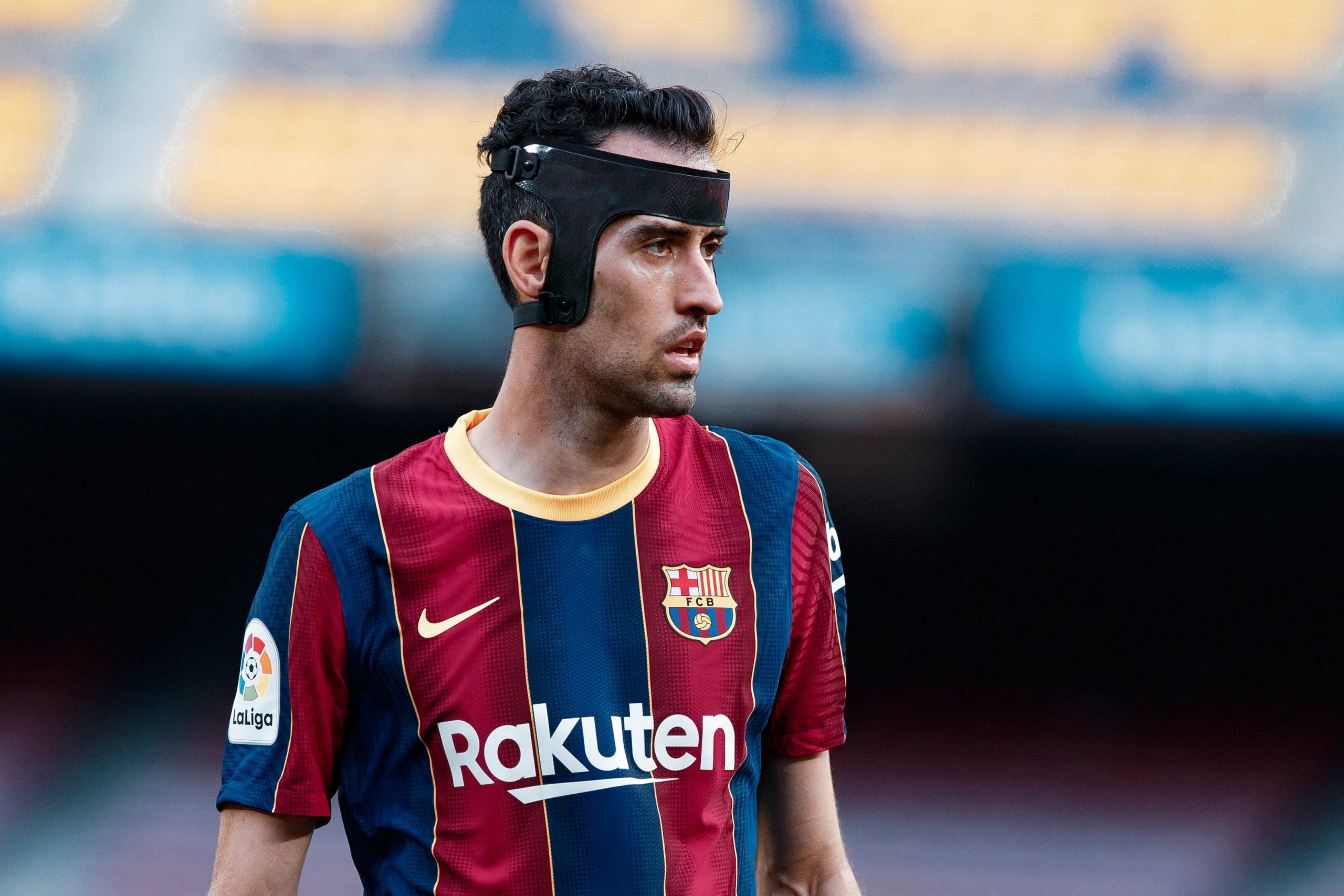 Sergio Busquets has become a household name amongst culés all over the world. He has been playing at the highest level of football for years on end. Often considered underrated, Busquets made the Barcelona team of old tick. But unfortunately for Barcelona’s midfield maestro, his age happens to be on the wrong side of thirty. As time continues to pass, the physical limitations of his body have slowly begun to creep into his performances.

The number five was never the quickest player on the pitch. However, his impeccable reading of the game meant that he would outclass everyone who came up against him. Yet as the seasons went by, the Spaniard began showing signs of slowing down. Many cast him aside as deadwood following the dip in his form.

Despite all the criticism, the world cup winner proved his immense quality in the latter half of the season. After a string of superb performances, Busquets cemented his place as one of the best players in the squad, redeeming himself after his sub-par start.

After the 8-2 drubbing at the hands of Bayern Munich, veterans like Gerard Pique, Busquets and Jordi Alba had their heads firmly placed on the chopping block. With the arrival of Ronald Koeman came a switch to the 4-2-3-1 formation at Barça.

In this new system, Busi was made to play in a double-pivot alongside Frenkie de Jong. This was a departure from the single-pivot system that he was used to playing in. Unfortunately, the change in position severely hindered the Spaniard’s performances. He seemed like a ghost of his former self, even disappearing at times during games.

Yet Koeman’s faith in the veteran remained unshaken. Even after facing substantial criticism, the Dutchman entrusted Busquets with a spot in the starting eleven. But the number five still found it difficult to adapt to his new role. Moreover, shouts for the inclusion of La Masia gems like Riqui Puig and Ilaix Moriba in the lineup were slowly gaining momentum.

Disastrous performances in crucial matches like El Clasico were a major flaw during the season. His lack of pace cost Barcelona the opening goal, with him failing to track Federico Valverde’s run. On several occasions, he was beaten by his man, and his slow speed became even more of a problem because of the general slowness of the Bluagrana’s defense.

By the start of December 2020, morale in the Barcelona camp had hit rock bottom. Moreover, Busquets’ performance levels had dropped as well. Even though expectations for him had been low from the start of the season, many had still hoped that his poor form was just a blip. But by now, most had lost their faith. His future was now up in the air.

One of the major changes implemented was the return to the single-pivot system. With his old role being restored, Busquets had the opportunity to dominate the midfield once again. And took the opportunity, he did. Dictating the tempo of the ball, Busquets took the reigns of the Barcelona midfield and steered it out of the disastrous mess it had been not so long ago.

With the new year, however, arrived a new Barcelona. Fluid passing, quick movement, and incredible mentality saw the team go on a 19 game unbeaten streak. With league leaders Atletico Madrid dropping points, Barcelona were back in the running for silverware.

His entire repertoire of skills was on display as he not only controlled possession but put in the dirty work as well. As the season went on, his importance to the team steadily rose until he became one of the best performers in the squad, anchoring Barcelona’s midfield trio with his experience alongside his counterparts’ youth.

Even when Koeman switched to the 3-5-2 formation, Busi kept up his steady rate of improvement. He justified the manager’s faith in him. His defensive output has decreased, though, with his tackles and interceptions dropping from 3.7 per 90 in the 2019/20 season to 3.3 per 90 in the 2020/21 season. But what he lost on the defensive side, he made up for it in the creative aspect.

Even in this rollercoaster season, Busquets has had his fair share of incredible performances. But, especially at the tail end of the season, Busquets let the beast out of the hat. He efficiently applied his incredible range of passing and elevated his game to a more complete version.

The Spaniard had more touches in the middle and final third than any of the previous three seasons, with a total of 1926 and 618, respectively. As a matter of fact, his touches in the attacking third saw a 32% increase compared to the highest in the past three seasons.

Back in the heyday, Busquets had the likes of Andres Iniesta and Xavi Hernandez to take care of playmaking. However, in the 2020/21 season, the Spaniard had to extend his array of abilities to accommodate the lack of creativity.

When the team struggled to break opposition lines, the Spaniard delivered breathtaking and inch-perfect deliveries to set up goals on a platter. For a defensive midfielder, his output of 5 assists is commendable. But the truly astonishing fact is that three out of his five assists consist of line-breaking balls that left defenders for dead.

When it comes to the UEFA Euro winner, it is essentially impossible to pinpoint moments of brilliance. Yet, he has left fans in awe with some of his performances.

In the Copa Del Rey Final, the number five rose to the big occasion. He nearly opened the scoring when his attempt was saved from point-blank range. He also found Messi with another brilliant pass in a move that Unai Simon thwarted. Busi’s However, awareness meant that he kept the Athletic Bilbao forwards on a leash.

Whenever Barcelona managed to score a high number of goals, Busquets was surely involved in the build-up. Be it the 6-1 win against Real Sociedad or the 5-2 win against Getafe, the midfield maestro was at his best. Against a difficult opposition in the form of Getafe, it was his beautiful pass that led to the opening goal Even in games that Barcelona lost, like the defeat to Celta Vigo, Busquets maintained his high level of performance.

His interceptions and tackling were decent and his passing was perfect as always. Throughout the season, his passing was even more accurate than before, going up from the already impressive 90% accuracy to 91%.

The man behind the curtain: what next?

When it comes to Sergio Busquets, his contributions are not easy to observe for a layman when he is on the pitch. While he doesn’t excel at glamorous skills like other players, he does the simple things phenomenally. He masterfully orchestrates the match, ensuring the smooth circulation of the ball from defense to offense. His efficiency is remarkable, and his control and anticipation are unrivalled. But his efforts often go unrecognized by the casual observer.

“Having played against him, in the end, you stop pressing him because it’s just so frustrating. You can’t get near him, you can’t get the ball off him, you can’t get close. If you come out of your position to press him, he pops it around you – and you can’t do it for 90 minutes because you’re using useless energy up.”

The significance of his role can only be felt in his absence. This was particularly on display in the 0-0 draw against Atletico Madrid. When the defensive midfielder was subbed off due to an injury, Atletico asserted their dominance over a shaken Barcelona midfield. Without the veteran controlling the middle of the park, players like Marcos Llorente ran riot.

The Spaniard may not be as fit as before, but his mind is as sharp as ever. As long as the Catalan continues to play, he can be counted upon. But eventually, he is going to retire, and his replacement needs to be found. Whether it is from La Masia or a new signing, it is evident that his profile is essential to Barça’s style of play.

Sergio Busquets had one of his best seasons in years. Some of his performances reminded fans of the times of old when Barcelona was on top of the world. In a season when the team went through phases of brilliance and periods of sluggishness, the Barça legend was one of the few positives. Despite having a rough start, the Catalan built on his weaknesses. Easily among the top five performers at FC Barcelona, Busquets was back to his brilliant best.

He went through ups and downs, but he managed to overcome his shortcomings. Moments of brilliance cannot erase the first half of the season. However, Barça Universal feel that the tactics chosen by Ronald Koeman also need to be taken into account.

Busi did not keep a foot wrong when it came to his passing ability. His attacking output also saw an increase. But he has dropped his defensive performance when compared to previous seasons. Considering all the factors, the final rating for Sergio Busquets is 7.25.