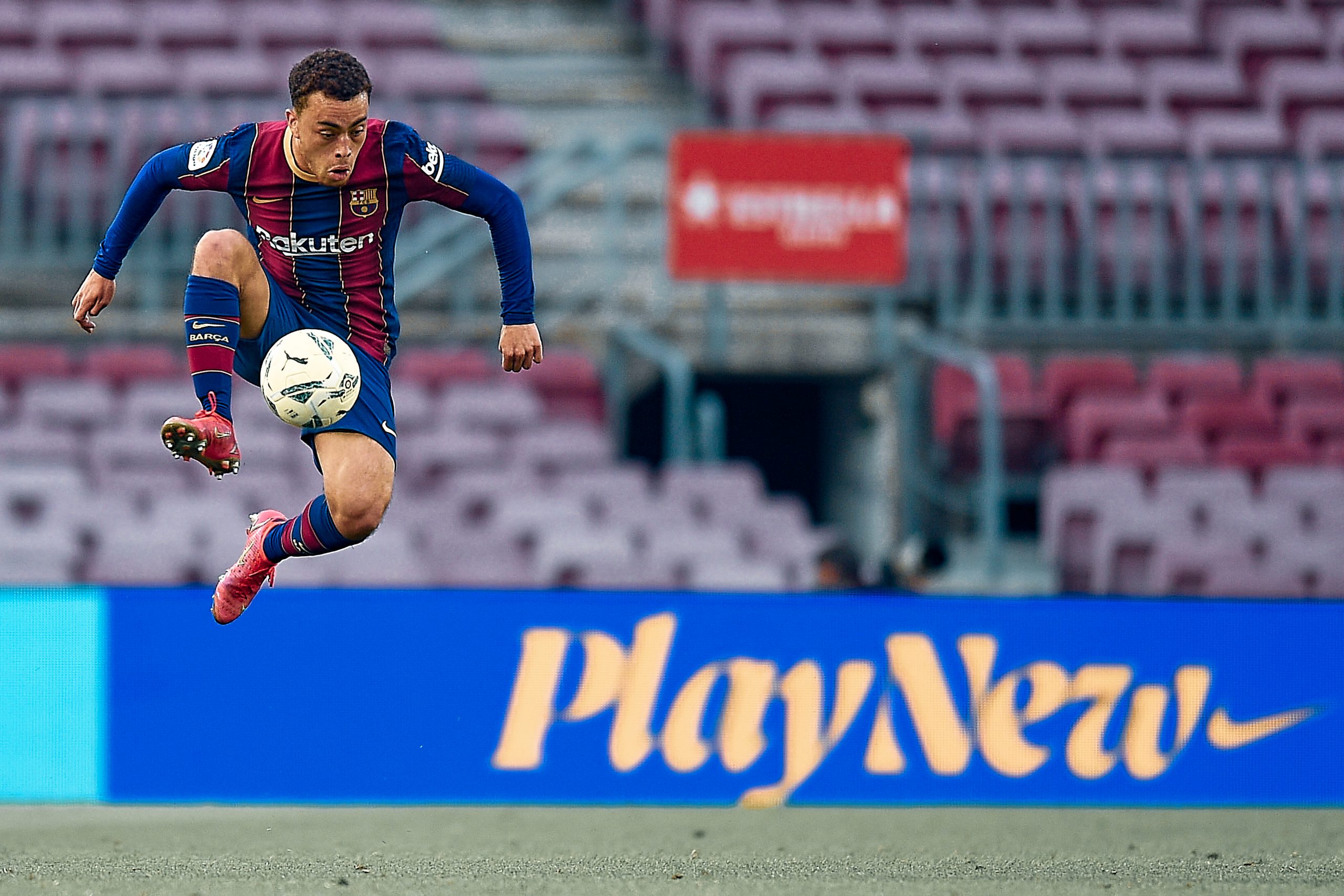 A long drawn transfer saga came to an end on 1st October 2020 when Barcelona announced the signing of Sergino Dest. With Champions League winners Bayern Munich very interested in the USMNT star, the deal came off easier than expected for the Catalans.

Through a combination of their rich history, the symbolic Ajax-Barcelona connection, and the influence of certain Dutch players in the Barcelona roster helped boost the affair. Dest joined with his new teammates soon after and took over #2 jersey, now vacant after Nelson Semedo’s departure.

The right-back position has been of particular concern in Barcelona since the departure of Dani Alves. Sergi Roberto adapted to the role but never showed signs of developing into a complete full-back. Lack of competition, in addition to profound sympathy of fans, facilitated his over-stay. Nelson Semedo, on the other hand, was defensively able but lacked ideas in the final third. His passive play skewed Barcelona’s play and brought up imbalances that could be easily preyed on by oppositions. This history of mediocrity in the right-back position put the spotlight on Sergino Dest, supposedly the long term solution to Barcelona’s shortcomings.

The cloud of expectation

The expectation at Barcelona is one of the underrated terrors in the football world. The pressure from the coach, media and fans can often crack a player’s resilience. Heading into a team that has been plagued in his position, Sergino Dest had his work cut out for him.

However, with Sergi Roberto still in the fray, one did not expect Dest to get much game-time in his first season. Given his tender age of 19 at the time, one looked forward to a season where the American could slowly prove his worth. Culès expected it to be a season of transition for the newcomer, one where he could adapt and establish a name under Ronald Koeman.

Nevertheless, expectations on the pitch were different. Before his arrival, the American was known to be an explosive force in attack. Defending was an aspect where the youngster still had flaws. However, dribbling, passing, pace and agility gave him the X factor that Barcelona desperately sought.

With him on the pitch, one hoped to see a more symmetrical and balanced attack from the Blaugranas. Jordi Alba had been overburdened in the past few seasons, and Dest was signed to take some weight off the Spaniard’s shoulders. Getting behind the defenders on the right-wing and laying in crosses would set him apart from his predecessor.

The USMNT defender did not have to wait long before his awaited debut. Just four days after the confirmation of his transfer, the youngster stepped onto the field in the garnet-and-blue. An injury to Jordi Alba in the finals stretch of the game against Sevilla forced Ronald Koeman to make a change, and Dest did not disappoint.

Despite having to play out of position on debut, the youngster kept his cool and announced himself. In just fifteen minutes, Dest recorded a crucial interception, a successful long ball and a key pass. The 100% pass accuracy was the cherry on the cake.

Jordi Alba’s injury meant Dest would get two further starts in the coming games, albeit out of position. In the subsequent encounters against Getafe and Ferencvarosi in the Champions League, he played as the left-back. The display against the Madrid outfit was a mixed one for the new signing. Dest was dribbled past thrice and failed to get a single cross completed. However, the subsequent outing was a promising one, with the No.2 putting up a solid show in defence.

His first start in his niche position was in El Clasico. Koeman surprised the world by trusting the youth ahead of veterans, and Dest was one best performers on the field that night. Despite going on to lose the game, the right-back had a decent game. He did well to keep Vinicius Junior in check and was a firecracker in attack with his neat footwork.

Subsequent appearances against Alaves and Dynamo Kyiv did not present anything out of the ordinary. Despite having a good record in dribbles and key passes, the final product was missing. Moreover, slight struggles in defence were conspicuous.

Sergi Roberto’s injury against Atletico Madrid came as a boon to Dest. It could not have happened at a better time. Just as the Barcelona fourth captains stocks began to rise and Dest’s to fall, the former was ruled out for over two months. The newly opened window provided Dest with a leisure 70 days to integrate with the side and establish himself. His prolonged playing spell commenced with the clash against Dynamo Kyiv, where he opened the scoring in the 52nd minute.

From there on, his season began to oscillate. What Dest has provided the side with is a record with performances on either end of the spectrum. And that, in a nutshell, has been Sergino Dest’s season: inconsistent.

The season’s highs give hope

Arguably, Dest’s best performance of the season came against Real Sociedad in Round 28 of La Liga. At the Reale Arena, the American international was unplayable. He scored twice in the opening half and steered Barcelona to a rampant 6-1 victory. Moreover, he shut down Sociedad’s left flank and outplayed Mikel Oyarzabal. His dribbling prowess came to the fore in attack as the USMNT star created chances and got into scoring positions repeatedly.

The quality has never been in doubt. The right-back has shown versatility and attacking ability on multiple occasions this season. Apart from the aforementioned game, the displays against Real Valladolid at Jose Zorilla, Levante at home, and Granada away were some of his best.

On the bright side, the 20-year-old has given the side what they have needed: a fairly complete right-back. His comfort on the ball is a facet that equips him well at Barcelona. With his pace and agility, he can track back and hunt on even the quickest of opposition wingers.

In attack, Dest is a massive upgrade to Barcelona’s previous options. Whilst others in the past failed to make amends in attack on the -wing, the youngster has brought in much-needed proactivity. He is fearless going forward and readily takes on the defenders to create openings. However, what has stood out about the young lad is his dribbling. Dest is blessed with quick feet and magical footwork. Combining the two, he has seamlessly taken on defenders and got the better of them. Such potency in attack can only be a sign of great things to come.

The result is visible in his statistics. The young star is in the top 96 and 90 percentile in progressive carries and dribbles completed respectively, compared to fullbacks across the top five leagues.

Last but not least, he has proven to have a killer strike. Sergino Dest has scored some stunning goals this season from relatively difficult angles. He records a venomous shot, an attribute that boosts his stocks. One wonders if his future could lie as a winger.

A lot glittering, but not a lot of gold

As high as the peaks have been, one cannot deny the pitfalls of the new signings season. On the one hand, Dest has struggled to back up his big games with more promising displays. However, his poor runs of form have been no transient occurrence either. A sub-par outing was almost always followed by a dry run of a few weeks before the occasional gem. That, in short, has been the biggest shortcoming in Dest’s season.

Despite playing a major chunk of his minutes in the final third, the American has only managed the one assist in his League campaign. Clearly, the intent is not being converted to results. One gets the feeling that he tried too hard and overcomplicates simple situations. In addition, his crossing accuracy has been poor, an aspect Barcelona desperately needed artillery in.

Sergino Dest has only averaged 3 progressive passes per 90, a statistic that puts him in the bottom 23 percentile when compared to fullbacks across the globe. His attacking flair is very evident in his progression of the ball, however coming up with just 0.04 expected assists is a serious concern.

Nevertheless, one cannot deny the fact that his liveliness in the box is something Barcelona have lacked for years. It is like a child looking in anticipation as a firecracker that threatens to light up the sky with every passing second.

While his attacking flair has been a clear boost, his statistics in defence speak a tale of their own. With just 1.5 tackles per game, Dest averages in the bottom 25 percentile. More concerning are his numbers in clearances and aerial duels won, lying at a meagre four and two percentile, respectively. A lot of the blame could be pushed onto the 3-5-2 formation that gave him more freedom up front, but a wingback is expected to do better nevertheless.

The low standards and expectations at the Right-back position have been a blessing to Dest’s season. Owing to the mediocre history in the position, a bang average season for the USMNT player seems to be a massive upgrade. Inconsistency, poor defence and the lack of a final product all contribute to a low score of 5.5.

The arrival of Emerson Royal will put the former Ajax man under more pressure. The coming season will be critical in determining Dest’s long term continuity. It is understandable that at 20, he is at a very early stage in his career.

However, two years is enough time to frame opinions on one’s future, more so in Barcelona. Emerson’s impressive record in defence will keep Dest on his toes, and the competition will be one to look out for. Moving into the 2021-22 season, the youngster will have to ramp up his productivity in attack to take the burden off Jordi Alba’s shoulders. It is not a want, it is an urgent need.