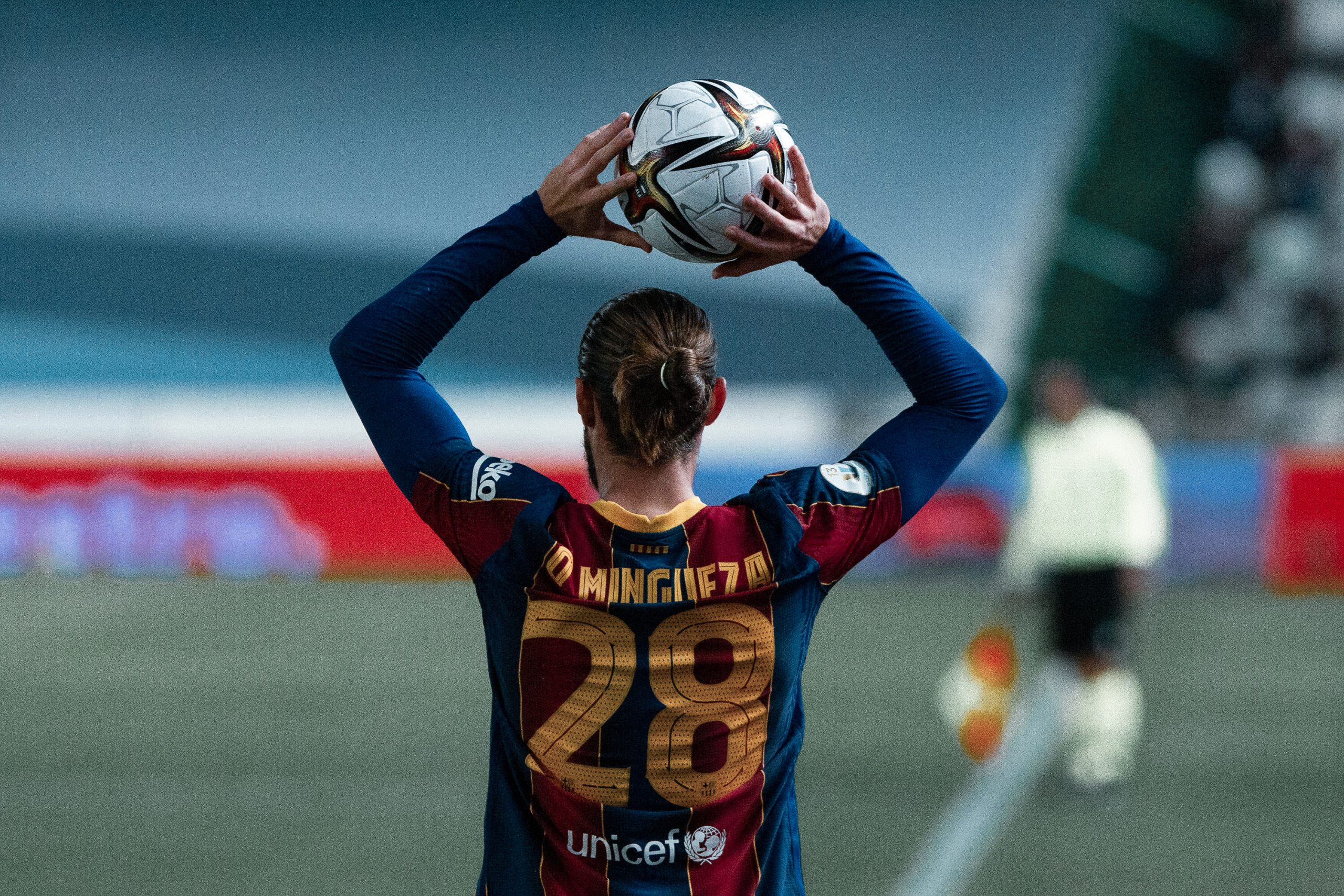 Over the years, La Masia has built a reputation for unearthing talents. The players who successfully transition to the first team are invariably a notch higher than their comrades. Be it by an awareness beyond their years or a natural way with the ball; some players stand out from the crowd. Through meticulous screening at various levels, the creme-de-la-creme separate from the herd.

However, sometimes the best of players need not be child prodigies. The approach of La Masia does not provide an equal pedestal to all aspirants, with only the brightest little stars given the step up. The world has seen enough examples in the past to attest that talent at a young age does not guarantee a future star. Anderson, Alexandre Pato, Mario Gotze, Anthony Martial, Renato Sanchez are all recipients of the prestigious Golden Boy award.

Once considered the best young talent in football, all these players have not recreated that stardom since. Barcelona’s very own Bojan Krkic shows that not all prodigies touch the stars.

While scouts instinctively use their eyes to filter out the gifted players, the rest of the herd are in the shadows. The possibility of a gradual development does not sit well with big clubs. Such players have the world against them. They do not get the hype, fame, sympathy from the fanbase or the internal support. That is what makes the story of Oscar Mingueza special, for he has found a way into Barcelona’s first team despite not possessing any prodigal talent.

A shot in the dark

Barcelona’s decision to loan out (and now sell) Jean-Clair Todibo without a backup left them in jeopardy. Gerard Pique and Clement Lenglet were undoubtedly the first choice centre-backs. Ronald Araujo’s promotion made him the third centre-back in the squad. However, the fourth spot was unclear.

Samuel Umtiti was neither in Ronald Koeman’s plans nor on the squad list for the opening games of the campaign. Santiago Ramos Mingo, Barcelona B’s mainstay centre-back, was chosen as the backup option for the first team. However, after two games with the senior side, Mingo was recalled by the subsidiary coach Garcia Pimienta.

In his place, Oscar Mingueza stepped in to fill in the first team vacancy. The young academy product was not a first-choice defender, even on Garcia Pimienta’s side. He had Arnau Comas, Mingo and Mika Marmol ahead of him in the pecking order. The Spaniard was sent to the senior side to fill in the numbers merely.

Mingueza stuck to his bench role diligently for four games. Not in his wildest dreams would he think of stepping on the field for the first team. However, when veteran Gerard Pique had to be taken off due to what many feared to be a season-ending injury at the Wanda Metropolitano, the situation escalated.

A glimmer of hope

Staring into the upcoming clash against Dynamo Kyiv in the Champions League, Koeman had none of Pique, Araujo or Umtiti at his disposal. Out of a lack of options, the Dutchman deployed a combination of Clement Lenglet and Oscar Mingueza on the night. The mentality with which that golden-locked young lad walked onto the field took everyone by surprise. What nerves, what pressure?

Making his debut for the first team, Mingueza took charge of the defence. Not only did he record six interventions and a block, but he also had the second most number of touches, only behind fellow academy graduate Carles Alena. Moreover, he provided an assist for Martin Braithwaite’s first goal. Though he was not perfect, Mingueza opened up the eyes of fans, compatriots and coaching staff that night. He stamped his authority on the game and made the best possible start to an inspirational story.

The new spark in his story at Barcelona garnered praise from the coach and fans alike. His solid and composed display encouraged Ronald Koeman to lay more chances his way, which he grabbed with open arms. From then on, Mingueza featured in 35 of the Catalans 28 games, cementing his spot in the team.

Following his debut, Mingueza ensured his newly laid cement foundation set and hardened. A masterful display against Osasuna saw the youngster involved in a whopping five clearances. With Clement Lenglet walking off injured during the proceedings and Pique, Araujo and Umtiti all unavailable, the No.28 took the baton and held Barcelona’s clean sheet. A few days later, he was again one of the best players on the field in Budapest. While Ousmane Dembele and Antoine Griezmann wreaked havoc in the final third, Mingueza ensured that the hosts did not get a sniff of goal.

The black spot on a golden wall

During Barcelona’s deep defensive crises, the golden-locked Mingueza pulled the team through. His innate leadership and self-driven mentality saw him past any obstacles he faced. When Barcelona lacked a voice, he did not hesitate to take the lead. Where talent did not suffice, hard work patched up for it.

On the field, Mingueza provided so much more than his mere defensive prowess. In terms of ball distribution, he was one of the best Koeman had at his disposal. Growing up at the club’s academy, the Spaniard’s comfort and awareness on the ball was astounding. He had a knack for finding difficult penetrative passes that others, including his partner Araujo, would have missed.

Moreover, the No.28 was as versatile a player as Barcelona could ask for. Despite primarily being a centre-back, Mingueza was called on countless times to play as a wingback. Despite being out of his waters, the youngster rarely put a foot wrong in these non-niche positions. He ensured defensive solidity in his countless games as a right-back despite not providing much in the final third. However, one must admit that as the season progressed, his stocks in the attacking third multiplied manifolds.

However, there was one black mark on this wall of gold- Inconsistency. Indeed, the young defender would provide solid performance in four out of five games. However, inbuilt with that came the frequent ‘off day’ when he looked out of his depth.

The first such game was the affair at Estadio Ramon de Carranza when Barcelona took on Cadiz. In just the eighth minute, a moment of madness from the No.28 saw him head straight towards his own net. It was an own goal by Mingueza that went against Alvaro Gimenez’s name owing to a deft touch. From that moment on, the young Spaniard was invisible. He was eventually replaced at half-time for Pedri.

After a brief hiatus, he returned to the starting lineup against Real Sociedad in Round 19 of La Liga. In what was the rise after the valley, he once again exuded confidence in the next four matchdays. Against Real Valladolid, the youngster recorded a staggering seven interceptions and a vital clearance.

Mingueza notched up fine displays against Valencia, Eibar and Granada too before he again fell flat against Athletic Bilbao in the final of the Supercup. Coming on in the 45th minute to take over the right-back position, he too struggled against Inaki Williams.

Barring the occasional off game, Oscar Mingueza barely looked out of his depth. For a player coming right out of the Spanish third division, he never let the aura of first-team importance get to him. Moreover, he always made up for his stoops with a quick recovery.

As the season progressed, the youngster pushed his limits and excelled further with every passing game. His immaculate understanding of the game began to show. The perfect timing of his tackles reflected another aspect of his game that could not be ‘learnt’. He seemed to be growing equally on all dimensions. As his defensive awareness grew more refined, so did his distribution and awareness of when to venture forward. He and Araujo have provided a massive ray of hope in the backline.

An event that stands out vividly in his season is the 5-2 win over Getafe. While the scoreline reflects it to be a one-sided game, it is far from the truth. When Barcelona were clinging from a 3-2 advantage, the No.28 ventured forward while the coach felt it was unnecessary. The scenes that followed were dramatic.

Koeman screamed at him from the touchline before subbing him off and refusing to look at him as he walked past him. A lot was made in the media, with arguments from both sides going hard at each other.

“Maybe I was a bit exaggerated because he’s having a great season. The youngsters have to learn that with Barcelona you have to always be 100 per cent focused in every game. His substitution had no relation with my anger,” Koeman said after the game.

This episode brought to light Mingueza’s elite mentality. In the world of emotionally fragile personalities in the game, Oscar Mingueza showed how to brush it off one’s shoulder and keep moving. He returned in the very next game with a wonderful assist for Antoine Griezmann’s opener and an immaculate defensive show.

Close to the elite youngster debate — but not quite there yet

Undoubtedly, Oscar Mingueza has been a crucial part of Barcelona’s season. However, while the likes of Pedri and Ilaix Moriba are recognised as generational talents, the No.28 still seems far from it. Only a select few consider him to be on his way to being an elite footballer, while most dismiss him as a bench player.

Performance-wise, this is disrespectful to the young talent. However, one must agree that Mingueza still has a lot to learn and grow before being included in the list of defensive prodigies.

While he has been solid for a good part of games, he has often had spells of invisibility. At times, he looks totally out of position or even out of ideas. Rash decision making has been another aspect of his game that has come under criticism, with his style of defending describes as rash or crude. There is indeed a lot of refining required for the youngster, but most are correctable via regular game time.

Having flaws is an inherent part of any sportsman. With his elite mindset, one can only expect Mingueza to get better with the passing season. Moreover, he has age and opportunity by his side. For his hard work and contribution to the side’s season, he deserves a higher rating. However, considering the areas he still needs to work on, 75% seems to be fair. With his determination, he will undoubtedly have a key role to play for the Catalans in the years to come.

For having masked Barcelona’s defensive fragilities to a major extent, the no.28 deserves all the praise in the world. To be a bench player for Barcelona, he has more than the required characters and attributes. However, with Eric Garcia coming in alongside the usual competition in Gerard Pique, Clement Lenglet and Ronald Araujo, he will have his work cut out to establish himself as a starter.

Towards the end of April, Mingueza renewed his contract with Barcelona in a deal that sees him at the Camp Nou until 2023. A prospect that all of the club’s supporters should look forward to.