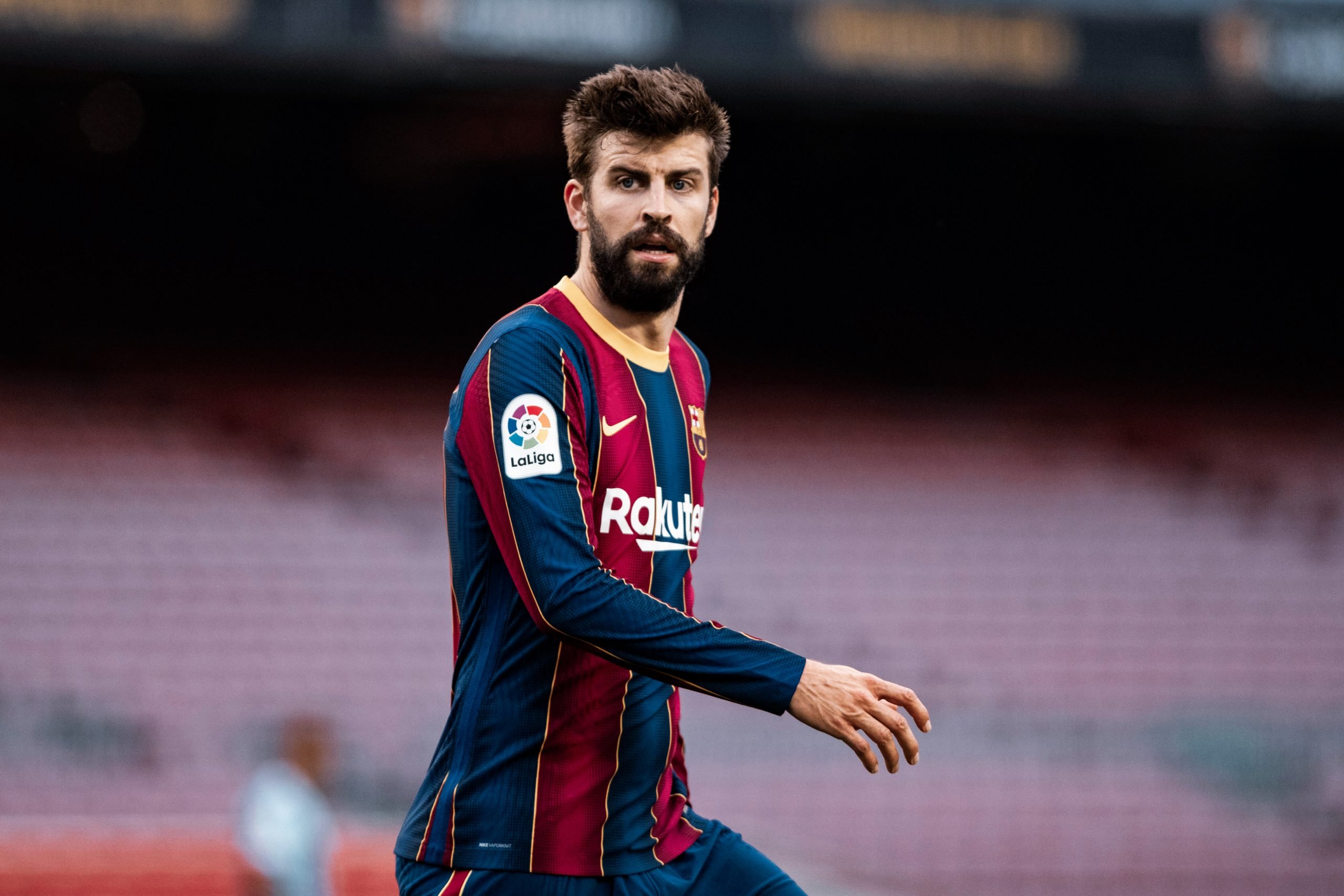 Gerard Pique’s season with Barcelona can be best described as volatile. So much so that the peaking and troughing graphs of cryptocurrency rates would be put to shame. And similar to the investors who put their faith into the virtual stock, Pique’s displays have created an equal ruckus of emotion within the hearts of the Catalan faithful.

In a topsy-turvy season, Pique has been on the sidelines for an inordinate amount of time. He made a hero’s return after sustaining a heavy injury to his knee in November 2020 against Atletico Madrid. Still, after a while, his presence on the pitch was nowhere near as assured as it was before. More than physically, something seemed off, as his performances were marred by uncharacteristic individual errors.

On the one hand, the veteran defender served as one of the biggest protagonists in Barcelona’s majestic run to their record 31st Copa del Rey title, while on the other, he was one of the biggest antagonists in their downfall come the end of the season. A strange collapse, to say the least, as the Blaugrana were their own undoing in the final stretch of La Liga.

Joan Laporta described the way Barça lost La Liga as “incomprehensible”. Perhaps rightfully so; the Garnet and Blue proved to be their own undoing. And despite being in and around the recovery room more often than not, Pique’s ‘limited’ involvement this season has been felt on both ends of the spectrum, with the club calling time on a confusing transition season.

Innumerable things have gone wrong for Barcelona throughout the 2020-21 campaign. The plodding start to the season from Ronald Koeman’s men is well-documented. Coming off the back of one of their most dreadful years in history, there was hardly any expectation.

With the morale down in the dumps, the husk of a broken squad took the pitch, while organizational chaos behind the scenes built up to the club’s greatest financial crisis in its 122-year history. A string of bad results in La Liga meant Barcelona were lying well outside the top four in the early stages of the season, with the poor form and mentality seemingly having carried through to the next season.

Things went from bad to worse for Gerard Pique personally, as the 1-0 loss to eventual champions Atletico Madrid not only dented Barcelona’s title charge further but also led to a devastating knee injury. One that was initially believed to have ruled out the centre-back for the remainder of the season.

The World Cup winner then opted to undergo a conservative treatment therapy to avoid the operating table, which would have certainly spelt the end of his campaign. A ligament injury, being one that usually bears a ton of complications, similar to those plaguing youngster Ansu Fati at the moment, meant that Pique would not be seen till late February.

Even then, the pace of his recovery was staggering since the initial time frame for his recuperation was expected to be four months. So naturally, this led to concerns that the defender was being rushed to partake in the crucial Champions League tie against Paris Saint-Germain. And sure enough, he did feature in the Round of 16 first leg against the Parisiens.

After a downhill spiral, though, the new year brought a fresh sense of positivity to the Barcelona camp. With the departure of Josep Maria Bartomeu and his board of directors, the reign of tyranny had come to an end. Following a whirlwind presidential election, Joan Laporta returned to the helm as president of the club. The change of scenery lit a spark within the team, which, even without Pique, started to play some dazzling football and clawed their way back into the title race.

In February, however, the decision to thrust Pique into the fray for a match of this calibre after nursing a serious injury and over two months without a single taste of competitive football had calamitous consequences. PSG ran riot at the Camp Nou, inflicting a 1-4 defeat on the Blaugrana and effectively ending their European dreams right there and then.

During the game, the 34-year old was dragged around by the opposition’s pace and intensity on the break, like a ball on a string. A picture of the Spaniard trying to hold back Kylian Mbappe by pulling his shirt went viral, but in Barcelona’s context, for all the wrong reasons.

After the rout at the hands of PSG, something seemed to spark within the side, as they went on a remarkable run of results in the league. But most prominently, the Copa del Rey proved to be a massive redemption arc for Gerard Pique.

Following a heroic comeback in the quarterfinals against Granada, Barcelona faced the near-impossible task of overcoming a 2-0 first-leg deficit in the semis. That, against a fantastic Sevilla side led by Julen Lopetegui, who kept proving their pedigree no matter who they played.

After a nervy 93 minutes, Barcelona held a 1-0 lead, but it would not be enough as they seemed certain to crash out of the one competition they had the highest chance of winning. Gerard Pique, however, had other ideas. In the 94th minute, the Catalans surged forward, and a pinpoint cross from Antoine Griezmann was propelled home with a towering header from the Spaniard. The homegrown boy once again came up trumps for Barcelona to further solidify his legacy.

The eventual 3-0 victory in the semis proved that the team was changing. It was healing and banishing the ghosts from last season. And their vocal leader, so solid at the back during the past decade, had led the charge. However, the win came at the cost of the 34-year-old as his knee suffered once again due to the strain, and he was sidelined for well over a month.

The second leg against PSG brought positive sensations despite the elimination, as did the results in the league. The centre-back was even poised to return for the Clasico but no amount of painkillers and corticosteroids proved enough to take the risk. The loss to Real Madrid was another blow to the Azulgranas title hopes, but it was time to focus on the Kings’ Cup.

The team showed up with a display worthy of champions, securing their only bit of silverware this season. But it was an invaluable award that brought nothing but optimism for the future. Pique was wonderful in the final as Barcelona beat Athletic Bilbao 4-0 to lift the trophy. As for the centre-back, he headed straight to the goalposts to cut off the net with scissors.

Things turned sour shortly after, as he would then be a major part of the team’s undoing in two crucial league games against Granada and Levante. Against the former, Barça had the chance to reach the summit of the La Liga table for the first time in the season. But a second-half collapse resulted in a 2-1 loss, with Pique being one of the key perpetrators.

For Jorge Molina’s winning goal in the 79th minute, Geri left far too much space between him and the Granada frontman, allowing him to nod home and salt Barcelona’s wounds. Against Levante, he was toyed with far too easily and against Celta Vigo in the next game, he failed to get close to his man as Barcelona failed to win their third game in a row. The first sign, perhaps, that Barcelona need to invest in a new world-class defender.

As the season ended, it was fairly obvious that the veteran’s physical issues had affected him. And not just the injuries, but his age was bound to catch up to him. Naturally, he does not have the legs to keep up with the pace of the opposition all the time anymore. While his positional intellect persists, his body does not quite respond.

The most accurate reflection of Gerard Pique’s turbulent season would be a 6/10. Despite it not being anywhere near his best campaign, he has provided glints of inspiration in the 23 games he played. And even in moments where he has not, he has paved the way for some interesting changes in the future.

His injuries have allowed Oscar Mingueza and Ronald Araujo to step into the spotlight and once again demonstrate that Barcelona is a breeding ground for immaculate talents. Pique has already said in the past that he is willing to move down the pecking whenever the time comes.

With Eric Garcia’s return to his boyhood club complete, and with Barcelona set to carry out a revolution to shake out all the issues that have caused their downfall over the years, it is obvious that the 34-year-old’s time at the club is nearing the end.

The Blaugrana have plenty of home-grown talent to look towards and a lot of options in the market to keep their eye on. But Pique must be phased out gracefully, as he has been a champion on and off the pitch for this badge. Even during his time out of action this season, he spoke out against the injustices of the previous board.

As a Claret and Blue, through and through, it is typically poetic that Gerard Pique will slowly usher in a new era for the club while the sun sets and the horizon draws closer on his own journey.