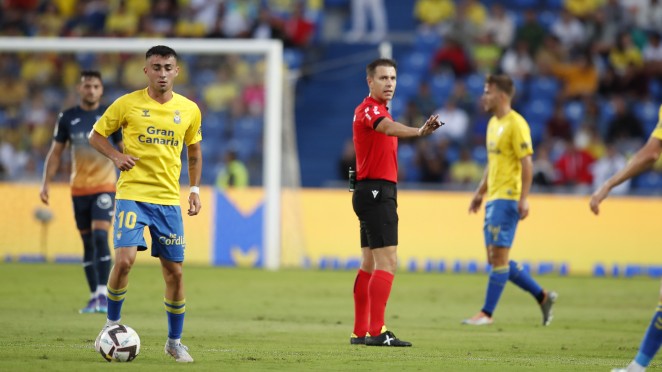 According to Diario AS, Barcelona are considering stepping up their efforts to sign Las Palmas prospect Alberto Moleiro, who is gaining interest from the likes of Real Madrid, Liverpool and Borussia Dortmund.

The 19-year-old Moleiro is regarded as one of the best young attacking midfielders in Spain and was backed to follow the Pedri route from Las Palmas to Barcelona this past summer.

However, the Spanish second-division club demanded a sum of €10 million in fixed and another €15 million in variables, which the Catalans could not meet due to their economic limitations, leading to the move falling through.

Barcelona, though, have maintained their interest in Moleiro and are now considering making a swoop for him in the January window as Gerard Pique’s retirement will help clear up salary mass while they have funds left over from the summer after the activation of levers.

The idea would be to sign Moleiro in the winter and loan him back to Las Palmas for the remainder of the campaign to continue his progress.

It would be a strategic move from the Blaugrana as Moleiro currently has a release clause worth €30 million in his contract with Las Palmas, which will double up to €60 million if they earn promotion to La Liga, which could be on the cards.

However, Barça will face competition from arch-rivals Real Madrid, who also made attempts to sign the 19-year-old in the summer but could not strike an agreement with the player. The Merengues are still keeping tabs on Moleiro and would be interested in reviving their efforts to sign him.

Apart from Real Madrid, Liverpool are also said to have entered the fray for Moleiro’s signing. The Premier League giants have invested in promising youth talents like Fabio Carvalho and Calvin Ramsay in the recent past and could be seeing the Las Palmas ace as another smart signing with an eye on the future.

With rising interest in him and the threat of the release clause amount doubling, Barcelona seem ready to accelerate their plans for Moleiro. But given that there are other priorities for the winter, it remains to be seen if they can close the deal for the teenager.