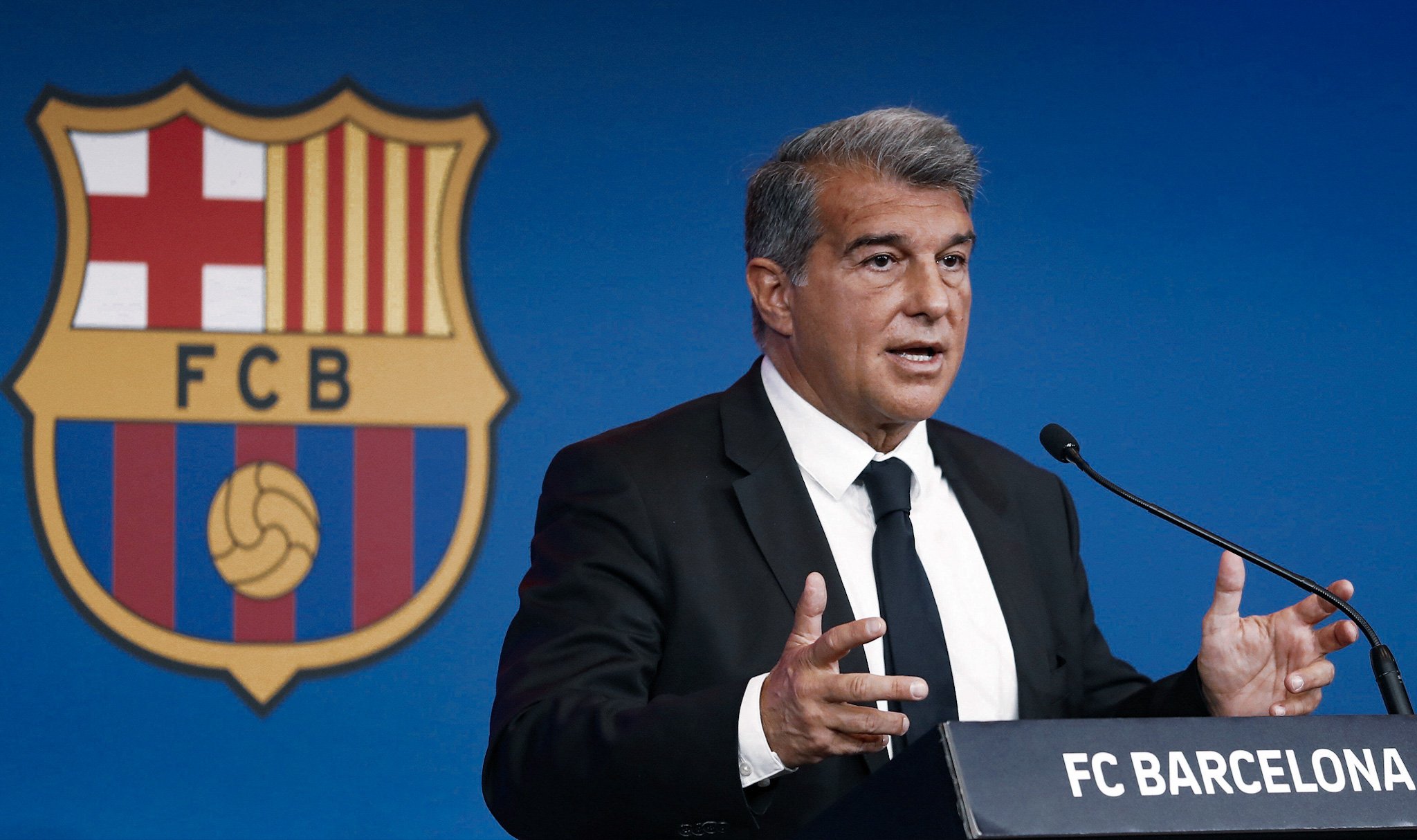 Barcelona has been a colossal car crash in the making in the last five years, courtesy in large parts to Josep Bartomeu, who had no direction for the club, and eventually, was unable to even finish his tenure as head of administration. The best president the club has ever seen — Joan Laporta — won the elections that took place in March, and was appointed to lead the club into a new era.

The task at hand, however, is a behemoth and requires transparency. Laporta addressed the media as part of a press conference scheduled to cover topics such as the economic, sporting, and institutional crisis at the club.

Laporta started the presser by stating the reason behind the gathering, “The purpose of this press conference is that we have to explain ourselves. T explain the decisions we are making these days.”

Naturally, fans have been restless for way too long now, and the new administration already understands that. Laporta mentioned the same, saying, “We are sensing a lot of impatience around the club. A project that did not work has ended, and we are beginning our new project that will bring lots of joy to Barcelona.”

A large part of the impatience stems from a largely underwhelming season Barcelona have endured. It was supposed to be a transitional season, but Laporta has always maintained his stand that a club of the level of Barça does not have such campaigns: “At Barça, there are no transitional seasons. We respect the season that we have had. We will evaluate it and make decisions for the future. We have always acted with the utmost respect for Koeman, a legend and a professional who is doing his job.”

While the institutional problems are bound to be solved with the new board, several sporting cracks, including Ronald Koeman’s continuity hang in the balance. Regarding the same, Laporta stated, “We will meet each other next week to analyze the season and make decisions about the future.”

Speaking of club legends and their future at the club, Lionel Messi is yet to make a decision, and officially, has played his last game in the garnet and the blue. However, reports state that the Argentine has been offered a new contract, and the president commented on the same, saying, “We’re progressing in talks to extend Leo Messi’s contract but it’s not done or signed yet. Messi wants Barcelona, he loves the club.”

Barça has also been in the news as the summer transfer window edges near. Several players — mostly free agents —, have been linked to the club, with their signings and announcements imminent: “Next week, we will announce new signings.”

Laporta made sure to not hide behind the results and be clear of his stance regarding the club falling several paces behind its rivals in the domestic campaign, saying, “Losing has consequences and we need to improve the team. What cannot happen is what has happened in these last few years. We have lost and nothing has been changed. With us, losing will have consequences.”

The topic of the conversation soon drifted towards the highly controversial European Super League. Laporta spoke about it saying, “The European Super League was already advanced when we took charge. For Barça, it was important to be involved. Barça will never be left out when it comes to new movements in the world of football.”

That said, he made sure to clarify that the final decision rests in the hands of the members of the club, who will vote on it sooner or later: “After reviewing all the documents, we decided to stay in it but only with the reservation of the approval of the socis.”

He also confirmed that he had been in talks with Spanish FA heads regarding the ESL: “I have a good relationship with Rubialies and Tebas. I spoke with Čeferin not long ago. We welcome a dialogue.”

Probably the biggest problems surrounding the club right now are related to their economic situation. Laporta said, “I cannot be very specific. We are still under audit – which will end in July. On June 20th, we will hold the members’ assembly.”

He did, however, tell about the humongous wage bill, saying, “The wage bill is 110% of the club’s expected income.”

The president addressed the members of the club, sending out a message of hope: “I’d like to tell the socis that I am patient, optimistic and convinced that the next season will be successful.”

The reaction between Koeman and Laporta has always been of mutual respect, and the latter commented on it saying, “I tell Koeman everything that I think and he tells me everything that he thinks – but always with respect. Koeman is a coach that we did not appoint, so we need to have these conversations to make sure that our ideas and goals are aligned.”

Laporta confirmed that Koeman was hospitalised yesterday due to heart-related issues, and said, “Koeman has one more year left on his contract. I want to give him some peace of mind. We will have some conversations and then make a decision.”

When asked if his dream was bringing back Pep Guardiola, Laporta went around the question, answering, “If you want to ask me about Pep, I wish that he wins the Champions League with City on Saturday. I am not here to talk about my dreams. I like to make them come true.”

Similarly, he answered questions about Xavi, saying, “We have the utmost respect for Koeman, who still has a contract at the club. Don’t rule him out. These names that sound good – everyone wants them to come. We don’t want to involve Ronald in more stories.”

Laporta dropped a huge hint, though, saying, “Koeman has the profile we want for our new project. The relationship is nice and healthy.”

Messi leaving is bound to cause a media stir, especially if he makes the decision because of the lack of a sporting project. Laporta confirmed the same, saying, “I am sure Messi deserves more and can make more money than the offer we have presented to him. But I think for Leo, the important thing is the sporting project and not the money. I know that he is excited about our project.”

Rakuten has been Barcelona’s sponsor since 2016, signing a four-year deal with the club, which was renewed for the 2020/21 season. Laporta was asked about a change on the shirt, to which he replied, “We have good offers for sponsorship of the Barça kit. We would like to continue with Rakuten and we are in talks with Mr. Mikitani.”

Several reports have polluted the air regarding the continuity of the Barcelona heavyweights, such as Lionel Messi, Gerard Pique, Jordi Alba, Sergio Busquets, etc. However, Laporta explained that their relationship has been solid: “We will talk and are talking to them – to share that we have been relaxing over the years. The right decisions were not made upstairs.”

Laporta dropped a huge bomb confirming that he had communicated with Koeman that he was not his first choice coach, and will only continue if the board is unable to find a replacement in the next forntight.

Had Barcelona won the league, there seems to be little to no doubt that Koeman would have continued as the head coach. Laporta hinted at the same, saying, “The end of the season has been disastrous and that will make us make decisions.”

Laporta did not try sugar-coating his feelings about Barcelona’s season, saying, “There have been a lot of things that I didn’t like this season, but for example in Paris, we showed that with this team we can do a lot better.”

The former politician has always been upfront, even during the campaigning, and was sure that he was the only one who could make Messi continue at Barcelona. He double-backed that statement, saying, “Messi? You notice that he wants to be comfortable, he has some years left and he wants to enjoy them. What has changed? Well, now I am President and i think Leo likes that.”