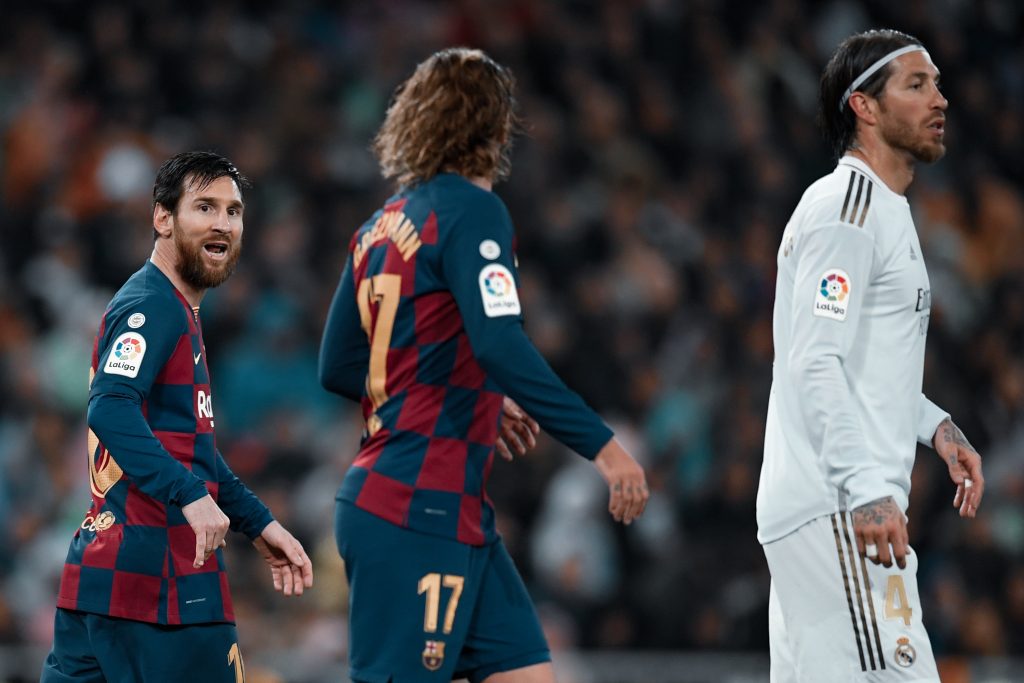 Every year, there’s a debate about the culés’ frontline for the upcoming season. Having bought Trincão this winter and with the Portuguese youngster arriving this summer, Barcelona looks ready offensively and a lot of attacking trios might be used by Setién.

Barcelona have always operated with deadly trios, especially in the 21st century. Legendary players have often become heroes of a front three in La Liga, with forwards such as Samuel Eto’o, Thierry Henry, Luis Suárez, David Villa or Neymar all accompanying Messi in tridents that have marked the blaugranas history. Since Neymar left, the Barcelona higher-ups have tried to bring a suitable replacement every year, in vain. The Catalans’ recent frontlines have been dire and heavily reliant on Leo’s sheer brilliance. Ousmane Dembélé and Philippe Coutinho were the two primary replacements but the former’s injuries and the latter’s sub-par displays last year made Barça look for another young alternative in the name of Francisco Trincão, who will arrive at Camp Nou this summer.

❛ It brings me to tears to see the intensity Démbélé trains with. He’s an extraordinary player ❜

However, Setién’s latest interviews have shown that the Cantabrian manager is set to use Coutinho and Dembélé, labelling the Frenchman as a “new signing” before his injury in February. Recently, Quique declared that Coutinho is still a Barça player and might have meant that the Brazilian would be of use in his squad next year. With Trincão, Dembélé, Messi, Ansu Fati, Braithwaite, Griezmann, Suárez and Coutinho, the culés have the opportunity to rotate more and have a plethora of options in the attack. Let’s list them.

The biggest news next season is that Dembélé seems ready to redeem himself and let his injuries behind him. On his day, the Frenchman is an absolute machine, and many defences fear him. If he finds consistency next season, he could play most of the games alongside Messi and Suárez. The two South Americans are ageing and need rest after an insane number of seasons playing regular football and getting tired by April. However, in big games and should Dembélé stays fit, this is a front three that might be used by Setién. That could mean that Coutinho would be used in attacking midfield or as an impact sub, should one of them tire out. Nonetheless, the Brazilian might be in contention if Dembélé is out of form or injured.

❛ I’m relying on the fact that Coutinho will be here next season. I don’t know what he wants to do. Maybe I should talk to him and convince him to stay. He’s a great player, no doubt ❜

That said, Griezmann has no intentions to leave the Camp Nou, and, despite a questioned first campaign with Barça, he will surely be a starter for the first few games. Whether it is as a striker or a left winger is another case. The former Atlético star is more comfortable playing as a striker but could be of use on the left, where Coutinho and Dembélé would be battling it out for a spot in the first team, which could help Antoine become Suárez’ successor rather than being Neymar’s.

This is for the unusual scenario in which Messi would be rested, or for the longer term. With Dembélé and Coutinho, Griezmann would be able to be a striker, a position he is much more comfortable to play in. It also means that the blaugranas would stop being so reliant on Suárez for goal and Messi could be rested more often for quality players such as Dembélé and Coutinho. This line-up will get used more and more as the two South Americans get older. It might be an XI that stays for a long time, given the three of them begin scoring goals left, right and centre. It could ultimately be an excellent partnership as Dembélé and Griezmann are best friends, and if Coutinho accommodates to his role under Setién, it would be superb. Of course, Ansu and Trincão are also in contention and could be used if the two wide men do not fit in this set-up.

This frontline would prioritise the youngsters on the flanks, and perhaps it would be more suited for lesser games in the league to rotate the squad. Trincão and Ansu Fati deserve playing time, and with Setién in charge, they shall get it. With this front three, the pressing could be more efficient than ever before. With Messi and Suárez both on the pitch, Barça have two fewer assets that can press defenders, and that’s due to their age. With Fati and Trincão on the flanks, Barcelona would have two tireless runners and a breath of fresh air from the wings. The line-up might be used in more accessible games, where the pressure is broadly lower for the two youngsters to develop. With Leo, Luis or Braithwaite to mentor the two of them, it would be a tremendous experience for Trincão and Fati, and, if Dembélé doesn’t grow next season, this XI might be the one to give him his confidence back.

This alternative could have more energy with a mobile and relentless forward such as Griezmann upfront. With Antoine, the pressing would be done by every single player on the pitch, and this would make a great argument for starting the striker in big games alongside the younger players and Messi, of course, as Suárez is beginning to show fatigue and requires a back-up.

This line-up would remind fans of the 2018/19 campaign. With Coutinho in the squad, Dembélé might be used in his more natural right-wing position. Messi would then be deployed as a striker, and Suárez could be given a rest. In case of an injury crisis, Griezmann or Braithwaite would be the striker, and this would be precious game time for them, while Fati and Trincão would chip in the side if Coutinho or Dembélé were out of form or injured.

Dembélé’s versatility is one of his most significant assets, and while he is more comfortable on either wing, he is capable of being a makeshift striker. Ernesto Valverde once used him as a striker in the early rounds of the Copa del Rey, and, while it didn’t work, it’s still an option in the first rounds of the Cup, where senior players are rested. Of course, Coutinho is needed in these moments, and the Brazilian would be a useful asset off the bench if things go south.

All of these frontlines highlight the big squad that Setién will have at his disposal next year. It also means that one player might leave because they won’t be getting as much football as they want. Notwithstanding, Setién has choices to make and is obliged to rotate the squad as much as he can to keep everyone happy, meaning that, come April time, the players will not feel as jaded as they usually are. Furthermore, it makes way for an exciting summer window, in which attack must not be the focus. If Ferran Torres signs for Barça, then two culés will have to make room for him, as there are already too many forwards in the squad. Let alone if Lautaro or Neymar arrived. But in the summer, the focus should now be the defence and not attack.