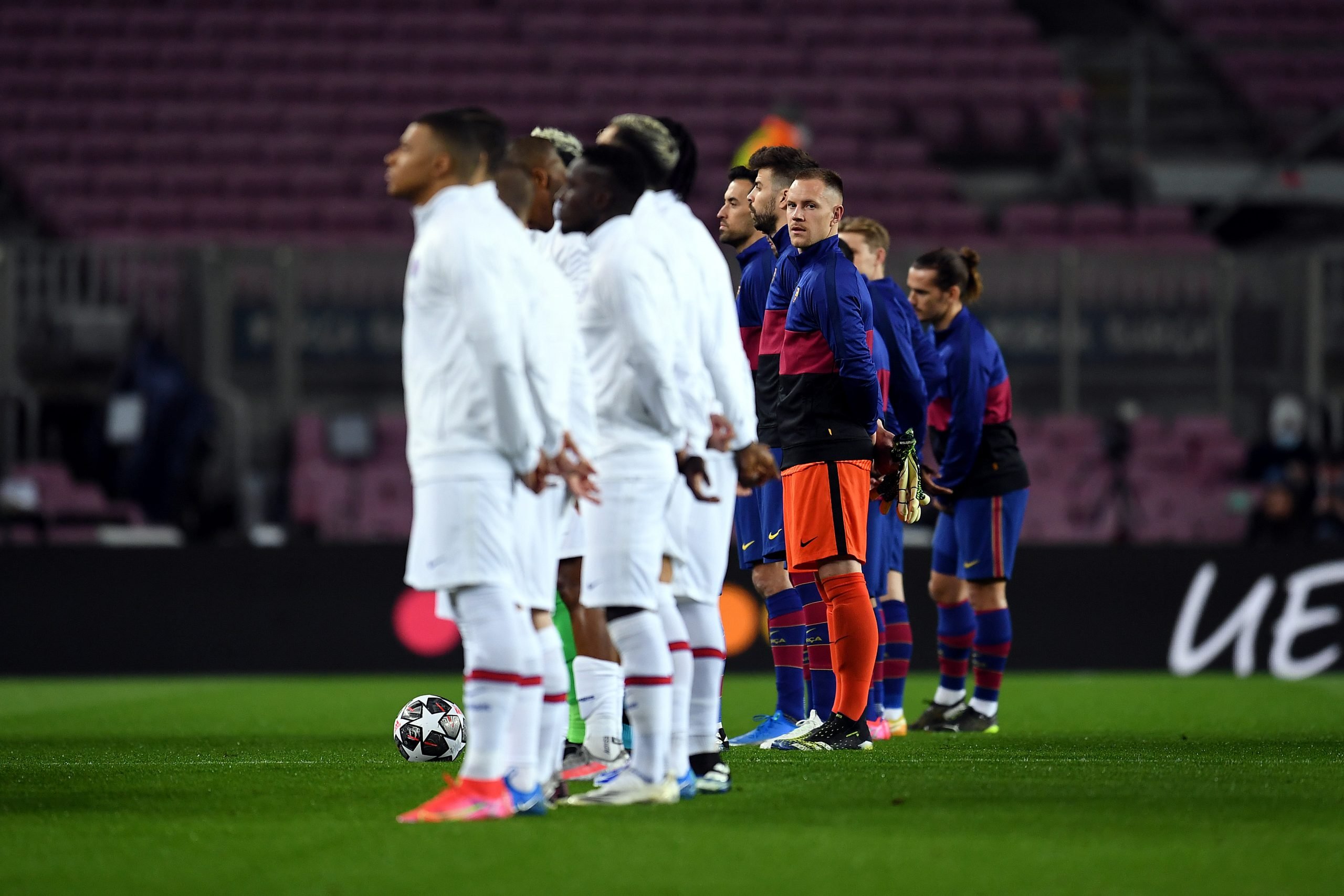 Once again we let ourselves believe and perhaps, deluded by the grandeur of our huge victory over Deportivo Alavés, we marched straight into another trap. The 4-1 loss to Paris Saint-Germain hurts because we saw it coming, it hurts because it happened in the heart of Catalonia and it hurts because the team and the fans deserve better.

But how do you measure such games where we are visibly outclassed? Outgunned in every sense of the word and humbled by the superiority of our opposition? It’s very difficult and not to mention painful to go through the list but ignoring our flaws and weaknesses would just make matters worse.

So here’s how Barcelona players did against Paris Saint-Germain last night and the ratings we believe they deserve for their performances.

6.5 might seem quite high for a man who’s just conceded four goals in a single night. But despite that blatantly horrendous fact, Marc-André ter Stegen was still among the best performers last evening. Saying the team would’ve conceded more without him is kind of obvious but he really did pull off some incredible saves throughout the game.

His distribution was good, as it usually is, and despite some shaky clearances, there’s not much more the German could’ve done to prevent this disaster from happening.

In hindsight, starting Clément Lenglet next to Gerard Piqué might not have been the greatest of ideas against this Paris Saint-Germain side. Or any side with pace for that matter. But Lenglet was struggling last night and visibly couldn’t keep up with the opposition. Of course, that much is true for the majority of the Barcelona team but the Frenchman’s performance was well below par.

Much more is needed if he’s to be a starter at this club, a notion that may be slipping away from him with every passing second.

Alongside Ter Stegen in goal and Lionel Messi up front, Piqué was probably Barcelona’s best player on the pitch. Of course, the stats may not show this in full and looking at the result, it seems impossible that any of Barcelona’s defenders were actually on the pitch.

But Piqué was the one screaming, organising the troops, leading the distribution with a 100% passing accuracy and four accurate long balls, and all of that fresh from an incredibly serious injury. He couldn’t turn the tides in the end but it wasn’t for the lack of trying.

Jordi Alba has good and bad days. At his very best, the pacey full-back is one of the most important pieces in Barcelona’s attack. But even then, his defensive contribution is suspect. Yesterday, he couldn’t do anything going forward and was still struggling the other way.

As a result, you get a performance that’s neither catastrophic considering the circumstances but also not satisfactory at all.

Similarly to his teammate on the other side, Sergiño Dest didn’t have the best of games but also wasn’t the main culprit for the defeat. The young American is still fresh from his injury and he felt rather constrained against PSG, as if someone had put the breaks on his mazy runs and aggressive mentality.

Of course, the Parisiens did all they could to pin him back constantly, making him focus on defending more so than attacking. It didn’t help that he got zero support from his winger ahead of him, which often lead to being isolated, outnumbered and overwhelmed by the opposition.

Watching Sergio Busquets struggle to keep up with the young and energetic players on the other side was exactly how Barcelona as a team must feel. The future is running away from them and once again we were reminded Busi‘s best years are long behind him.

It pains us to say it but his time at the highest of levels may be over.

Just as most of his other teammates, Frenkie de Jong couldn’t do much to change Barcelona’s fate. But he still kept running, kept working hard and making those forward runs we know and love. After all, it was one of those attempts that gifted Barcelona the penalty that was ultimately converted by Leo.

The young Dutchman can do much more but it’s difficult to perform in a highly dysfunctional team such as this one.

Unfortunately, giving Pedri a 6 is the best we could do. With only 39 touches registered on the night, the youngster was hardly involved in Barcelona’s attacks last evening. But it has to be said that him receiving the ball between the lines and then swiftly turning to progress towards the final third was when Barcelona felt alive.

Even when he’s not as influential as he can surely be, Pedri still finds ways to show us glimpses of his brilliance. Yesterday, unfortunately, we got nothing more than just glimpses.

In reality, Ousmane Dembélé may not even deserve a 6. The Frenchman was a huge liability in defence and the lacking work rate was one of the reasons why the right side of the pitch was constantly overwhelmed. Pair that up with incredible misses in attack and you get a rather disappointing display.

However, Dembélé was still one of the very few outlets Barcelona had to endanger the opposition. Ultimately, he wasn’t successful in most of his attempts but it’s difficult to imagine many doing a lot better on the night.

It was a truly bad night for all the Frenchmen in Barcelona’s team, Antoine Griezmann included. The only thing saving his rating is the very opposite of Dembélé – his work rate. While his teammate on the other flank was slacking off, Griezmann was rushing back, clearing the ball and trying his best to salvage what can be salvaged.

But, it has to be said, his performance going forward was lacking once more. Griezou missed one big chance and registered just two shots and 38 touches on the night. Again, that’s just not good enough.

Yesterday, as it’s often the case, Messi was among the best performers in Barcelona’s squad. But that, sadly, doesn’t say much of his overall display. In the first half, the Argentine was heavily influential, offering verticality, progression and penetration.

However, as the game slowly slipped through their fingers, Leo’s influence started to fade. By the end of it, he could hardly touch the ball without dropping all the way into the backline.

For all his ingenuity, there was not much he could do to change that.