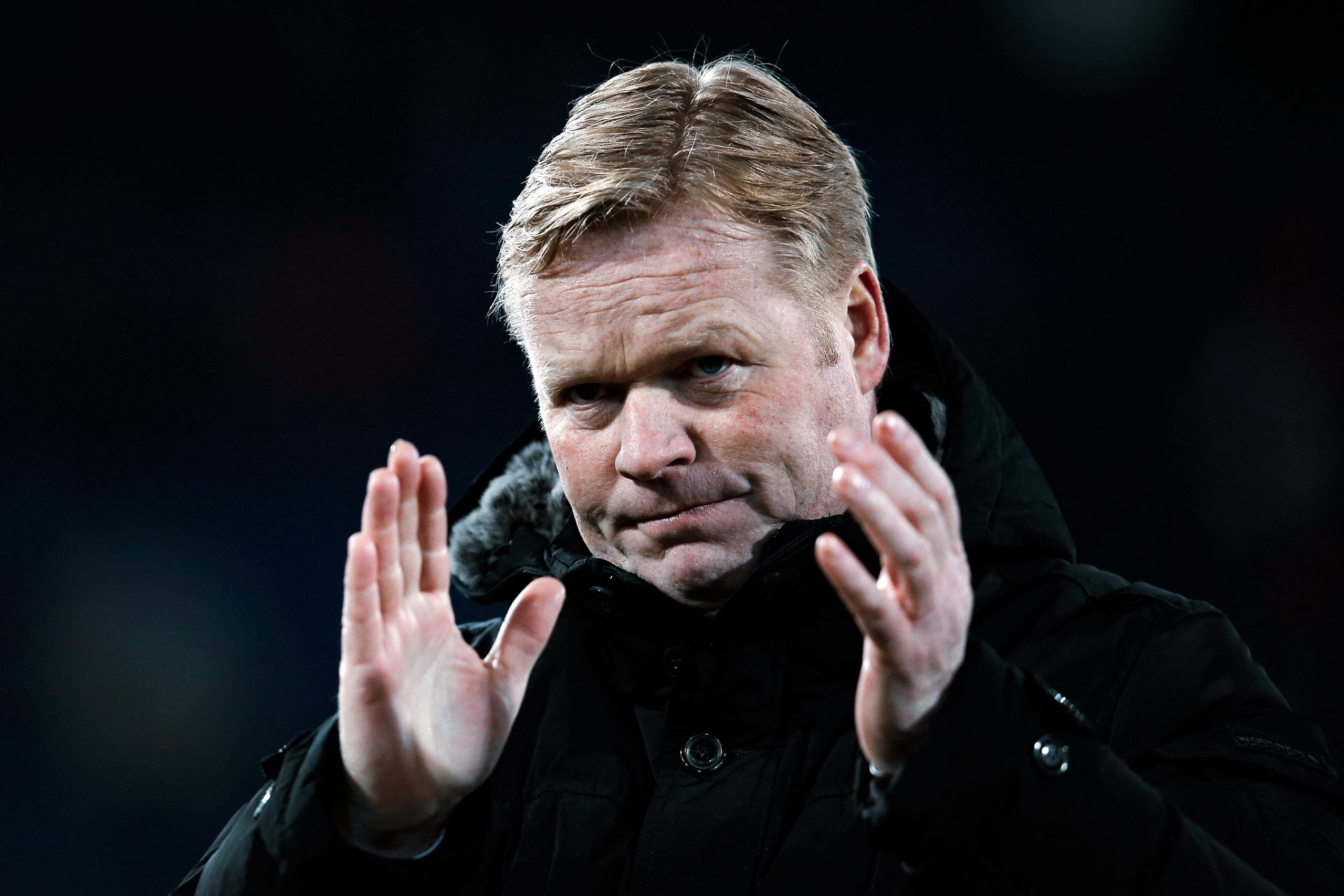 Ronald Koeman’s Barcelona have been a huge disappointment, but the positive signs have slowly started to show themselves. Should Barcelona continue with Koeman in the near future?

Barcelona are currently undergoing one of the most critical stages in the club’s history. After a decade endowed with the greatest honours in world football, the team is now well into the dreaded transition phase that could make or break the next few seasons. The appointment of an inexperienced manager in Ronald Koeman as the manager was always going to be a risky one in this period for Barcelona.

After months of inconsistent performances, Barça are practically out of contention for the league, and the situation does not look any better in the UEFA Champions League. As a result, fans are already calling for Koeman’s head, with a wide range of people believing that he is not the right man to lead the team. However, sacking the Dutchman might not be the best option for the club.

Rebuilding a club after a golden period is an unimaginably difficult task. If done improperly, the consequences can be dire. A person does not need to look too deep into the history books before one comes across the trail of failed transitions and the years of poor results that followed.

From the all-conquering AC Milan of the late 1990s and early 2000s to the unbeatable Manchester United under Sir Alex Ferguson, several once-great teams fell into the grips of mismanagement. The errors of their respective directors and presidents led the clubs into years of struggles. While this looks like the fate the Blaugranas are headed towards, it might not be too late to make it out with minor injuries.

Barcelona’s next generation is in crisis

Much like the aforementioned examples, Barcelona too, have been the victim of horrible leadership. Just as their time at the top was coming to an end, Josep Maria Bartomeu was chosen as the club president. What followed was years of scandals, controversies and questionable decisions.

As legends like Xavi and Andres Iniesta departed, the holes they left in the team were filled with poorly-researched big-money signings that did not fit the system. It was always going to be difficult to replace players of their quality, but the replacements caused more problems than they solved.

Their particular set of qualities did not benefit the system directly. Despite the efforts of three different managers, the three transfers have not worked out. Philippe Coutinho and Antoine Griezmann continue to underperform while Ousmane Dembele’s injury woes are yet to subside.

More often than not, the team are still heavily reliant on the talent of Lionel Messi. But even the incredible Argentine has his limits. His steady decline due to age has started to set in and the days in a Barça shirt are running out. Even though a direct replacement can never be found for Leo, his void can be somewhat filled if the entire team elevates their performance level.

At this juncture, the management is faced with a compelling dilemma. The said dilemma is led by the obvious — a coach who can spearhead the team effectively is essential for the next few years.

On one side is current manager Ronald Koeman. Barcelona under him have looked underwhelming, and to a large extent, have flattered to deceive. ‘One step forward, two steps back’ is a household phrase when describing his tenure.

Despite a decent start to the campaign, it did not take too long for results to go downhill. It is not often that Barcelona are practically out of the title race by January; however, Culés all over the world have had to face this nightmarish reality.

With public opinion against him, it seems inevitable that he will soon face the axe. Presidential candidates like Victor Font have already expressed their desire to see Xavi at the helm.

Fortunately for him, as the days pass, it seems that the ex-Barcelona player has finally found a steady system. Intense pressure after poor results forced Koeman to shift to a more traditional 4-3-3. With this new formation, rather than his preferred 4-2-3-1, the team is slowly growing.

The likes of Lionel Messi, Antoine Griezmann, and Frenkie de Jong are starting to catch form, and even Ousmane Dembele is looking fitter, sharper and more mature as the season progresses.

Two sides to the poor start

Ronald Koeman has several quirks that make him a risky option for leading the club ahead. There are times when his decisions can be questionable, to say the least. His so-called grudge against Riqui Puig has enraged fans all over the world. Whatever happens on the pitch, something prevents him from relying on the La Masia product, who has been excellent when called upon.

Then comes his naivete when facing adversity. On occasion, the Dutchman has harmed the stability of the playing eleven in desperate attempts to salvage games. Additionally, the horrible position the squad finds themselves in may appear to be the last straw.

Unlikely as it may be, writing off the European Cup winner could be the wrong thing to do. For all of his mistakes, Koeman has also done a few things right. His disliking towards Riqui Puig is astounding, but he has given chances to several other young players. Pedri, Oscar Mingueza, and Ronald Araujo are players who Koeman gave opportunities to. And likewise, they repaid his faith by putting in solid performances.

He has also been bold all season. With the respect that he has earned as a player, he hasn’t been afraid of dropping the underperforming heavyweights. His management of Lionel Messi has been almost perfect, and he has shown that he is ready to change his system if required.

Another positive is the added work rate and fitness. Koeman has increased the team’s overall fitness and strength by taking extra sessions and rewarding players for their hard work. While games do still tend to be sluggish, there has been an improvement in the intensity of pressing, which is essential to Barcelona’s style of play. He has also rotated the team, ensuring that everyone can always perform at a high level.

Does Koeman warrant more time at the helm?

Ronald Koeman’s reign has brought a mixed bag of positives and negatives. While the Blaugranas have dropped several points, their away form has drastically improved. He is the first manager since Tito Villanova to win eight of the first twelve away games.

At the same time, Barça’s chance creation has also seen a hike. The Azulgranas have been one of the best in opening up defences statistically. In fact, Barcelona have the highest number of shots on target, with seven per game, across Europe’s top five leagues. However, a combination of good goalkeeping and lack of clinical finishing has resulted in fewer goals.

Barcelona have averaged more shots on target per match (7) than any other team in Europe's top five leagues this season. Last campaign they ranked 13th in the same stat (5.9).

Not just that, but Koeman has also had to deal with several injuries throughout the squad. From the incredible Ansu Fati to the ever-present Gerard Pique, the Dutchman has had to cope with several long term absences. Especially in defence, the former centre-back has had to make numerous enforced changes, with a lack of stability leading to costly errors at the back.

And finally, Koeman hasn’t even had the chance to sign additional players to help implement his ideas. The lack of a true poacher has affected the team. With Martin Braithwaite as the only out-and-out number 9 in the team, no one has matched Luis Suarez’s output last season.

All in all, Koeman has faced a turbulent time as manager of FC Barcelona. From unexpected injuries to financial setbacks due to the pandemic, he has had limited tools to make his ideas work. But his own inability to react swiftly to the imbalance has left the team in a difficult spot.

The upcoming weeks will be critical, and his response to the pressure will ultimately decide his fate. Although there are positive signs in recent victories, Barcelona need a long streak of wins to show that they are back at the top of their game.

Winning the Supercopa de Espana this week will be an important stepping stone in the process, no less beating the likes of Real Sociedad, Athletic Bilbao or Real Madrid in the process. It will serve as a confidence booster going into the game against Paris Saint-Germain. One cannot expect Barça to win the UCL, but going past PSG to reach the Quarter-Finals will be a statement-making opportunity.

Giving the youngsters a chance will show a glimpse of what can be expected from the future. As signings arrive, the team will slowly begin a new era with a completely different generation of players. However, patience is key in this process. Like Liverpool have shown, it took Jurgen Klopp several years to bring Liverpool back to the top level of football.

Granted, Barcelona have a much better squad than what the German started with, but learning from other such clubs is essential. Along with patience, though, a clear project with a stable staff is also important. Whether Ronald Koeman is the right man to fulfil that role, only time will tell.

Despite the lack of time in the club’s hands, Ronald Koeman’s past few games have been encouraging. An entire season in-charge will help the new president get a better picture of his abilities. He does deserve credit for what he has done. Taking hold of a team that had been battered 8-2 by Bayern Munich was never going to be easy. The mental blow suffered by the players was extreme.

All the Dutchman needs to do is move past controversial feuds against certain players and focus on the football. Maybe with the in-form and clinical Lionel Messi, Antoine Griezmann and Ousmane Dembele at his disposal, he will finally be able to turn a new page in his Barcelona chapter.