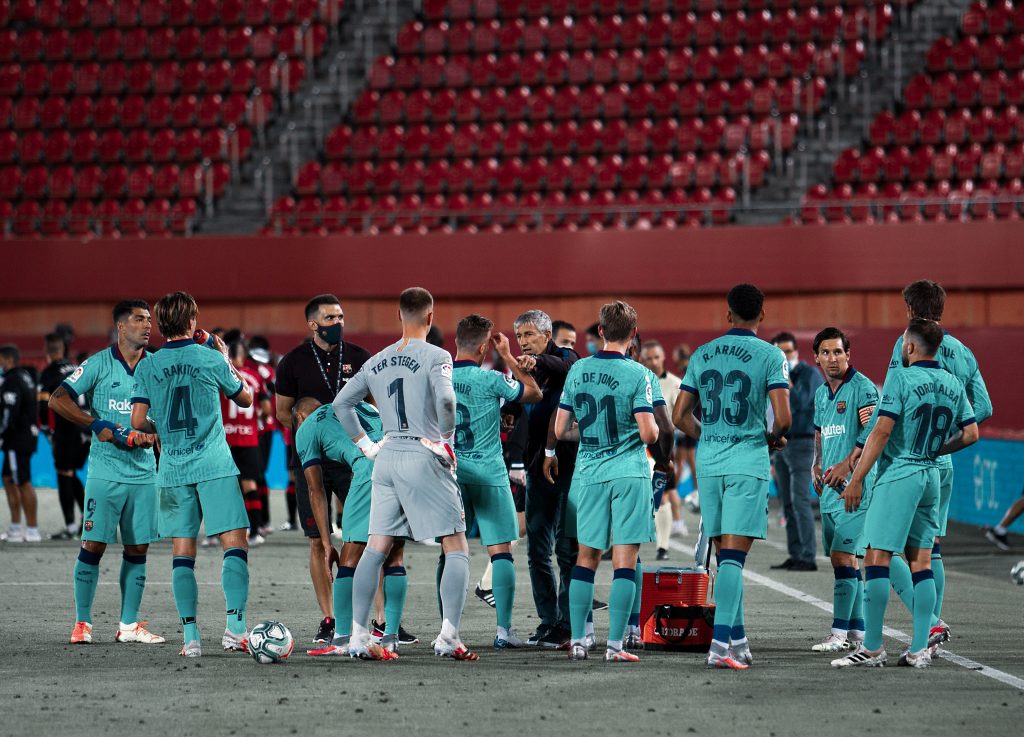 On 13th June, Barcelona faced RCD Mallorca at Son Moix. After 98 days, football had returned. Nobody was sure of what to expect from either team after such a long time. Ernesto Valverde’s Barcelona had won 5–2 against Vicente Moreno’s Mallorca earlier in the season. Due to excellent tactics, great match-fitness and above all, much superior talent, Barcelona won by 4–0 this time to maintain their position as the La Liga leaders as a very dense schedule begins. Mallorca now have their task of getting out of the relegation zone, made even tougher with this defeat.

Barcelona started out in Quique Setién’s preferred formation in a 4–3–3. Lionel Messi started out on the right with Antoine Griezmann through the middle and Danish forward Martin Braithwaite on the left. With the midfield of Frenkie de Jong and Arturo Vidal with Sergio Busquets as a pivot, Arthur Melo was not in the starting line-up and even Croatian Iván Rakitić was on the bench. In defence, Barcelona B youngster Ronald Araújo made his first start for the Catalans alongside Gerard Piqué. The chosen full-backs were Jordi Alba and Sergi Roberto.

Meanwhile, the hosts started in a 4–4–2 with full-backs Joan Sastre and Alejandro Pozo forming the defence with Martin Valjent and Antonio Raíllo in front of Manolo Reina, the keeper as well as the captain. Dani Rodríguez and ex-La Masía talent Takefusa Kubo were the wide midfielders with veteran Salva Sevilla and Marc Pedraza in midfield. The front two were Cucho Hernández and Ante Budimir.

Barcelona was by far the more proactive team in terms of attacking output. For the planned system to work, the full-backs were given a lot of responsibility. Jordi Alba and Sergi Roberto were expected to overlap at every possible chance. For this to work out smoothly, Messi, Vidal and Roberto on the right, and Braithwaite, De Jong and Alba on the left, used numerical superiority to carry about witches. The wingers dropping back was the trigger for the full-backs to go all-out in the attack.

This helped the system as Messi or Braithwaite would pass the ball from between the opposition’s full-back and center-back into the path of the Barcelona full-backs. They would then be able to cross the ball into the box. By then Vidal and De Jong had both advanced into or near the edge of the box. Thanks to this Frenkie played a major part in the second goal with his header. He played a part in the first goal as well by dispossessing Take Kubo near the box. Vidal himself got an assist as well.

A problem this caused was that Braithwaite’s passing ability is not as potent as Leo Messi’s, which meant Jordi Alba would often receive the ball in front of the full-back rather than behind. When he did get the ball behind the lines, it was due to Messi’s perfect lobs and chips. During these attacking sequences Antoine Griezmann kept dropping back and roaming between the lines.

This forced his marker, usually one of the central midfielders to follow him which helped the wingers who dropped back to get relatively more space. Had the marker instead closed in on Messi and Braithwaite, Barcelona could easily create with De Jong and Vidal having the other winger and Griezmann to feed the balls through to.

In the build-up, Marc-André ter Stegen played an important part. He was superb throughout the match. Often, the centre-backs would drift apart and the goalkeeper would almost be in line with them. This took advantage of Mallorca not pressing Barcelona much near the Catalans’ box. Because of this, Barça were able to find passes through to the full-backs and, if not, to Sergio Busquets. In fact, Ter Stegen got 64 passes with a 94% conversion rate, which is the most number of passes by a goalkeeper in La Liga since the 2005/06 season.

Admittedly, Mallorca’s attack was not impressive. They lacked the directness needed, they were unable to maintain possession in Barcelona’s intense pressing, which was one of the reasons Barça had 65% possession. Croatian Mallorca striker Ante Budimir would drop back to make it a 4–4–1–1 with the wide midfielders coming forward.

Takefusa Kubo was the most impressive man in attack for Mallorca. His dribbling and agility caught the Barcelona players out of possession a few times. However, Ronald Araújo was excellent in defence, which resulted in Kubo having zero successful crosses in six attempts. He however got three shots on target, which isn’s too outstanding but we must also consider of the fact Mallorca had a cumulative of three shots on target.

The hosts started attacks from out wide. This was sometimes intentional but sometimes due to Griezmann’s relentless pressing down the middle as well. Nevertheless, the attacks shifted out wide as thy moved further up the pitch. Salva Sevilla and Marc Pedraza had the task of feeding the balls to Kubo and Dani Rodríguez on the wings who would then combine with Budimir and Cucho Hernández. But Barcelona’s ability was clearly superior and hence their pressing often caught Mallorca in possession. Hence, they barely had any productive attacks.

Barcelona’s defence was very solid with Gerard Piqué, Ronald Araújo and Sergio Busquets staying back. The Spanish defensive midfielder actually stopped a few key attacks with excellent tackling in the first half. Araújo did a great job in containing Kubo to an extent. Whenever the winger tried to get space out wide, the Uruguayan would immediately press him. By then the full-backs and midfielders would arrive and form a compact defensive unit.

Araújo was very impressive with four clearances, three aerial duels won and hit the woodwork once as well. Gerard Piqué was defensively strong as well. He was instrumental in moving the ball up the field. Both the central defenders contributed greatly to the build-up.

A very important yet indirect part of their defense was pinning back the wingers to avoid quick counters. Jordi Alba and Sergi Roberto moving forward would result in Take Kubo and Dani Rodríguez tracking back to press them. This ensured that there were a minimal number of long balls into the Mallorca attackers’ paths as well. Kubo’s directness and pace was the only way Mallorca could get out of this dilemma, with Dani being unable to get past Roberto before the Catalan midfield reinforcements acted.

In defence, Mallorca relied on their midfielders pressing onto Barcelona’s attackers. Even so, Frenkie de Jong and Arturo Vidal kept moving in between the lines making it harder for the opposition to mark them. Antoine Griezmann’s constant roaming also dragged the central midfielders out of position.

One problem which Mallorca faced very often was the defenders were very poor at pressing. The first goal could have been prevented had De Jong been immediately pressed and similarly the second had he been pressed faster. This confusion may be due to a lack of match-sharpness, but it may even be because of the distracting runs by Griezmann. As mentioned earlier, the midfielders also joined the attack actively, which gave Barcelona more passing options and, after that, all they had to do was pass faster than Mallorca’s pressing.

Barcelona were a very cohesive unit at Son Moix, always one step ahead of the locals. It was a great display by the Catalans. The long hiatus from football did not seem to have caused a detriment in quality for Barcelona. Mallorca, though, have had a rough start with this loss. Barcelona now focus their attention on CD Leganés whereas Mallorca face Villarreal next. The tactics were very well-thought and those combined with the incredible individual talent that they possess, Quique Setién’s side deservedly won the tie.

• 5 takeaways from the Mallorca 0–4 Barcelona