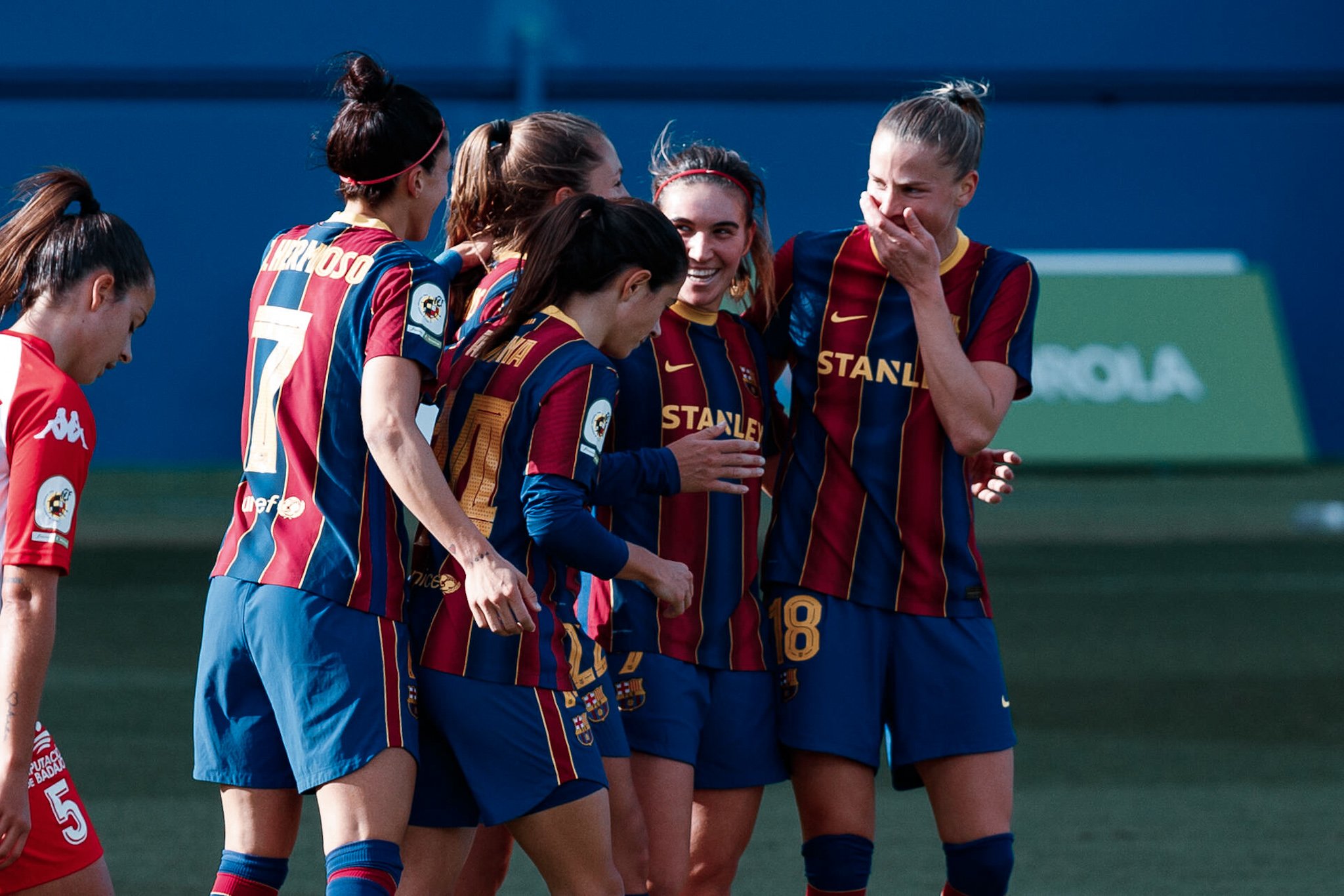 Following a two week international break that saw Barcelona well represented by their players’ respective national teams, it was time to get back to business as Barça entertained Santa Teresa in the Estadi Johan Cruyff. The Catalans were third, two points behind former champions Atletico, though with two games in hand. Just before the break, they made a mockery out of Real Sociedad in a largely one-sided affair and today, against this newly promoted side, things were surely bound to get interesting.

The South Westerners come into this match on the back of a rather deplorable run of form. With just but a victory in their last five outings, and that too against the minnows of Espanyol, questions were raised on their survivability in the division. Then tenth, and with just ten points from a possible 24, and faced the gruelling task of taming the most dominant Barça side in recent history.

The defending champions were in the ascendancy almost immediately the first whistle was blown. Following a sumptuous cross from Aitana Bonmati, chief markswoman Jenni Hermoso scored a tap in from point-blank range.

In another chance just moments later, Lieke Martens, deputising for Caroline Graham Hansen in the right-wing, forced a save out of Raquel Poza. They failed to score the subsequent corner, however, what followed was, to put it lightly, a work of art. Such was the passing from the ladies in Claret and Blue that the opposition was left chasing their shadows. By the time they had the ball in their sights, it was at the feet of Ana Crnogorćević, who instinctively played a low cross into the penalty box for Lieke Martens to score via a tap in.

On a quick break having won the ball, Mariona Caldentey played a long ball into Martens on the edge of the box. She delicately controlled the ball with one foot and given how technically astute she is, she hammered the ball into the net with the other to seal hee brace. Three was four just a few moments later, and it was the Dutch number 22 once again. From the right flank, her attempted cross into the box for Aitana to head in had a sudden and wicked curve, and Poza, caught completely unawares, conceded her fourth of the game within just 20 minutes of the first going.

Lieke Martens’ genius was on display yet again. (Photo via Imago)

The team spirit was brimming, and this reflected in their possession, as the hosts held 89% of the ball in comparison to their visitors’ eleven. Four quickly turned into five in the 28th minute following another remarkable team goal culminating in Mariona setting up Jenni for her second and Barça’s fifth of the afternoon.

The Spaniard got her name on the scoresheet again with a stupendous strike on the edge of the box, over the goalkeeper and into the net to seal the game’s second hat trick. This goal marked not only Barça’s 30th goal of the season but also took the Pichichi winner to the top of Barça Femení’s all-time goalscoring charts.

She marked the occasion with yet another strike to seal a first-half poker. Following a cross from Melanie Serrano, Jenni had the simple task of tapping the ball into the back of the net to take the lead to SEVEN! Having already provided an assist, Mariona scored one of her own on the back of a cross from Aitana Bonmati, right through the keeper’s legs.

The visitors were disgruntled by the abject humiliation they found themselves in. Poza bowed her head in anguish as she had to pick the ball out of her net for the eighth time in the space of 45 minutes. So dominant were the Blaugrana that they ended the first half on 90% possession, with eleven shots on target from 14 shots, with not a single one on their end; not to mention the eight goals.

With the game done and dusted, there was little need to search for more goals. Manager Lluis Cortes made straight swaps, bringing in Alexia Putellas, arguably Europe’s best midfielder, alongside Nigerian Striker Asisat Oshoala. Attack they wanted, and attack they did, however this time the goalkeeper was perfectly poised to halt their attacks.

Caldentey only scored one, but ran the show for Barcelona today. (Photo via Imago)

From Aitana to Jenni to prevent a ‘Manita’, Poza seemed like a completely new footballer in the second half. Even Vicky Losada’s thunderbolt on the half volley from the edge of the box hardly caused her any trouble. Frustration began to build up and in spite of having just the right keys to success, these symbolised by their patient build-ups from deep, they abandoned all tactics and resorted to taking shots from outside the box.

For the imprecision Barca showed, Santa Teresa nearly got their consolation goal, though, to their dismay, it was rightly rescinded due to an offside in the build-up.

The ninth did come, and it was substitute Andrea Falcón who set it up. From the left flank, she whipped a cross into the box and on the third time of asking, Oshoala finally hit the back of the net.

The win was enough to send Barca top of the table as even an Atlético win, they hold the head to head advantage as well as more than twice the goal difference. As for Santa Teresa, it is back to the drawing board as they face Granadilla Tenerife next weekend.