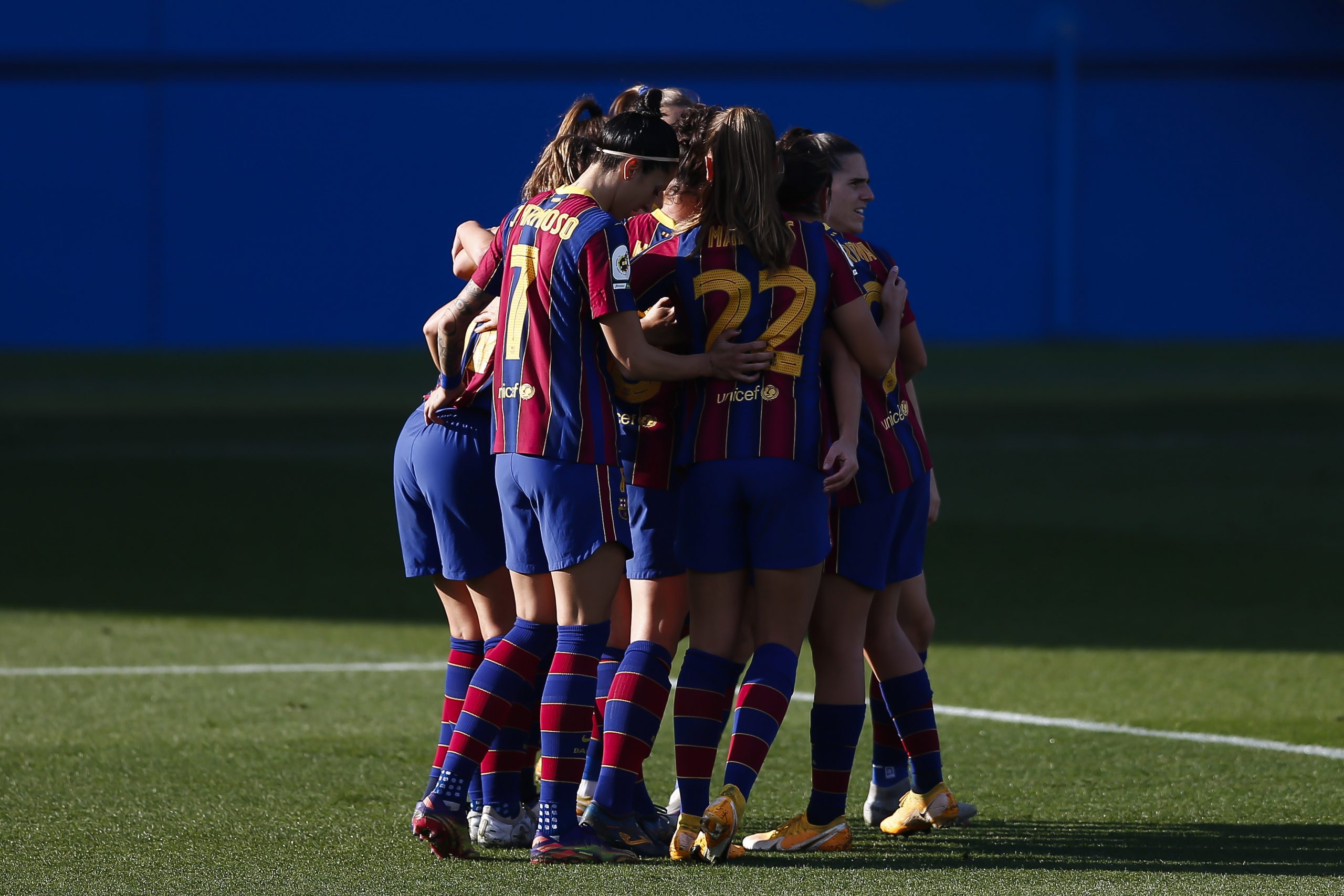 Another day, another avoidable loss for a team that’s supposed to be one of the best in the world.

FCB Femení lost on penalties to Atlético Madrid in the Supercopa Femenina semifinal yesterday, their first competitive loss against their Rojiblanco rivals in nearly two years. On the surface, this match means little in the greater context of Barcelona’s season. So far, they have won every match in the Spanish league by scoring 62 goals and conceding just two in 11 matches.

They likely will have an easy Round of 16 Champions League draw, and are still probable to complete a domestic treble for the 2019-20 season, pending the Final of last season’s Copa de la Reina. With all this in mind, this Supercopa loss should be just a blip in what is supposed to be a very exciting 2021, but the outcome of this match is representative of some much more pressing issues within the club that have gone on for far longer than necessary.

So, all these glaring issues that came to light against the Germans… were they ever resolved?

Did they address their vulnerability in defense? Did they ever find a pure striker who could consistently score goals without having to be handed 20 opportunities? Have their managerial decisions gotten any better? Has their big-game mentality improved any since then? Has the club brought in any significant reinforcements in their problem areas? Has FCB Femení done anything meaningful to remedy the many mistakes that they made against Wolfsburg?

After having two transfer windows and almost six months to fix their issues, the answer for all of those questions remains a flat no. Specifically, Barcelona’s forwards have not addressed their inability to convert, the backline have not addressed their defensive shortcomings, and the coaching staff’s managerial decisions have not gotten any better. As a collective, they have not improved their mentality in big games and they have not improved their squad since the Champions League semifinal.

Barcelona may have only conceded 2 goals in the league and they may regularly win their league matches by 5 or more goals, but that speaks more to an ever-increasing disparity in the quality of Primera Iberdrola teams than it does to the overall quality of Barcelona. The defensive issues are still there- they’re just less evident when Barcelona is in the opposition’s half 90% of the time. The inability to convert is still there- it’s just less evident if the opposition’s backline is discouraged from the starting whistle when it’s almost a guarantee that they’ll be letting in 5+ goals. Recording dominant wins like these every matchweek makes it easy to ignore the problems that still exist within the team, which could very well lead to complacency farther down the line.

These problems need to be acknowledged and addressed if they have any chance of winning it all in Europe. This starts with their key issues on the pitch. Barcelona have no reliable, consistent strikers. Jenni Hermoso might be Barcelona’s all-time top scorer, but she is not a pure 9, she is too slow to play as a 9, and she should not be in Barcelona’s long-term plans considering her age. Barcelona’s other option at striker, Asisat Oshoala, is also less than ideal. Her resolve in front of goal has taken a downturn since returning from the pandemic hiatus, and she has shown herself time and time again since then to be ineffective under pressure. Her shooting against Atléti in last year’s Champions League was poor, her shooting against Wolfsburg in the Champion’s League was a disaster, and aside from one or two moments of quality inside the box against Atléti in the Supercopa yesterday, her performance was nothing to write home about. This also includes her poor performances in the league that often go under the radar because she ends up on the scoresheet anyway. Her signing in 2019 seemed extremely promising, but this summer should be time for her to hang up her boots in Barcelona so the club can make room for a proven, world-class striker, whomever that may be.

Barcelona’s other biggest area of weakness can be found in left-back Leila Ouahabi. Leila offers little to the team in terms of providing width, giving defensive stability, creating chances, or really any other quality that a fullback might want to have. Her positioning is often so poor that Mapi León spends a significant part of any given match covering for her, to the point where she regularly plays as both a left-back and a center-back at the same time. Too many times has this thrown off Barcelona’s formation and made the team lose its balance, causing them to suffer from avoidable counter-attacks through the left-wing and the centre. Cortés either needs to shift his focus towards Melanie, who is a significant improvement in almost every area except pace or go shopping for a world-class left-back. The club outgrew Leila’s level a long time ago, and they simply do not have time to waste being held back by players who are not at the level that they need to be.

Speaking of Cortés, he has yet again demonstrated himself to be a weak coach in big matches, something culés have seen on more than a handful of occasions now. This time around, he fielded an extremely predictable starting XI- no formation changes, no surprises. When he does this, he gives his opponents an opportunity to learn from their mistakes. On the other hand, he seems content and even adamant in repeating his mistakes, and then doing nothing to fix them. He also seems apprehensive to own up to his shortcomings as a coach. Poor substitution choices, inadequate reading of the team’s needs and extreme predictability are all things he does that lower the level of Barcelona when it counts the most. As time has passed, Lluís has shown himself to be a more and more limited coach. If this trend continues, Barcelona will have to search elsewhere for a manager who can rise to the occasion, especially given the level of talent at their disposal.

Finally, it goes without saying that the refereeing in the women’s game is a disaster. VAR in major competitions should be one of the top priorities of women’s football, because the two penalties not called in Barcelona’s favor could have easily had a significant impact on the outcome of this match. Alexia practically being tackled in the box by Silvia Meseguer and a handball from Merel van Dongen were not called, despite the fact that van Dongen clearly extended her arm to prevent a cross into the area. Meanwhile, on the other side of the pitch, a handball was called against Andrea Pereira which gave Atléti the upper hand and nearly sent them through to the semifinals in regular time. Decisions like this are immensely frustrating, but at this point, poor refereeing is not a valid excuse when it’s pretty much a staple of Spanish football. The players should know by now that they need to expect major refereeing mistakes in big games. What really prevented them from winning was their shooting, which, similar to the Wolfsburg match, was absolutely unacceptable. Barcelona recorded 31 shots with 17 on target and had 5.4 expected goals but shockingly scored zero goals from open play. Atleti’s keeper Hedvig Lindahl is one of the greatest keepers to ever do it, but she has not played a match since August of last year. Their only goal came through a miracle free kick from Alexia Putellas, who yet again had to save Barcelona from crumbling.

The possible penalty on Alexia Putellas by Silvia Meseguer

It’s difficult to look at this match and not feel discouraged by a loss like this that was completely preventable. It felt exactly the way Wolfsburg did- all the team’s issues came to the forefront at the worst possible time, causing them to crash out of a tournament once again.

The club simply cannot afford to overlook this loss. The Supercopa is a relatively meaningless trophy, but it’s extremely telling that the first time Barcelona was legitimately challenged in a win-or-go-home match this season, they failed to put up any sort of fight. Until these problems are fixed to the point of near perfection, they are not serious about European success. It is not possible to put up a challenge to Lyon with so many glaring weaknesses in a team, let alone the likes of PSG, Chelsea, or Bayern.

Atléti let them off with a warning. The next time they face a bigger and better team, it will be a test whether or not they’re truly prepared to join the ranks of Europe’s top clubs, or whether they’ll continue to settle for being second, third, or fourth-best.