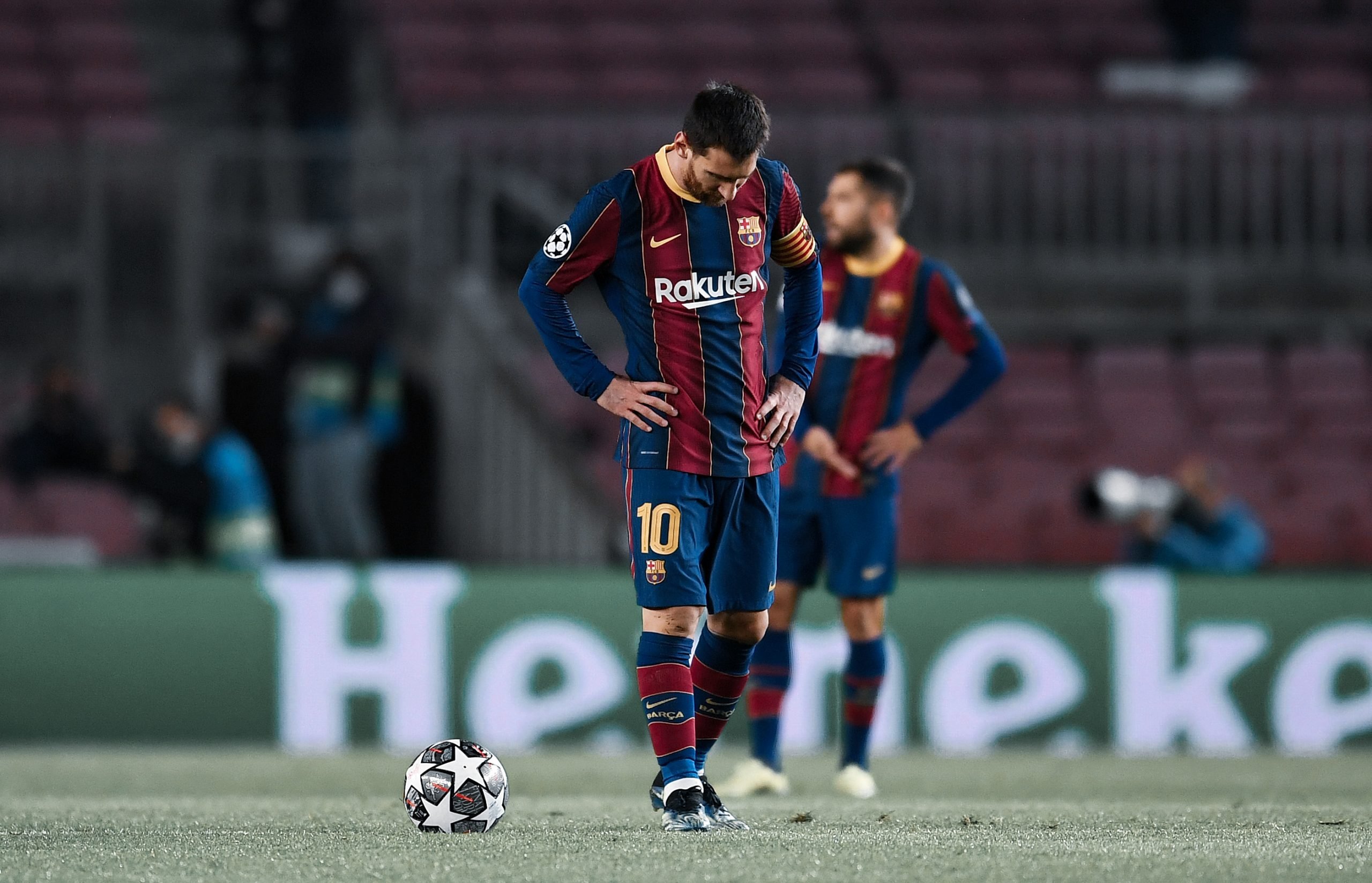 After a demoralizing loss against Paris Saint-Germain, FC Barcelona have now lost two Champions League home games in a row for the first time in history. But this is just another storyline in a much larger issue.

Expectations were low from the FC Barcelona this season and Paris Saint-Germain were always going to be a formidable team to play against. Many Culés had come to peace with the possibility that the Blaugrana were not going to win the tie. But one thing everyone wanted was that the team would give it their all.

After a run of good performances, there was hope that Barcelona could scrape a win at the Camp Nou. However, this false hope was torn to shreds by the horrid reality. Barcelona were hammered 1-4 by PSG. But the truly nightmarish truth was that when the team suffocated when faced with a big challenge, it surprised no one. In fact, it followed a new pattern developed by Ronald Koeman’s Barça.

The team would show positive signs against relatively easier opponents, and just when fans got their hopes up, they would crumble.

From Real Madrid in the league to Athletic Bilbao in the Supercopa de Espana Final, the Azulgranas have struggled in the most crucial games. If that wasn’t embarrassing enough, the nature of the losses was the final blow. It is clear that this team chokes in big games.

While performances are positive in La Liga games, these are only a by-product of the difference in the quality of the teams that Barça face.

For example, let us consider the PSG match. The French outfit were without important players like Neymar Jr. and Angel Di Maria. They too were struggling domestically and were nowhere near at their best. Just like other teams in La Liga, they easily created several chances against Barça. But unlike those other teams, PSG made them pay.

The ‘big dogs’ always have quality players who make their chances count. Their clinical finishing is the fine line between Barcelona losing a match by a major margin and Barça taking the victory.

Barcelona in big games this season:

Being able to dominate games is a major factor in Barcelona’s playing style. While most teams play deep and allow Barcelona to pass the ball around passively, the heavyweights bring the game to Barcelona. They exploit the tactical immaturity of the team and utilize the team’s lack of pace and the vast spaces left behind. The moment the Azulgaranas become indecisive, the opposition strike.

Barcelona do not have the players like Atletico Madrid to sit back and absorb pressure. The Blaugranas have to play with intensity, not allowing opponents to settle down and take hold of the game. But the current squad seems incapable of finding this intensity in big games. Mindless horizontal passing and stagnation in defence continue to plague performances.

Koeman deserves credit for recovering the team mentality for the most part. Yet it is comparatively easy to make a comeback from 2-0 down against a team like Granada. Inevitably, those teams go into the game expecting to lose in the back of their head.

However, teams like Juventus and PSG fight to win. They have experience playing tough games. These teams learn from their mistakes and come back stronger after falling. They also have history on their side.

Heartbreak and pain have left their mark on several players. And these are the very players who continue to form the backbone of the team. Players like Gerard Pique, Lionel Messi, Jordi Alba and Sergio Busquets. Players who are the captains and veterans of the squad.

Just as important as tactics in major games, another important factor is leadership. While facing high-pressure situations, one needs the veterans and the captains to show the way forward. However, frustration seeps into Barcelona’s players as they see history repeat itself time and again.

Barcelona need players like Sergio Ramos, who have the mentality of lions. Ramos displayed his quality when he led Real Madrid to victory against the Blaugranas. It is at times like this that the team yearns for legends like Carles Puyol.

This is why Barcelona miss the injured Ronald Araujo and Ansu Fati even more. These youngsters are free of the shackles of the past. They only want to play football and win.

What next for the club?

Barcelona are likely going to go trophyless this season. However, the club and the fans must look beyond this season. Mistakes have been made throughout the past few years, and it is going to take a long time to recover from them. But to win trophies, a team needs to win important games consistently.

While Ronald Koeman is to blame for these losses, so are the players. Repeatedly changing the manager is not going to have a major effect during such games as long as the base group of players remains the same.

A complete overhaul is necessary in order to beat strong oppositions at the biggest of stages. A clear and concise project needs to be implemented. The election of a new president is one of the first steps towards the future.

Barcelona desperately need players who can swiftly carry the ball and run into the spaces upfront. Despite spending the big bucks on forwards, the team still relies on a central midfielder like Frenkie de Jong to run in behind the defence and win penalties or score goals. These are runs that Antoine Griezmann and Ousmane Dembele should be making as well.

Since signing new players is out of the question, young blood from La Masia need to be integrated into the team. Academy graduates like Alex Collado and Konrad de la Fuente should be experimented with in the absence of Ansu Fati. In defence, the sluggish partnership of Gerard Pique and Clement Lenglet, too, needs to be replaced.

The sense of uncertainty within the team too needs to be taken care of. These may be minor issues, but they take a toll on the persons involved. One at a time, each problem needs to be handled with care and patience. Only then can the team return to being the stalwart it once was, steamrolling every opponent that comes in its way.