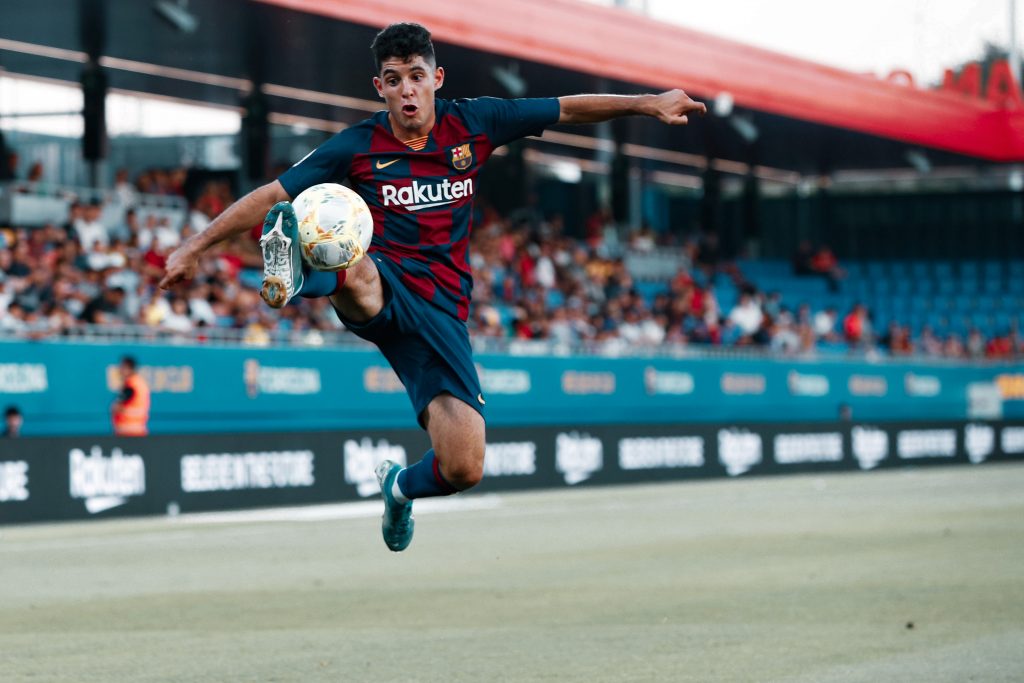 Header Image by Alfosport via Imago

As Barcelona B face Valladolid Promesas at Estadi Ciudad de Malaga, we take a look at the very crucial match-up in this match preview.

Competition: Segunda División B play-offs for promotion to Segunda, first round

For a team like Barcelona, for whom youth development is one of the core philosophies, the Barcelona B team’s results are highly important as well. After getting relegated to Segunda B, Barcelona B started another quest to get promotion to the Segunda division. After a hard-fought season at Segunda B, the B team under the superb guidance of García Pimienta, has reached the playoffs. These playoffs are the stepping stones towards the Segunda. This is a very important match for the Blaugrana youngsters as they face Valladolid’s B team, the Valladolid Promesas and in this preview, we’ll take a look at this match-up.

Due to the unfortunate pandemic this year, the playoffs have had a few changes made to them. The qualifying criteria are still the same. The top four teams of each B league are drawn into the playoffs. From here, the usual final between the two winners to decide the overall Segunda B winners was removed. Instead, the losing semi-finalists will enter the play-off round for the remaining two promotion spots.

Basically, the Barcelona B team will need to do their best in the next three rounds to gain promotion.

For Barcelona B, this match-up has gotten tougher than expected. Firstly, Ansu Fati, Riqui Puig and Ronald Araújo won’t be allowed to play in the playoffs. Barcelona coach Quique Setién clarified this in a recent press conference.

The fact that some of the strongest players that Barcelona B had throughout the season along with Ansu Fati, who made the jump to the first team from Juvenil A, won’t be present to help them win promotion is a major setback. Along with this, Álex Collado won’t be able to play as he recently suffered an injury. For Valladoid, this is a major advantage. The reason for their absence was specified so as to not avoid any complications in the Champions League.

“I would have liked the circumstances to be different, I’m sorry but it will not be possible for them to play with the B team”

Players such as Kike Saverio, Guillem Jaime, Chumi, and Hiroki Abe who were important parts of the team won’t be able to play as well due to their contracts not being renewed. This should mean that we see a lot of Juvenil A players get a chance to play. Especially since 9 of them have been announced in the squad.

Many people are of the opinion that since getting promotion to Segunda would mean that our La Masía players get more playtime at a better level next season. This is a very valid argument. The fact that Ansu Fati, Riqui Puig, and Ronald Araújo have still been restricted from going for the play-offs is quite controversial. But there is a silver lining.

With their absence and the many expired contracts, we see that 9 Juvenil A keepers have been called up. These players will get an opportunity to play for the B team in an important match, which will definitely help them as they rarely get to play at a match this important. Players such as Monchu, Ilaix, Jandro will get to prove that they are capable of filling up the massive personalities that Puig and Collado provided. It’s a good chance for them to display their abilities. For players like Konrad, Peque, Nico it’s a good chance to show that regardless of the result, the B team will be in safe hands next season.

And if they do get promoted, it would be a major boost for all the La Masia graduates looking at their seniors and looking up at the players who made it into the first team from La Masia. The players at Barcelona B would next season have an excellent opportunity to develop in the Segunda against the more experienced teams.

Winning this match would of course be an achievement for Pimienta. But if he were to win the playoffs in such difficult circumstances, Pimienta’s status as an excellent manager and a youth-development expert would only be solidified even more. This should make him a real contender, and not a plan B, in case Setien has to leave Barcelona in the near future. Pimienta definitely deserves it and this would be a great opportunity for him to show that he is ready.

Barcelona B face a very challenging match-up now. It certainly is a daunting challenge. Even though they don’t have the services of many of their players, they still have their greatest weapon in Garcia Pimienta. He is more capable than almost anyone to lead this group of youngsters with whom he has worked closely for such a long time.

Pimi, along with his players are a capable team. This match however, is much more than just a win-lose moment. Winning this match would signify that another generation of promising players such as Alena, Puig, Miranda, Oriol is coming through. Not only this, but it would provide the juniors, especially the Juvenil A and Juvenil B with hope that there is a way to get close to the first team and that the Barcelona B team is still a capable force that they should strive towards aiming for. The match against Valladolid Promeses is important not just for Barcelona B but for La Masia itself.