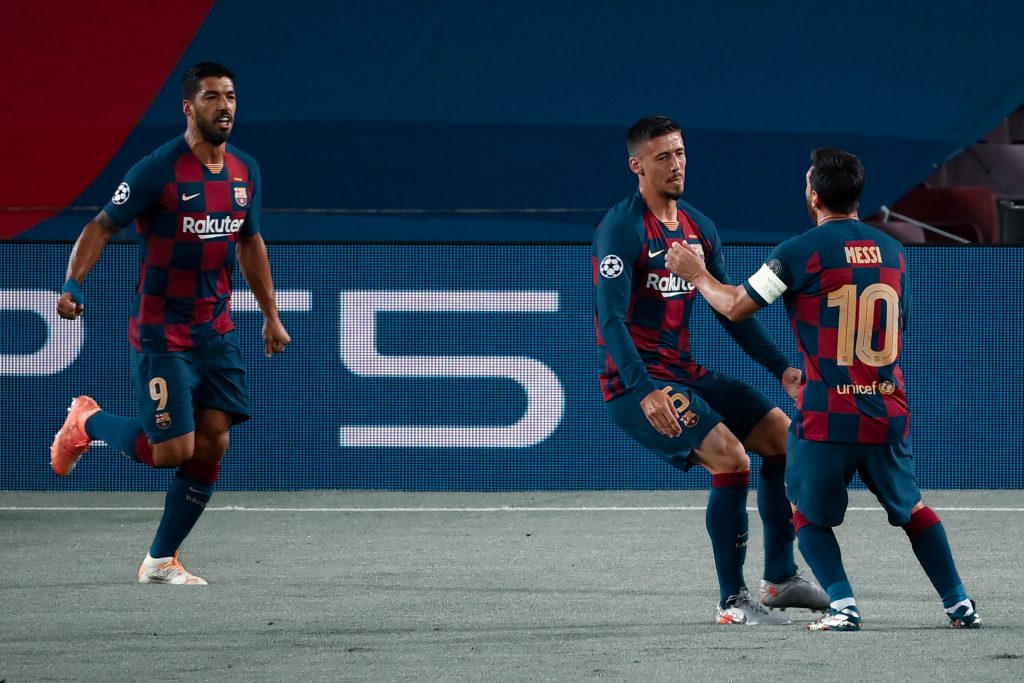 Mixed feelings for the overall display, but the result was more than good enough; these are the ratings for each Barcelona player in the 3–1 victory over Napoli in the second leg of the Champions League last 16.

Excellent result and proficient performance from the club that seemed done and dusted a few weeks ago. While it would be fair to label the match as a tale of two halves with Barça losing the momentum it had built almost completely in the second period, the blaugranas still managed to complete the daunting task of eliminating Gennaro Gattuso’s Napoli as they now face Bayern Munich in the quarter-finals of the Champions League. Here’s how the Barcelona players fared in their victory against Napoli:

As dominant as Napoli were, Ter Stegen was not tested as frequently in goal since the defence in front of him maintained incredible composure. While he was unfortunate to have conceded a penalty, which denied him from securing a well-earned clean sheet, the German’s ball distribution was marvellous and was a major factor in allowing the blaugranas to play against the Napoli pressure with comfort.

With Barcelona lacking a reliable figure at right-back, Nélson Semedo put in an absolute shift to silence many doubters. The Portuguese was utterly incredible in the first half, where he was seen taking on all the Napoli players and creating innumerable dangerous attacks by himself. Throwing shades of a certain Brazilian, he kept Lorenzo Insigne out of the game smoothly. Although in the second half he had his defensive work cut out with Insigne having a good half, Semedo stayed firm in his defence and didn’t allow the Italian wizard to get into prominent goalscoring positions.

Piqué proved to be the towering figure in the box and broke down any Napoli offence that came through the air. Nevertheless, a costly semi-error very early in the game almost gave the Gli Azzurri a goal which would have been absolutely catastrophic for the azulgranas.

Barcelona couldn’t have asked for a better successor to Samuel Umtiti. Clément Lenglet showcased a complete defensive masterclass where he was winning tackles, blocking shots and basically not letting the Neapolitans have any real look at goal. On the other end, he scored a brilliant header from a corner to initiate a flurry of goals for the culés. A memorable performance from the upcoming French defensive star.

Jordi Alba fulfilled his role well, though was barely challenged by José Callejón on his wing, which didn’t allow him to be as defensively involved. However, he had several good sequences of short passing with the midfielders and looked to link up well with the attack. A version of Alba where he is in unison with the attack is a dangerous sight for any upcoming opponents.

Dancing in balletic fashion with the ball at his feet, Frenkie de Jong was simply a cut above everyone else. Marred with an injury that ruled him out in La Liga after the restart, De Jong’s comeback was worthy of endless admiration. The Dutchman controlled the pace of the game, dominating almost every part of the pitch and marking his territory whenever he went. A highlight play for him was when he effortlessly sent Messi a stunning ball which Lionel Messi ended up converting, only for it to be ruled out due to a questionable call made from VAR. The Frenkie fiesta was a sight to savour.

Iván Rakitić was tasked to occupy the pivot role in Sergio Busquets’ absence, which he played somewhat successfully. Rakitić made some vital tackles as his defensive contribution was noticeable throughout the game, even earning himself an assist for Lenglet’s header. Nonetheless, a needless foul in the final third saw him give away a penalty, which the Italians were able to capitalise on. While the Croatian midfielder did a decent job, Busquets‘ shoes proved to be too big to fill.

Sergi Roberto’s performance will go unnoticed by many, but he put in a diligent exhibition with his work ethic helping Barcelona constantly regain possession and move upfield. The Catalan played a valiant role in midfield, despite De Jong stealing all the limelight

Although Antoine Griezmann showed glimpses of his undoubted quality, the Frenchman seemed to be snoozing for a majority of the game as his presence was rarely felt. He, as always, managed to be an asset with his work ethic, even so, Griezmann failed to link up with his partners in attack and couldn’t challenge goalkeeper David Ospina on a regular basis. For a player worth 120 million, such standards cannot be set.

The menacing man was the centre of attention throughout the 90 minutes, mainly in the first half, where he ran riot in attack. Napoli struggled to keep him at bay as he scored an excellently executed goal to broaden the local’s lead. Stumbling and failing to keep his balance in Napoli’s tightly congested box, he left Ospina for dead, scoring a marvellous curler.

Despite an injury scare, no one or nothing could stop Lionel Messi | Photo by Lluís Gené / AFP via Getty Images

Leo went onto wreak further havoc with another goal, but lady luck showed her true colours, preventing Leo from bagging what seemed to be a fair goal. A foul right before the half-time whistle enabled him to win his side a penalty, which Luis Suárez converted with ease.

Nothing too special, but nothing too discouraging either, which should be perceived as a big win considering Suárez had looked exceedingly shaky since the restart. The Uruguayan scored from the spot and was efficient with his first touch, providing a degree of threat in attack. The goal would do a world of good for his confidence.