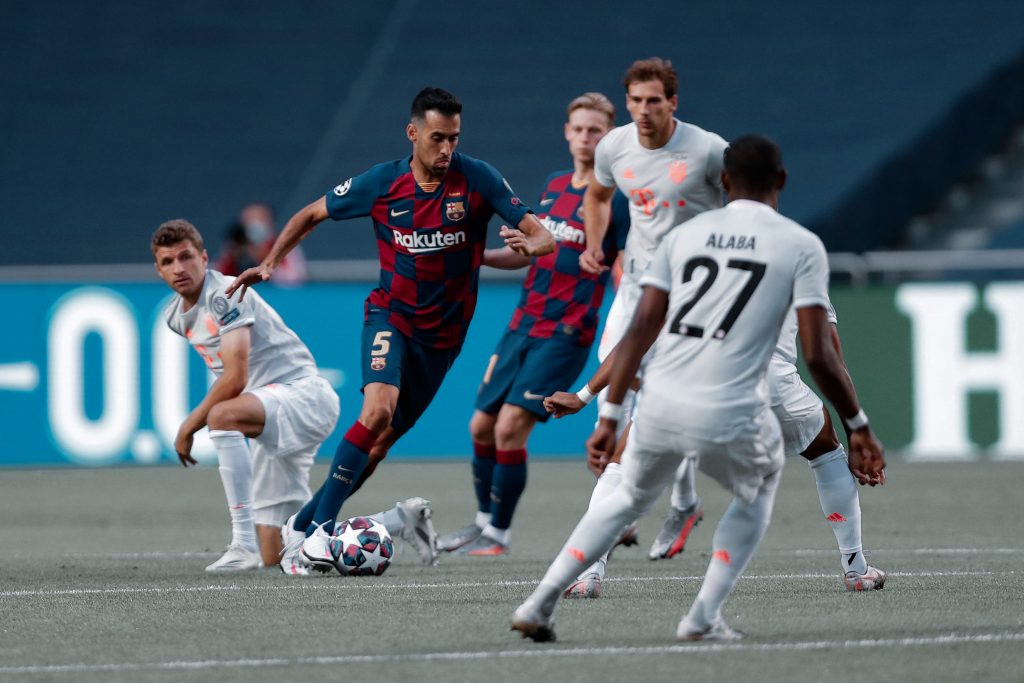 Humiliation and disaster from the club, collective and individuals. In a horror night, these are the ratings for each Barcelona player in the historic 2–8 loss to Bayern Munich in the Champions League.

Barcelona, once more, came crashing down like a house of cards on the European stage, where Bayern Munich handed the Catalans their most humiliating defeat in recent history. The greatest club to possibly ever exist fell from grace in the most demeaning and mortifying manner possible, but the worst part is: the decline had begun years ago. Roma and Anfield may have felt like the nail in the coffin, but in reality, they were just appetizers, a glimpse of what was ahead.

With structural changes desperately required and a surge of new blood, Barça must, at long last, revitalise and rebuild. The vibrant and lively football it once boasted of has now been sucked out to the core. Nevertheless, despite holding the one’s in charge accountable, this would have never been possible without the disastrous performances displayed by the blaugranas. Here’s how the Barça players fared in the fateful night in Lisbon:

Barcelona’s most reliable and reputable player failed on the big stage as Ter Stegen spent 90% of the match picking the ball out of his net. Whilst he could have done a far better job in denying Bayern’s bloodthirsty forwards from feasting infront of goal, it was his dodgy distribution that truly deteriorated his performance. The German struggled to play out from the back and consequently gave the ball away on innumerable occasions.

Barça’s most trustworthy defender since the restart looked broken and in shambles as he let Bayern’s blistering attack open the defence up countless times. Despite the ghastly result, Piqué had a few moments to shine where he made some key interceptions and blocks. Woefully, it meant nothing in the grand scheme of things.

Arguably Clément Lenglet’s worst ever performance in a red and blue shirt. He was physically outmuscled and mentally outmatched. Lenglet, as did every Barcelona player on the field, floundered whenever Bayern pressed up high. The Frenchman gave away possession in dangerous areas, even failing to contain pacy wingers such as Serge Gnabry, who effortlessly slipped past him to beat Ter Stegen in goal. An awful day for a defender who was beginning to set a high bar for himself.

Shocking…Simply outrageous. Nélson Semedo’s career was tarnished at the hands of Bayern, more specifically, Alphonso Davies, who not only made him look like a fool in the second half, but a mere Sunday league defender. The Portuguese consistently went high up the field, leaving the right flank exposed and naked for Bayern, who repaid his lack of positioning with a barrage of goals. Semedo’s defensive capabilities, which are regarded as his best trait, proved to be his worst on the night.

Jordi Alba was just another deer caught in the headlights, making a mockery of himself on the left flank, where Bayern ran rampant. Although he earned himself an assist, his defensive contribution was as minimal as it got. Infact, he contributed to the opposition more than he did to his team, which sums up the majority of the match for Barça. Jordi was caught out several times, proving why he has been a measly shadow of himself ever since that traumatic defeat to Liverpool.

The bridge that connected all departments was disfigured as Bayern bulldozed their way through him and constantly forced him into making errors or losing the ball. Sergio Busquets’ ageing legs and inability to distribute the ball caused him to frequently panic and malfunction, a very rare sight from the veteran. It was his performance that probably described Barça best: brilliant in his prime, but inept nowadays.

De Jong’s influence against Napoli was a tremendously optimistic sign for Barcelona, but he disappeared on the grand occasion, giving possession away cheaply and barely building any sort of attack. Der FCB were, simply put, all over the youngster.

“How we played is a shame. A shame for a club like Barcelona, ​​with the players we have. After half an hour they had already scored four. We were disappointed at half time, but believed there is a chance. In the second half we were even worse, however”

As has been the case several times over the years, Sergi Roberto failed to adjust on the right flank. His combination with Semedo was a severe factor that led to the culés‘ horrific demise. He didn’t bother to track back, nor did he complement Semedo in the attacking front. The Bayern midfield toyed with him through their lionhearted pressing. Sergi was just one of the many players that fell prey to their utterly unmatched intensity.

Arturo Vidal failed to walk the talk, just adding fuel to the fire with his needless words post match. Arturo’s attacking outlet was invisible, his defensive participation undetectable and technical quality, out of sight. Bayern bullied the Chilean throughout the course of the 90 minutes, making him eat his words in the worst possible fashion.

Messi was melancholic and struck with horror as his biggest desire seemed to be to hear the full-time whistle blow. After a fairly energetic start to the game with him sending in some clever crosses and even hitting the post once, Leo lost all will to play once the German side started ensuing chaos in the final third. Messi cannot be blamed for such dismaying results, but should surely be questioned for his lack of authority and communication, especially when all eyes were on him.

Who would have thought? Luis Suárez with Barcelona’s only goal –– excluding David Alaba’s own goal –– on the night. Football’s unpredictability is almost scary at times. Nevertheless, the Uruguayan owed this to Barcelona after his constant spells of disappointments and inconsistencies. With a sleek feint which left Alaba for dead, he buried the ball behind Neuer. Even so, a goal wouldn’t be enough to justify his clumsy touches and non existent pace.

His arrival couldn’t impact Barcelona in any way whatsoever. He pressed valiantly and came back to even give his defence a helping hand, but his influence in the final third was nowhere to be seen. Barça’s mega star failed to assert his authority on the field, something he was originally signed to do.

With the game already done and dusted and the azulgranas‘ fate already sealed, Ansu Fati had no time to make an impact or turn the tides. Though, his bursts forward and energetic legs in the little time he had were what Barça needed right from the beginning.