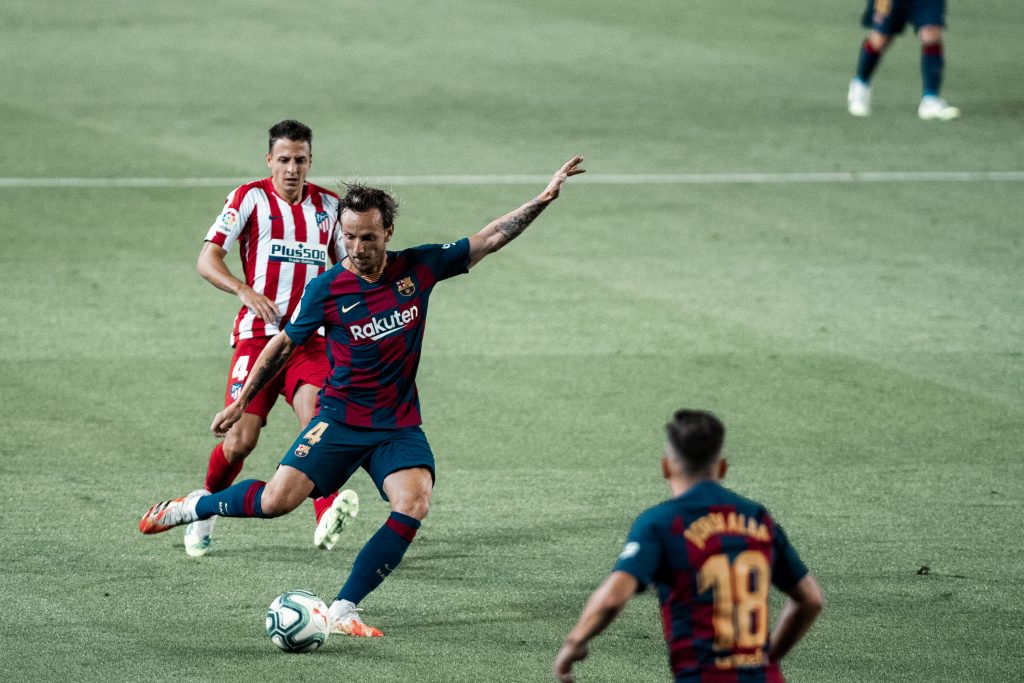 A functional collective, but far from perfection with individual mistakes. These are the ratings from the Barcelona players in Tuesday’s draw against Atlético de Madrid.

In a must-win against Atlético de Madrid, Barcelona got the same result than on Friday at Celta de Vigo‘s Balaídos. Barça got the lead twice, through a Diego Costa own goal and then a Lionel Messi penalty. However, Atleti also equalised twice, both times from the spot thanks to Saúl Ñíguez. Two points that, if Real Madrid beat Getafe on Thursday, could see Los Blancos extend their lead at the top of the league to four points.

Against Atlético, Barcelona looked encouraging for most of the match, but the inability to create regular chances and sporadic errors led to such draw. How did the locals’ players fare on Tuesday night?

Marc-André ter Stegen was unsurprisingly an undisputed asset with his brilliant distribution, but the German shot stopper was woefully forced to pick the ball out of his net twice as he conceded two penalties, one of them being outrightly unjust. While Ter Stegen wasn’t at fault for the blaugranas‘ drop of points, he made a slight lapse of judgement by coming off his line to deny Diego Costa’s penalty, which ultimately led to the penalty being retaken.

After starting every game since the resumption of football, fatigue and tiredness seemed to have slightly hindered Gerard Piqué’s performance. Although he looked solid at the back on most occasions, establishing a well-worked partnership with Clément Lenglet, there seemed to be a lack of composure in the Spaniard’s gameplay. In addition, he failed to track back to deny Yannick Ferreira Carrasco from winning his side a penalty. Nevertheless, one can’t hide the fact that Piqué was an imposing figure aerially, winning five out of six duels.

Clément Lenglet was an immediate upgrade to his French compatriot, Samuel Umtiti. The former Sevilla man was calm, composed and collected with his adept positioning making a huge difference on the game, while he also proved to be excellent in possession. Lenglet for most parts didn’t seem to put a foot wrong, winning all his aerial duels and faring well on the ground as well. Despite the unfortunate outcome, If there’s one man who doesn’t deserve to be lambasted for the two goals conceded, it must be Clément.

Incredibly predictable and foreseeable on the ball, and barely posing a threat in the final third. During Barcelona’s forbearing build-ups, Nélson Semedo minimally contributed and failed to assert his authority as he burst forward cluelessly on the right hand side. Notwithstanding he won Barcelona’s penalty in the second half and made a few darting runs, the Portuguese couldn’t add much width to his side or disrupt Atleti’s compact defence.

Similar to Nélson Semedo, Jordi Alba seemed a headless chicken on the flanks, barely initiating a move in attack. Despite being frequently pinned back on the defensive end, he made no attempts to find an opening in Simeone’s rigid backline. Underwhelming and insipid display for Barça’s toothless left-back.

Defensively Sergio Busquets fulfilled all his duties terrifically and denied Atlético from producing any serious threat moving upfield. Although the veteran was unavailable in the previous game against Óscar García’s Celta de Vigo, Busquets came back with a bang, orchestrating the game from the base of midfield and breaking down plays on countless occasions. Passing the ball with precision, Busi had a major role to play in Barça’s 2–2 draw.

While Barcelona were struck with dullness and characterless football, young Riqui Puig was the lantern leading the way, illuminating the pitch with his brilliance on the ball. His exquisite touches, potent positioning and magnificent mentality helped Barcelona be relatively vertical and imaginative in the centre of the park. At just 20 years of age, the youngster displayed an immense desire and hunger to win the ball back. Once again, the jewel of La Masía proved he is more than capable of starting high-magnitude fixtures. A boy with a bright future, if handled with care.

Iván Rakitic continued to be a major influence for Barcelona, on and off the ball. He rarely lost possession and executed a few smart plays, adding balance in midfield. Even so, he lost his charm in the second half, failing to impact the game in any sort of way. As the match progressed, the Croatian became increasingly silent, and was the first to be subbed out for Sergi Roberto.

After a poor performance against Celta de Vigo, Arturo Vidal was unable to make up for his dismaying display, carrying on with his upsetting form. The Chilean was a tireless workhorse who would lash out on the opposition at any given opportunity, but he was ineffective with the ball at his feet and cost his side a penalty.

For a player of his calibre, an exhibition such as this one is nothing but demeaning, degrading and distressing. Luis Suárez had high expectations after sealing a brace against Celta de Vigo, but he had no intentions of living up to the fans’ belief as he shamelessly missed out on several chances infront of goal. Added to that, he was fruitless when the ball landed towards him and unproductive once found in favourable areas. A lackluster display from Suárez, one that unquestionably demonstrated his days at the club are nearing an end.

Lionel Messi brought up goal number 700 as a professional on this special occasion, but, while he was able to humiliate Jan Oblak with a cheeky paneka, he seemed unavailing in the final third, missing out on a couple of good opportunities and struggling to create as much as he normally does. In spite of being Barcelona’s only source of attacking input, it was an iconic, yet underwhelming, performance for the little magician’s colossally high set standards.