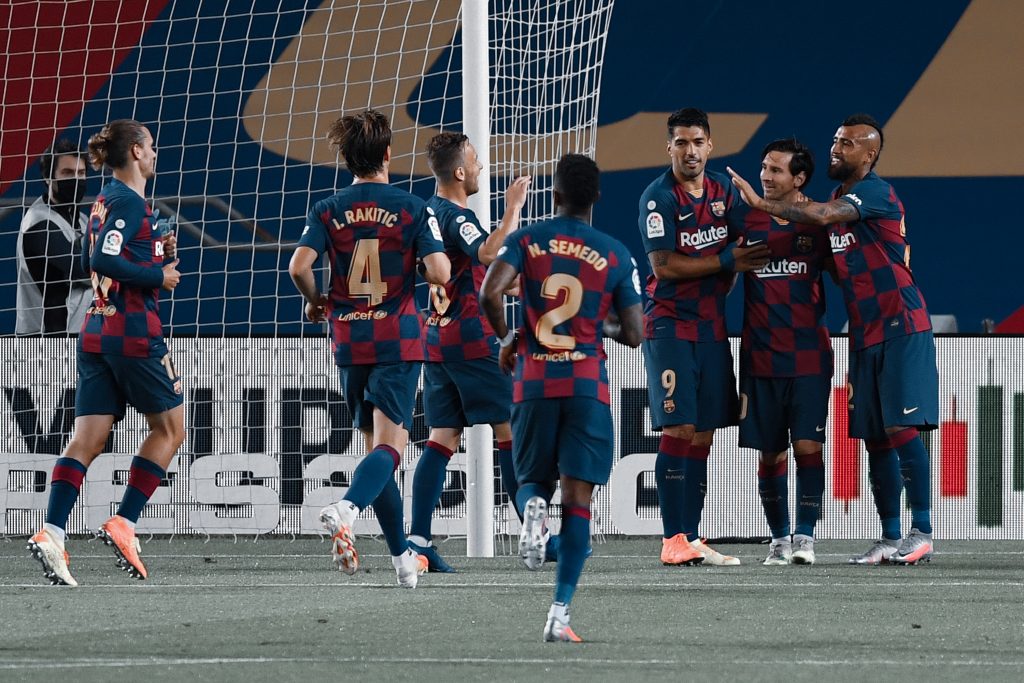 In the return to the Camp Nou, Barça got a well-earned win through Ansu Fati and Lionel Messi. A match review of the Barcelona 2–0 Leganés.

Top or bottom, no rival is easy in La Liga. Regardless of the individual quality each side possesses, everyone is ready to put up a fight in every game. Anyone can beat anyone. In fact, sometimes the most desperate, and the most limited, groups are the ones that can be trickiest and most challenging. With nothing to lose while they fight for their lives, they will try to compensate for their lack of talent with their ferocious competitiveness and on-point organisation.

No one symbolises this more than Leganés. Orphaned after the exits of their stars Youssef En-Nesyri in January and of Martin Braithwaite in February, the Madrid-based club are definitely struggling to keep their head above water. But here they were. At the Camp Nou, against leaders Barcelona, with their main man Óscar Rodríguez suspended, and with the poorest goalscoring record in La Liga. Actually, in their starting XI, Lega had a frightening total of…one goal. Of all the starters on Tuesday, only midfielder Roque Mesa had found the net for Leganés this campaign.

Little does the form or past matter when you are fearing for your future. As if Barcelona were no opposition to be scared of, Leganés combined a reactive with an ambitious approach. Solidity and defensive organisation is often wrongly associated with parking the bus, but Los Pepineros utilised a fairly high back five line, and with a lot of compactness and aggressiveness in midfield. With the overcrowding in the central areas, creating and finding spaces was far from plain sailing for Barça. An extremely fast and precise ball circulation was needed, but the blaugranas were by no means moving the ball with the optimal speed and finesse to break such a coordinated block.

The best antidote: patience. Patience, move the ball, and tire the opponents. Even if Quique Setién had previously suggested that the new five substitutions rule could favour the defensive sides, as they could keep their players fresh in spite of having to chase the ball, on most occasions it looked like it was a matter of time for Barça. On other occasions, though, time seemed to be running in Leganés’ favour. Only their problems to convert their chances prevented them from frightening the locals even more.

Again, individual brilliance, which is just what Lega missed, saved Barcelona once more. Nevertheless, this time it was not the usual Lionel Messi, Gerard Piqué or Marc-André ter Stegen who became heroes for the culés. Instead, it first was Clément Lenglet. With key interceptions and, mostly, a vital save on the line, he kept the gates closed for the Spanish giants.

As Barcelona continued to move the ball with inexhaustible patience but some lack of inspiration, it was 17-year-old Ansu Fati who stepped up too. In the 42nd minute, after an assist from Junior Firpo, the teenager had little space to shoot but still smashed home the opener for Barça with a low strike into the far bottom corner. It is usually said that opening the scoring is the hardest thing when there are so little chances and spaces, but it was the young Ansu who, once again, showed that age is not a problem for him when it comes to impressing through goals or performances. Pressure relieved.

With the deadlock broken, Lionel Messi wanted to join the party too. Rebellious and determined, he was willing to make a contribution too. In the end, stats will exclusively show that he only scored a penalty goal. But what preceded cannot be described by numbers. A well-timed pre-assist to substitute Nélson Semedo ended with Antoine Griezmann finding the net, but VAR had to re-check it before ruling it out for offside.

However, Messi did not stop there. Roughly in the 69th minute, he won the ball in the halfway line, drove it forward, nutmegged a rival, battled with two defenders, completed a nice one-two with Luis Suárez, and then awarded his team a penalty inside the box. After a long wait, VAR gave it validity and Leo did not miss from the spot. 2–0.

Enough was enough, said Messi. The result would not change, in spite of a couple of good chances for both sides. With the dense schedule that awaits every single team in La Liga, Quique Setién introduced more substitutions with Friday’s visit to Sevilla in mind. The likes of Gerard Piqué, with a knock, Sergi Roberto and Sergio Busquets were subbed out, just like Frenkie de Jong was rested for the full 90 minutes.

While for many minutes it did not look like a comfortable fixture, Barcelona ended up ticking all boxes they could possibly tick. Three points, two goals, clean sheet and a few rotations. Even the young Riqui Puig got some minutes to showcase his usual energy and personality. He got a couple of chances to score too, but that will have to wait. If Barça continue to record all wins after the break, time will run much faster.