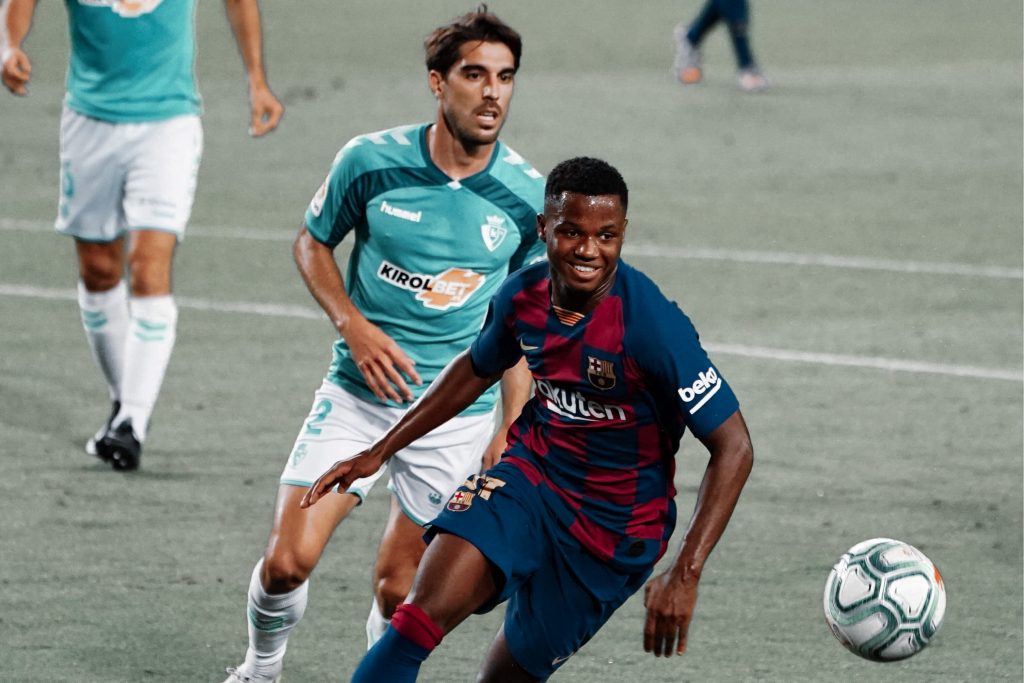 Disappointment from start to finish. These are the ratings for each Barcelona player in Thursday night’s 1–2 loss versus CA Osasuna.

Barcelona needed to beat Osasuna at the Camp Nou on Thursday night to at least seize any small chances of winning the league they had left and, in case of a Real Madrid victory, show an improvement ahead of the Champions League. But it was all disappointment for the blaugranas, losing 1–2 and seeing how Madrid got a 2–1 win over Villarreal to be claimed La Liga champions.

Regarding the game against Osasuna, the second half was much better in comparison to an atrocious first half, and Sergi Roberto’s addition at right-back allowed Barcelona to be comfortable in possession after proceedings. However, in the last few minutes, Barça threw everyone up front to get a goal, which allowed Los Rojillos to hit the locals on the counter as they sealed a heartbreaking winner in the concluding moments of the game. Here’s how the players performed in their 1–2 defeat against Osasuna:

Not Ter Stegen’s best of days between the sticks. He would have saved the second goal on any other day but the shot, which was straight at him, unfortunately deflected into the net.

Piqué was one of Barcelona’s better defenders and his positioning on the counter-attacks prevented the Catalans from conceding goals in excess. Nonetheless, he continuously pushed up the field in the last few minutes, which resulted in Osasuna scoring. While he saw his side concede twice, he was competent on the ground and above average in the air.

Lenglet struggled a bit since Osasuna preferred to play the ball through the air. Consequently, he was not as efficient at defending the crosses. It could well be argued that the Frenchman’s positioning for Los Rojillos‘ winner was poor as well.

Semedo was defensively mediocre and failed to continue his solid form. The Portuguese was mostly playing up the field, leaving the right flank exposed just for Osasuna to exploit on the break. He needs to work on his defensive positioning, especially if he desire to become a regular starter at the club.

Junior Firpo looked completely lost and out of the game. His tackling was poor and he was never really winning the ball back. In addition, he did not provide Barcelona with anything upfront and was a source of dispossession whenever the Dominican was on the ball.

Riqui Puig was one of the few individuals trying to make something happen in the first half as he looked to create openings with his mobility on the ball. Even so, Osasuna’s compact defense made it impossible for Riqui to find a way through and eventually, he was brought off for Frenkie de Jong.

“I am going to count on Ansu Fati, Riqui Puig and Araújo. They are going to stay with us and won’t be involved with Barça B in the playoffs [for promotion to the Second Division]”

Uninspiring, dull and, once again, throwing shades of his unwanted former self. Iván Rakitić had a promising start since the restart, though clearly lacks consistency and stamina to keep up with such demanding schedules. He received a yellow card as well, which means this was his last league game for Barça this season. An exit this summer is certainly on the cards.

One of Barcelona’s few reliable players, Sergi Roberto, was deserving of a better outcome. He tried to make piercing runs forward in midfield and was an instant upgrade to Semedo at right-back. While Mister Versatile may have failed to contribute much in attack, Sergi was, throughout the course of the game, a threat for the opposition.

Messi, more than anything, looked exhausted. Physically and mentally. Leo’s frustration was evident throughout the game and his uncharacteristic celebration after scoring displayed that. In spite of him looking worn out, the Argentine was Barça’s only major threat in attack. Scoring an equalising free-kick, he proved his talent is simply limitless.

“I’ve already said that if we continued like this we wouldn’t win anything in Europe, and now we didn’t even manage to win the league”

Braithwaite seemed to connect well with Messi on a few occasions, but he was ineffective in the final third as he struggled to break down Osasuna’s incredibly low block. Although the Dane forward scored a neat little goal, he was unfortunate to have Lionel Messi in an offside position. A disappointing game for a player fans had high hopes from.

Atypical performance from Ansu Fati, who couldn’t provide his side with width and flare he normally does. Fati strived to find opportunities on the left flank as he frequently cut inside, but the 17-year-old lost possession a few times and couldn’t provide his usual impact.