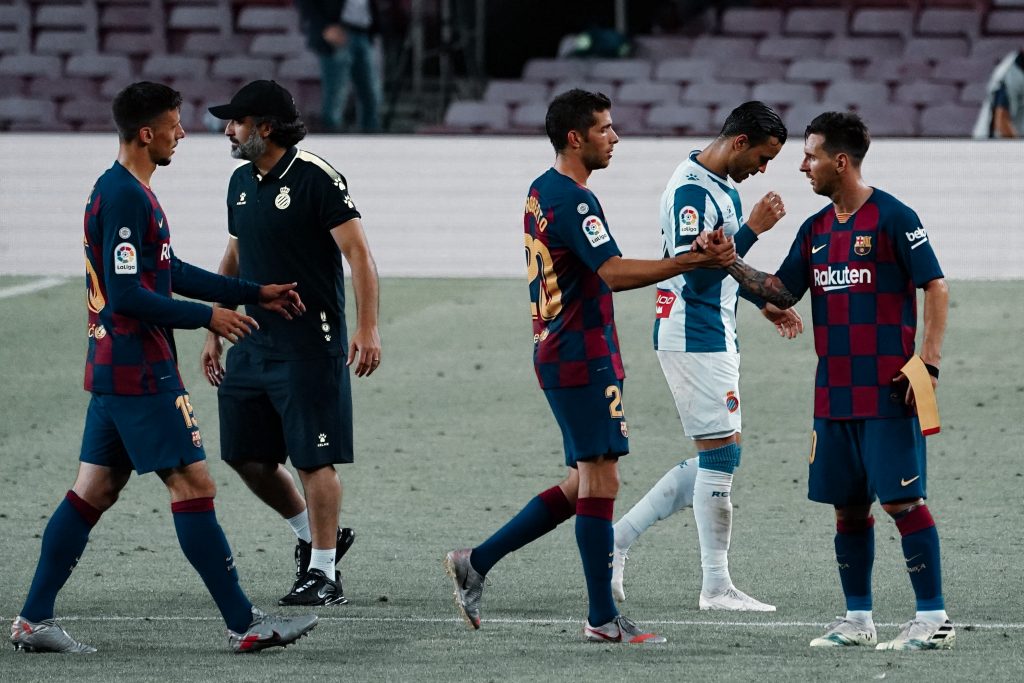 Unimpressive but enough to get the three points. These are the ratings for each Barcelona player in Wednesday’s 1–0 win over Espanyol.

While hopes were high after Barcelona thrashed Villarreal 1–4 away from home on Sunday, the blaugranas didn’t exactly replicate the same vibrant performance against Espanyol on Wednesday, barely scrapping a 1–0 victory. Nevertheless, Quique Setién’s side managed to get the job done as a Luis Suárez goal in the 56th minute was enough to relegate city rivals to the Segunda División. Here’s how the players performed:

A well deserved clean sheet for Marc-André ter Stegen, who made some vital saves for his team. He denied a dangerous shot from Adrián Embarba in the first half and continued making decent saves between the sticks after proceedings. Although the German shot-stopper wasn’t challenged much, he did well whenever the opposition took looks at goal.

Despite starting games with such consistency and barely having any rest, Gerard Piqué continued putting in spirited performances at the back. The Spaniard was often left isolated whenever Espanyol charged on the counter, but he maintained a solid presence in defence, positioning himself with perfection, and emerging successful in every battle he had to engage in. Aerially, he was a menace, winning 10 out of 14 duels, and on the ground he won two out of two duels. Along with his defensive prowess, the veteran contributed heavily to Barça’s build-ups.

While Clément Lenglet had been overshadowing his compatriot in defence over the past few games, he didn’t seem to be as imposing as Gerard Piqué on the night. Even so, Piqué’s superior performance mustn’t hide the fact that the Frenchman was confident on the ball and completed his defensive responsibilities effectively.

Nélson Semedo was unimpressive owning the right flank as he was mediocre in attack and careless in defence. The Portuguese had no impact moving upfield and rarely bothered to track back, leaving Piqué abandoned in transitions. Eventually, he was brought off for the second half.

Barcelona’s speed demon Jordi Alba looked slightly fatigued and lethargic on the field, not asserting the impact he typically has in the final third. Alba sent in some promising low crosses, but they never found a suitable outcome. Added to that, he frequently left his position in defense exposed.

“If we didn’t score in the first half or Barcelona didn’t create more chances, that’s virtue of the rival, who were very well organised. I think they make it difficult for Nélson Semedo and Jordi Alba to push up on the flanks. But eventually the chance came and I’m delighted to be able to take it”

A classic Sergio Busquets exhibition. The single pivot was once again Barcelona’s puppeteer in midfield, pulling the strings and barely seen putting a foot wrong. He was always a reliable passing outlet for his teammates, and a remarkable asset in defence, winning nearly all his duels. He may be losing the ability to complete the full 90 minutes, but Busquets’ intelligence will invariably be unmatched.

After displaying a few admirable performances last month, Iván Rakitić couldn’t meet the standards he had set. Despite being a dependable option in the centre of the park, he failed to provide his team with the creativity and innovation required as he was often hesitant to take risks. Still, the Croat did well defensively, making a couple of decent challenges.

Sergi Roberto played two positions for the azulgranas, both of them with extreme efficiency. Whilst he was far more impressive at right-back, Roberto was reasonably influential in midfield as he looked to be forward-thinking and imaginative for the hosts. Quique Setién’s men aimed to be build most of their plays from the left side of the field, which allowed Sergi to be on the ball quite frequently in the first half. After replacing Nélson Semedo on the right, he impressed with his end product.

Sergi Roberto had to be Mr. Versatility once more as he played in midfield in the first half and at right-back in the second | Photo by Alex Caparrós via Getty Images

No contribution on the scoreline for Lionel Messi, but the Argentine was practically Barcelona’s only major threat in attack. He linked up well with his partners in attack and managed to get out of Espanyol’s tightly imposed markers. Although he failed to find the back of the net, he had a brilliant volley denied by Diego López in the second half.

Luis Suárez was extremely inefficient in possession and a tremendous liability on the field. He provided no encouraging movement off the ball with his staticity in attack scarecely troubling the Periquitos. However, a tap-in after proceedings hid a disaster-class from the Uruguayan, making him the club’s third highest goalscorer.

“I’m very happy and proud of becoming the club’s third top scorer. I am lucky to have worn this Barça shirt”

Notwithstanding Antoine Griezmann wasn’t able to reproduce the same display he had against Villarreal, the Frenchman had a far more convincing display than his Uruguayan partner in crime and actually provided his team with a certain level of danger in the opposing half. He was heavily responsible for the hosts’ opener and even created a great chance for Suárez in the first half, which he couldn’t capitalise on. Signs of improvement in the World Cup winner’s gameplay.