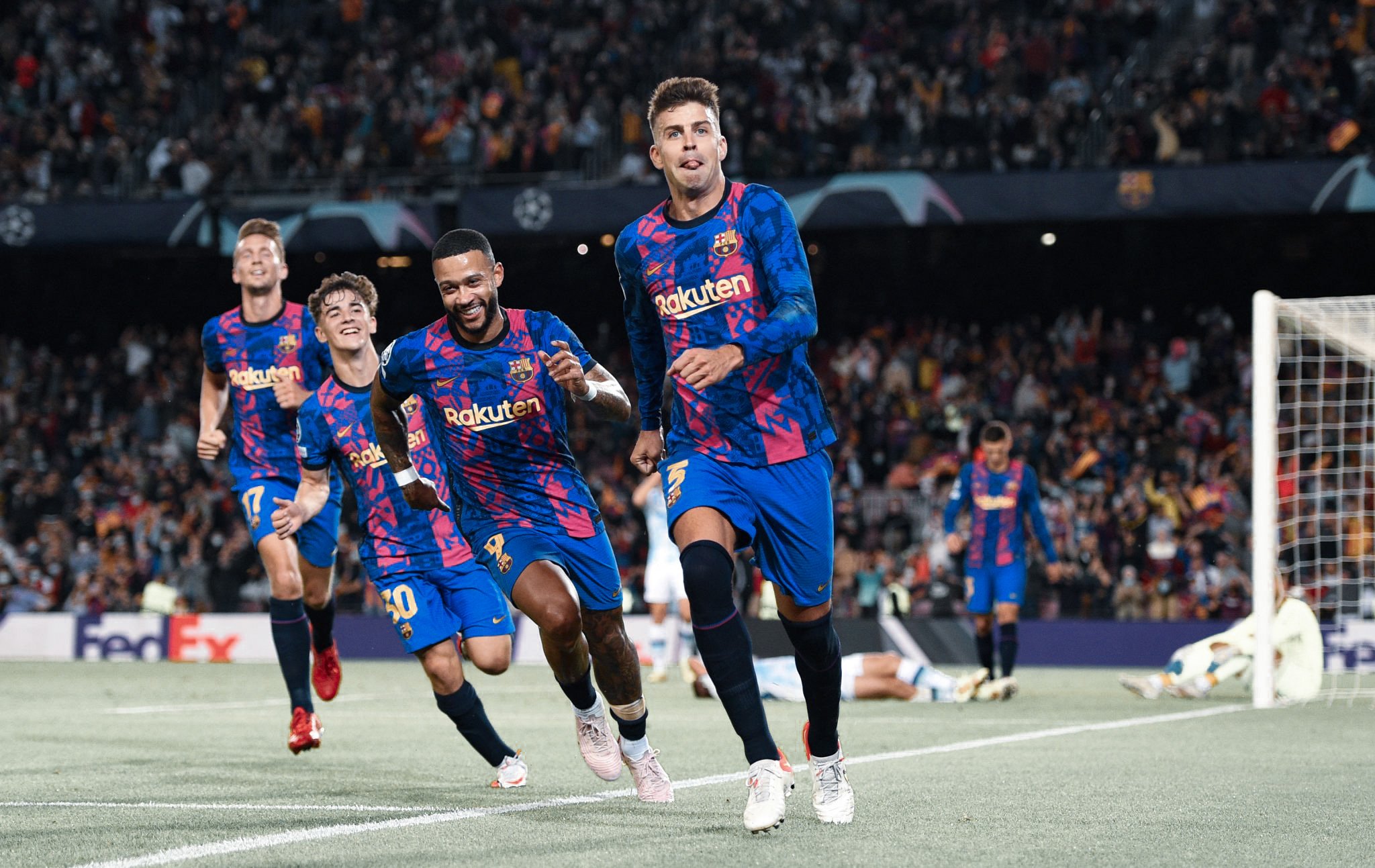 Barcelona registered their first UCL win with a narrow win over Dynamo Kyiv at Camp Nou. The Catalans had a good performance but would have liked to score more to bolster their confidence ahead of the Clasico. Here are the player ratings from the tight encounter.

The German goalkeeper had a relatively quiet night with Barcelona dominating most of the possession in the game. The Barcelona No.1 had no saves to make in the entire first half, a clear indication of the night-off for him. Yet, he did make the occasional important clearance and did not put a foot wrong.

The La Masia youngster started over Sergi Roberto on the night. He covered the right-back position in the first half given Dest’s new role as a winger. Though he did not lose any loose balls, his contribution in the attack was minimal. Nevertheless, Mingueza put up a good defensive performance and never gave the opponents any openings on the right flank.

When Barcelona were looking at Memphis Depay and Luuk de Jong for their first Champions League goal of the season, Pique silently stole the show. The Spaniard was clinical with his finish off Jordi Alba’s assist, and his half volley was too much for Bushchan to handle. Moreover, the World Cup winner was stable and led the defence on the night.

Lenglet’s inclusion was expected given Eric Garcia’s suspension and Ronald Araujo’s injury. The French centre-back put up a stable display, though he did have his moment of panic. His challenge at the hour mark led to a VAR inspection for a possible penalty. Nevertheless, it was not awarded.

The Spanish left-back was an integral part of Koeman’s setup, both in attack and defence. Despite having a relatively quiet half, Alba came back to life with Ansu Fati’s introduction in the second half. Needless to say, he had a direct impact on the game via his perfect assist to Pique for the opening goal.

The Dutch midfielder had a clean performance with a passing accuracy in excess of 90 per cent. Yet, he was not involved in the attack as much as one would have liked. He has little to do defensively, yet struggled to break the lines with his passes. Needless to say, more was expected from the young star.

The veteran midfielder had a good outing with a wonderful defensive display. He held the fort with the centrebacks while also contributing to the attack with his distribution. While ratings can not do justice to his importance, he was a vital part of the side.

Gavi had one of his quieter nights with very little involvement in the attack. The youngster won only two of his eleven ground duels and also lost possession ten times. While he was essential in Barcelona’s ball circulation and possession, he could have played a bigger role in connecting with the forwards.

Sergino Dest was inspired in the first half, causing wave after wave of trouble for the Ukranian side. He completed seven dribbles on the night with a ridiculous 100 per cent completion rate. He missed two big chances, but also created a host of chances. In the second half, the USMNT star moved to right-back where he stayed solid.

Luuk de Jong was one of Barcelona’s worst players on the night with two clear cut chances missed. The Dutch forward had multiple chances to score directly but failed to test the goalkeeper on most occasions. He was replaced by Fati at halftime.

Memphis Depay played 78 minutes on the night before he was replaced by Sergio Aguero. He was a lively force on the left wing with his dribbles being a thorn in the Kyiv defence. He completed five key passes on the night and created two big chances. All in all, a great display from the No.9.

Fati came on in the second half for Luuk de Jong. Immediately after his introduction, Barcelona seemed to threaten the goal a whole lot more. The youngster constantly threatened with his perfect runs into the box, but could not find the back of the net, His biggest chance was an outrageous over-the-head kick which he could not perfectly execute. However, he slowly faded out of the game.

The Brazilian came on at half-time but failed to make any significant impact. He was invisible in defence and barely created any threats in attack.

The Argentine made his UCL debut for Barcelona in the 78th minute but failed to register any shots on goal. A very short cameo that cannot be fairly rated

Roberto came on in the 70th minute but again couldn’t make a significant impact.