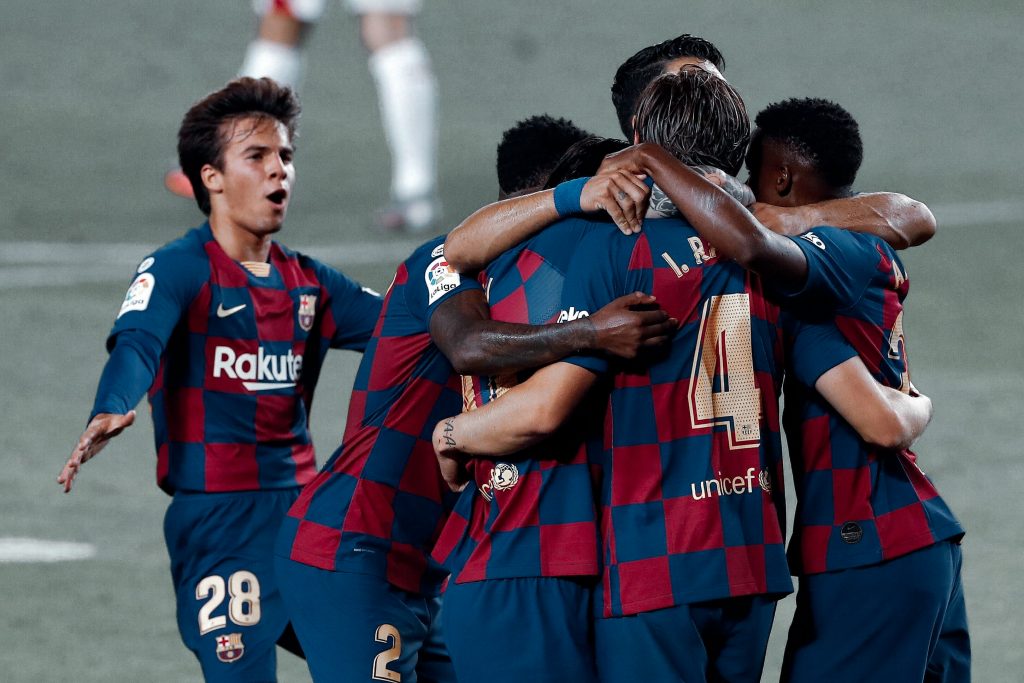 It was not easy, but substitute Iván Rakitić gave Barça a critical second-half win. A match review of the Barcelona 1–0 Athletic Club de Bilbao.

As the referee blew the whistle, it was relief for Barcelona. Or, maybe, the relief had come in the 71st minute, when Iván Rakitić broke the deadlock only six minutes after coming on. Or even the relief could have arrived in the 55th minute, when manager Quique Setién decided to introduce La Masía midfield prospect Riqui Puig. At long last, all culés thought. The time had been long overdue for him to get more than some miserable ten or twenty minutes of action in a substantial La Liga game. But, in a crucial clash and with the game tied at nil-nil, Riqui was subbed on and his impact was immediate.

Fans had been calling for him to be brought in much earlier. Mostly, after a dull first half in which the ball circulation had been sluggish and there had been a worrying inability to intimidate Unai Simón’s goal. With Luis Suárez and Antoine Griezmann partnering up with Lionel Messi upfront, the lack of threat out wide was obvious. And this, considering Athletic Club’s dense central organisation, possibly was not a good option for the blaugranas. For Griezmann, what will never change is his desire to work. But, unfortunately, what doesn’t seem to change either is him making interesting off-ball movements but never being found by his teammates despite being in a more advantageous position than them on many occasions.

Luis Suárez, on the other hand, got another start after completing the full 90 minutes against Sevilla, but maybe rest was more needed for the Uruguayan after a long period of time injured. From midfield, the battle seemed to be between veteran and ever-present Sergio Busquets and Athletic Club’s gem Oihan Sancet. Long legs but a lot of quality in their boots. However, by Busquets’ side, the interiors seemed to be contributing very little to the overall play. Arthur Melo, more and more linked with an exit to Juventus, failed to be consistently relevant in what should have been a vital start for him. Meanwhile, the always energetic Arturo Vidal struggled when pressed by Athletic, and his arrivals into the opposing box no longer were as threatening and constant.

With another goalless draw on the scoreboard, it did not look for Barça at the break. The three points were desperately needed after losing the top spot to Real Madrid in the weekend. Something needed to change. For many, the changes were obvious: youth. Despite the high relevance of such duel, sometimes the youngsters can provide the needed spark of imagination. Nevertheless, Quique Setién decided to change nothing at half-time. Instead, he chose to wait for the minutes to go by. Ten later, in the 55th, it was time for Riqui to come on.

Aggressive on and off the ball, proactive, intentional, lively. The positivity, verticality, clarity, vision, technique and situational awareness from Riqui Puig was a breath of fresh air for Barcelona. The rhythm completely changed with him on the field. No longer lethargic, the locals became far more dynamic and purposeful. That said, the team continued to search for the goal, and that’s why Ansu Fati and Iván Rakitić replaced Antoine Griezmann and Sergio Busquets soon after. Their presence, again, was extremely noticeable since the first minute they were subbed on. Ansu enjoyed a big chance at first, but it was Rakitić who, keeping with his extraordinary form after the coronavirus break, found the net.

“We are very happy. The progress is there, but there are always things to improve. What we have to do now is win everything until the end of season”

Acting as the pivot, he awarded himself the freedom to go forward, press, help in recovering the ball and then receive a delicate pass from Lionel Messi to strike the ball past Unai Simón. Relief. Barça couldn’t drop more points, but, thankfully, they didn’t. The Catalans shouldn’t be happy with their performance at all, in spite of a fifth consecutive clean sheet. Even so, wins seem to be what matter the most in this stage of the season, and some lessons can be learned from such fixtures too. Using youth never is a bad option. And substitutes can indeed win you leagues.