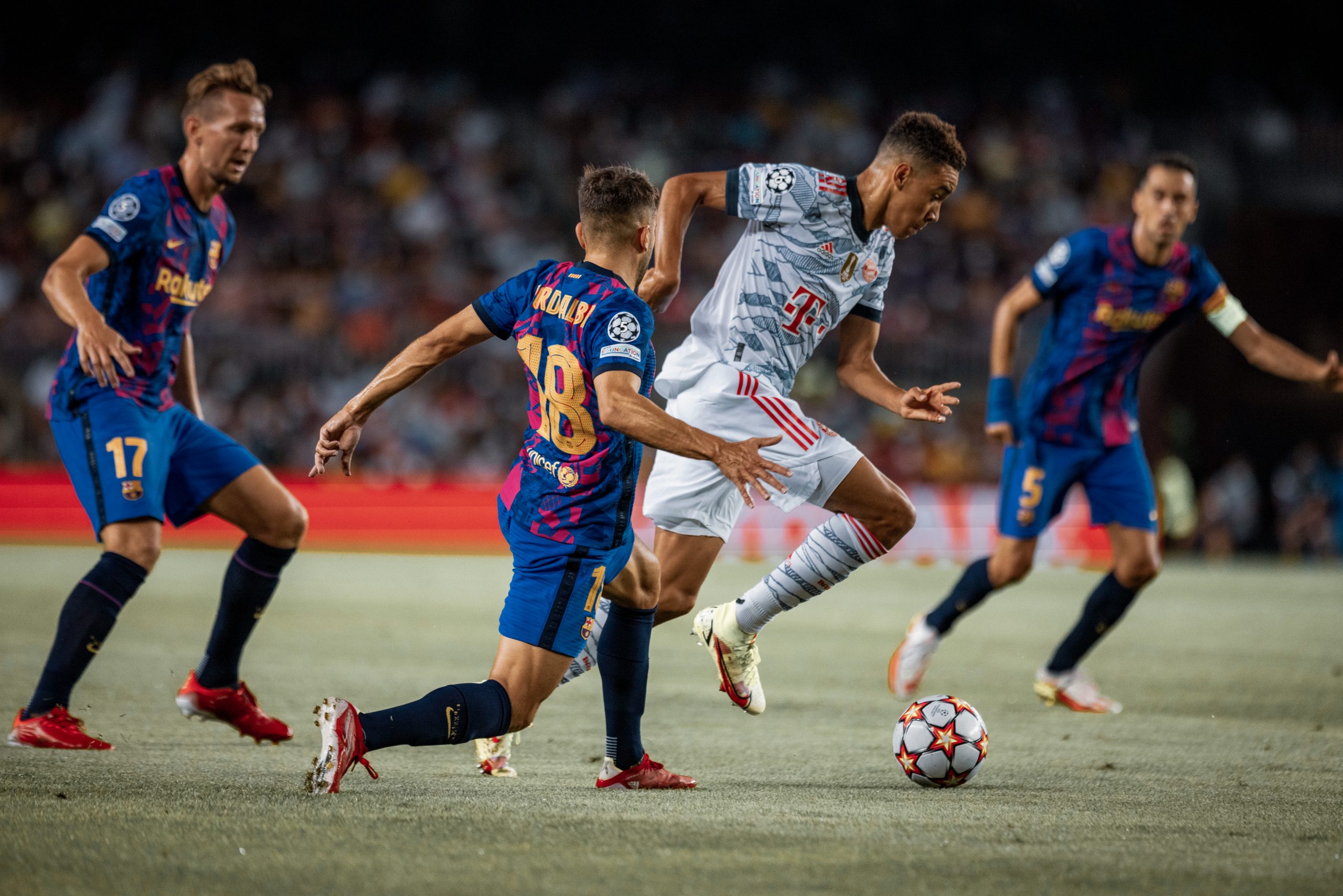 There are many reasons to support a club as we know. For a club like Barcelona, which has established its brand by playing attacking, entertaining football, many fans expect just that. Sometimes, like yesterday, a victory isn’t expected.

What is expected, however, is a team that puts on a show. Due to the poor administration in the past and other factors, it was not possible and not visible against Bayern Munich. In this tactical analysis, we take a look at why Barcelona disappointed and just how much of it was up to tactics.

Ronald Koeman’s Barcelona side has tended to line up in a 4-3-3. However, as the reports indicated, the Dutch manager deployed a 5-3-2 this time around. To an extent, his hand was forced. Injuries to Sergio Aguero, Ansu Fati, Ousmane Dembele meant that the only possible forward options were Luuk de Jong, Memphis Depay, Philippe Coutinho, and Yusuf Demir. Choosing the first two out of these, the frontline was the start of the Blaugrana’s problems.

Coming to the midfield and defence, both were as expected, taking into account injuries to players like Sergino Dest, among others. Barcelona’s usual game plan, the one their identity is built around, was nowhere to be seen, so is it really a surprise that the team had no real identity? The front two were meant to play off each other. Depay would drop back while De Jong would stay forward as an all-out striker.

Taking into account Bayern’s 4-1-4-1 and comparing it to Barcelona’s system, the front two don’t work efficiently, even on paper. Depay is expected to drop back, which leaves Luuk de Jong alone up front, as was the plan. However, he was unable to dominate against Dayot Upamecano aerially. In fact, the French defender would at times be left completely alone to deal with the ex-Sevilla striker, and he did so very well.

As stated earlier, the attack doesn’t work on paper either. Barcelona looked to attack using the wings most often, primarily the left-wing, let’s take an example that demonstrates the same. Whenever the ball went to Jordi Alba, Musiala would immediately press him. Bayern allowed Barcelona the space to get the ball to the full-backs, acting as the pressing trigger. As we see in the zones highlighted in the image below, Barcelona’s players are outnumbered in both.

This leads to Bayern having a good chance of regaining possession in these parts of the pitch. When the Bayern right-back, Benjamin Pavard, moved up the pitch, it allowed Jordi Alba little space to progress with the ball. Getting the ball forward meant Bayern have a 3v2 situation which they won often. Passing laterally led to Frenkie De Jong and Pedri receiving the ball in little space and zero to no forward passing options. This left Barcelona having to switch play very often and having few chances to progress the ball. In the image below, we see how efficiently Bayern did this and made Barcelona dance to their rhythm.

This numerical inferiority is completely normal. You see these in each match. The manager decides where these inferiorities can be acceptable and where they can’t. Jordi Alba would receive the ball high up the field at times, which was the only time Barcelona threatened Bayern. That was because Ronald Koeman chose a system that left the forward in a position of disadvantage unless the full-backs progress. It was a move which showed all the cards Barcelona held. This was a team full of injuries, which was coming into the match with damage minimization in mind.

Personnel and optimisation of personnel

When Jordi Alba did receive the ball, he failed to cross it effectively. Zero long balls accurate out of four attempts and a single successful cross from eight attempts. This was a mistake seen due to the full-back himself and Koeman as well.

Alba’s inability to create space on his own to cross when 1v1 was apparent, whereas the game plan with the narrow frontline meant Alba’s only option to attempt a short pass was Memphis Depay and Pedri. But due to the earlier inferiority, these passes were either not ideal or intercepted.

Koeman’s mistake here was to take into account the fact that Bayern Munich pressed effectively and rapidly. Rather, he left himself no choice but to put Alba in such a position due to the compromise that he chose when fielding the 5-3-2.

Julian Nagelsmann is a manager that specializes in a few key aspects of the game. As a manager, he doesn’t directly control every situation, nor does he believe in micro-managing his players on the pitch. Like any great manager, what he does is put his players in a position where their abilities are best utilized.

This was apparent through Leroy Sane’s positioning. On paper, he started as a winger. His pace and dribbling are a clear threat. However, his decision-making in the final third is questionable at times. This leads to him giving the ball away cheaply, especially while attempting crosses that weren’t possible, even at Manchester City.

Instead, by allowing him the freedom to drop into midfield, Nagelsmann made sure that the numerical inferiority Bayern faced would only be down one wing at a time, which was inconsequential. It also allowed Sane to carry the ball into and out of midfield. As we see in the image above, Alphonso Davies tucked in to offer a passing option as well, which ensured both reliable build-up and attacking threat through Sane.

In the end, Barcelona’s undoing was the circumstances. Tactics can only help so much. That’s not to say Koeman’s tactics were especially suitable for this matchup. He had the option to play it safe and try to get a point, which he chose.

What Koeman should have done earlier, or rather still can do, is experiment more. For example, a system with full-backs tucking in being practised in training or in another match would have at least allowed Barcelona a numerical chance in midfield while providing quick getaway passing options.

There are drawbacks to this as well, but as stated earlier, there is no perfect system. Each tactical plan will have drawbacks. The coach’s job is to choose which drawbacks to settle for. Though it is important to look towards the future, this defeat to Bayern Munich at home in front of the fans was a culmination of many factors which will take a long time to fix.