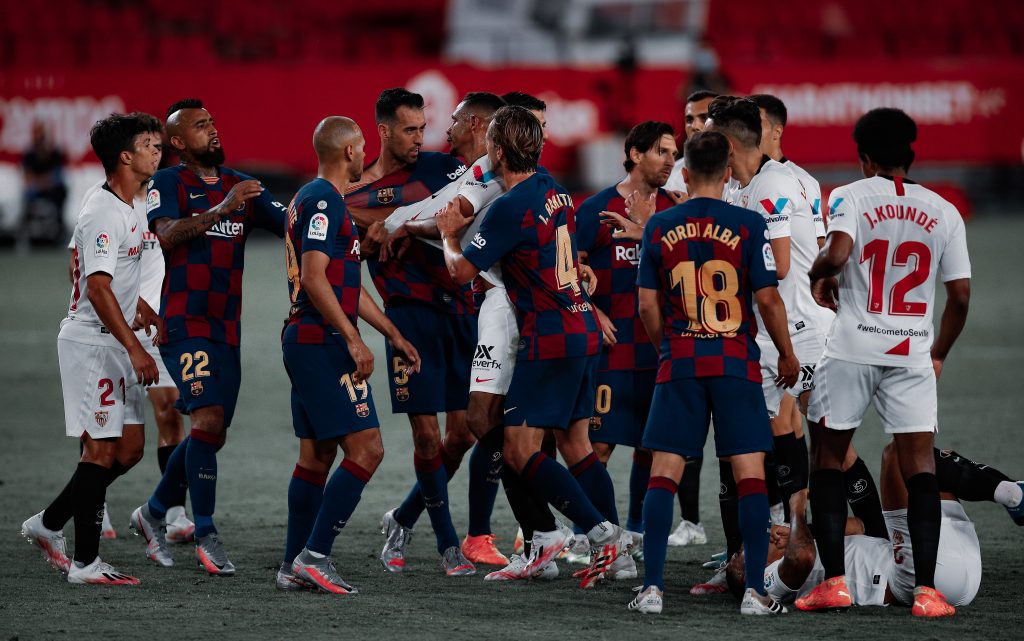 In a critical encounter in one of Spain’s most respected stadiums, Barça dropped two vital points. A match review of the Sevilla 0–0 Barcelona.

Sometimes the words from the protagonists are enough to exemplify a situation. After all, those who live the action tend to have more reasons and arguments than those who watch it from a distance. Conclusions can be drawn, but the sensations from those who are in the eye of the storm already tell far more than any external opinion.

In this sense, few players are as realistic and open when expressing their thoughts than Gerard Piqué. After many mixed feelings from a goalless draw at the Ramón Sánchez Pizjuán, Piqué has made a confession. “Seeing what we have seen in these last two rounds of games, it’s going to be very difficult to win La Liga”. Pessimistic, or realistic? Certainly more realistic than those who just look from the outside. The Catalan, without mincing his words, has been sincere and has expressed that he does not see Real Madrid dropping many points. Now, after two points dropped, it’s Los Blancos who can have the advantage.

In spite of all of this, the opening 30 minutes against Sevilla had been very encouraging for culés. The pressing was highly effective, as so were the mechanisms to get away from the locals’ press and circulate the ball until the final third. Sergio Busquets, stellar once more, was setting the tempo of the game from midfield. Nélson Semedo had a confident display at right-back. And, meanwhile, Luis Suárez and Iván Rakitić seemed to have found their old form again after all the problems they had had in recent months. Suárez, with his hold-up play, and Rakitić, effective on and off the ball, were greatly contributing in making Sevilla look like a much weaker opposition.

The ball circulation was much faster than what had been seen against Leganés on Tuesday. However, in the 30th minute, the cooling break gave Sevilla a chance to breathe. Manager Julen Lopetegui fully benefitted from this opportunity to introduce some slight adjustments and, one minute later, the Nervionenses bridged the gap with Barça. While the Catalans manage to regain control for the later stage of the first half, it was just a hint of what was coming up in the second period.

After half-time, Barcelona’s intensity dropped, and so did its solidity and offensive threat. Despite retaining possession, they could not have the control. As the visitors failed to produce significant chances, Sevilla could set up an efficient counter with just a couple of passes, and with substitute Éver Banega unlocking the blaugranas‘ defence. Barça needed a reaction, but this never seemed to come. Neither did substitutions. For fans, the changes implemented by Quique Setién were too late, and not good enough.

Arthur Melo was introduced for Martin Braithwaite, but the impact was minimal. Antoine Griezmann, surprisingly on the bench from the start, came on for Arturo Vidal later on, but the quality from the Frenchman was not enough to change the result either. At last, 20-year-old midfielder Riqui Puig was brought in to add fresh legs and a fresh mind, but he only enjoyed five insufficient minutes on the pitch. Ansu Fati, goalscorer against Leganés, could not even get playtime off the bench.

Barcelona needed a complete new face, but only three substitutions, rather than the allowed five, were utilised. The azulgranas failed to create clear cut chances in the second period, except for a decent one from Luis Suárez. But Sevilla were not inferior to Barça after the break, and the draw was, at least, fair for both parties.

With a 0–0 in a duel that promised goals, Sevilla can remain in La Liga’s third position while Barça lose two critical points in one of the nine finals that were remaining in the league contest. Real Madrid now have the advantage, three points behind but with a game in hand as they visit Real Sociedad on Sunday. Madrid have a favourable head-to-head record in the race with Barça, who will be hoping for more twists in this unpredictable battle for the domestic trophy.