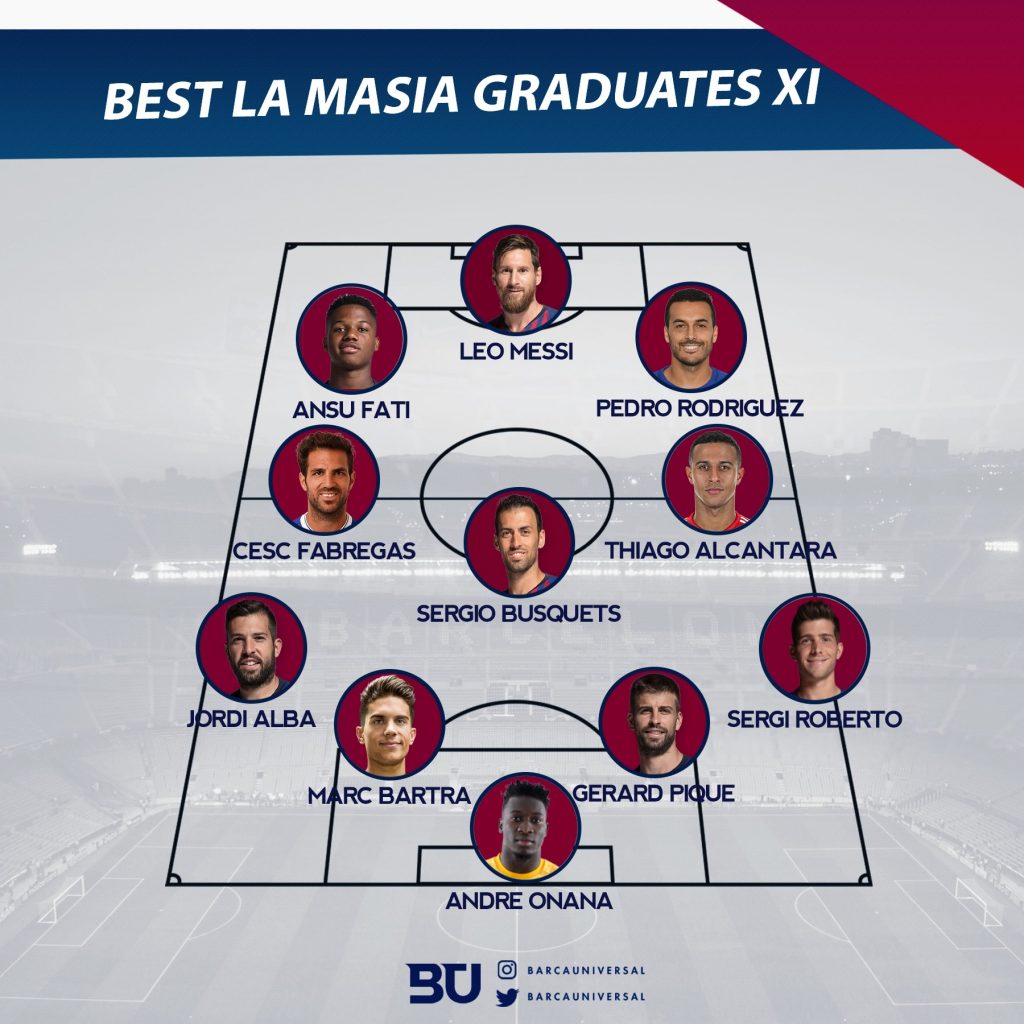 Throughout the years, Barça have developed a handful of youngsters, and some of them are stars in today’s world. Let’s see who are the best La Masia players in their respective positions.

The youngsters’ market has become crazy these days, and clubs are now trying to produce youth players for a profit and not their own squads.

Last decade, teams like Lyon spent hours developing some of the best youngsters in France and Europe only to sell them for a hefty sum in the following summer.

La Masía’s popularity comes from the success their graduates have has in the last decade, playing for the best clubs in Europe and some of them plying their trade for Barça to this day.

An eleven of the current La Masía graduates still playing would prove the fact the academy is one of Europe’s best.

Victor Valdés retiring in 2017 means André Onana is the next best thing in terms of keepers. The Cameroonian international left for Ajax in 2015 and has been their number one ever since Jasper swapped Ajax’s red and white for Barcelona’s blue and red.

He was part of the Ajax side that came back on top of Dutch football and reached the semi-finals of the Champions League in 2019. His performances with his hands and his feet have been outstanding, and it’s clear he’s made in La Masía. The Ajax number one is rumoured to come back at Camp Nou this summer to be Ter Stegen’s deputy.

Piqué is one of the most decorated defenders in history. The La Masía graduate has played a pivotal role in the Culés’ success since returning from Old Trafford in 2008. The Centre-Back is a defender of the highest quality and his ability with his feet complements his game to perfection to make him one of the most complete defenders in world football and has been a regular fixture at the back in the Blaugrana outfit for the past decade. A successful player at all levels, the businessman deserves to be in this eleven.

Marc Bartra never had the most success at Camp Nou but was nothing short of a fan-favourite in the time he spent as a Blaugrana player. The defender is also a complete La Masía product, and his mental attributes are as strong as his physical attributes.

In 2017, before the Monaco quarter-final he was supposed to play with Borussia Dortmund, a terrorist attack sent the current Real Bétis man to the hospital with a wrist injury. He was also a regular fixture in Quique Setién’s exciting Bétis side, finishing sixth in La Liga and achieving Bétis’ first European qualification in years even if the defence was shaky. Bartra is also an automatic addition to this side.

Jordi Alba is another player that left the club early to climb through the ranks to achieve Barça stardom. He left for Valencia in his teenage years and returned to the Camp Nou in 2012 following a superb Euro 2012 display, especially in the final where he netted a goal against Gianluigi Buffon’s Italy. His trophy haul resembles Piqué’s as they have played together for several number of years and they have enjoyed success for Barça and Spain on multiple occasions.

Being Barça’s starting left-back for eight years is hard enough, and Alba has shown great character to stay in the team, developing a friendship with Leo Messi that translates to the pitch, with the two of them fonding each other so many times.

Sergi Roberto is a fan-favourite at Camp Nou, and he has cemented his place as Barcelona’s right back since 2015 and that emphatic 4-0 at the Bernabeu, in which he played a significant part. The midfielder turned defender has been a regular at Barça thanks to his versatility and is now the fourth captain along with Messi, Busquets and Piqué.

His best moment at Barcelona is undoubtedly his goal in the Remontada in 2017 that made him enter the Barcelona hall of fame. Highly rated by Ernesto Valverde, who felt the La Masía graduate was an essential part of his team at Camp Nou, the defender hasn’t had the chance to prove himself under Setién due to injuries but is set to compete with Nelson Semedo for that starting spot.

Sergio Busquets was part of Pep Guardiola’s dream team, and the trio he formed with Xavi and Andrés Iniesta was truly phenomenal. The holding midfielder is capable of winning midfield battles on his own and plays one of the calmest footballs on Earth. One of Setién’s favourite players, he shows his tremendous ability week in week out and never fails to amaze the crowd.

He is another decorated player in the squad, and he never left Barça, much like Sergi Roberto. Now a Blaugrana captain, he shows his leadership on and off the pitch.

Cesc Fabregas was never one of the favourite players at Barça. One of Messi’s best friend, he left his boyhood club for Arsenal in his teenage years and developed a ton under Wenger before returning after the 2010 World Cup.

His first few years at Barça were encouraging, but the fans grew tired of him, and even though he delivered on the pitch more often than not, he was sold in 2014 to Chelsea, instantly making an impact by winning the league twice in 2015 and 2017 before leaving for Monaco. He is a great midfielder and a deserved entry in this side.

Possibly the Culés’ biggest regret, Thiago is an all-round midfielder that has been plying his trade for Bayern ever since Pep stole him from Camp Nou. Despite suffering from injury proneness, much like his brother Rafinha, the Spanish international is highly thought of in world football.In Germany, he has been tearing it up for seven years now and has shown his perfect footwork made in La Masía. Playing for Bayern also means he has filled up his trophy cabinet and he is a decorated individual in this eleven.

Another fan-favourite at Camp Nou, Pedro on his day is a superb left-winger who is lethal in front of goal and accurate with his passes. However, his runs in behind the defence helped the Catalans in so many awkward moments. Always giving his all for the club of his heart, his farewell was more painful as he scored the winner against Sevilla in the European Super Cup before leaving for Stamford Bridge in 2016 after a plethora of awards. He’s one of La Masía brightest players and a return to the Camp Nou is on the cards next summer.

Perhaps the brightest prospect to come through La Masía in recent years, Ansu Fati has got a long way to go to achieve what his predecessors have achieved at Camp Nou. Heavily used this season due to injury, Ansu has shown some bright spots, and his performances have been rewarded with game time. The seventeen-year-old will set the world on fire shortly, and his importance will be palpable at Camp Nou.

There is no doubt here, Leo Messi is not only of the best La Masia players ever; he is Barcelona’s greatest ever, and it’s crazy to think he came through La Masía. The Argentinean suffered from growth hormone deficiency in his early life, and the Culés took a punt on him, allowing him to develop and he has repaid the Catalans by being a genius at what he does.

Now a six-time Ballon d’Or winner, he showed his footballing skills at the highest level by winning uncountable accolades for his side and is now the world’s best player along with Cristiano Ronaldo, arguably.

• Will Philippe Coutinho get another chance at Barcelona?