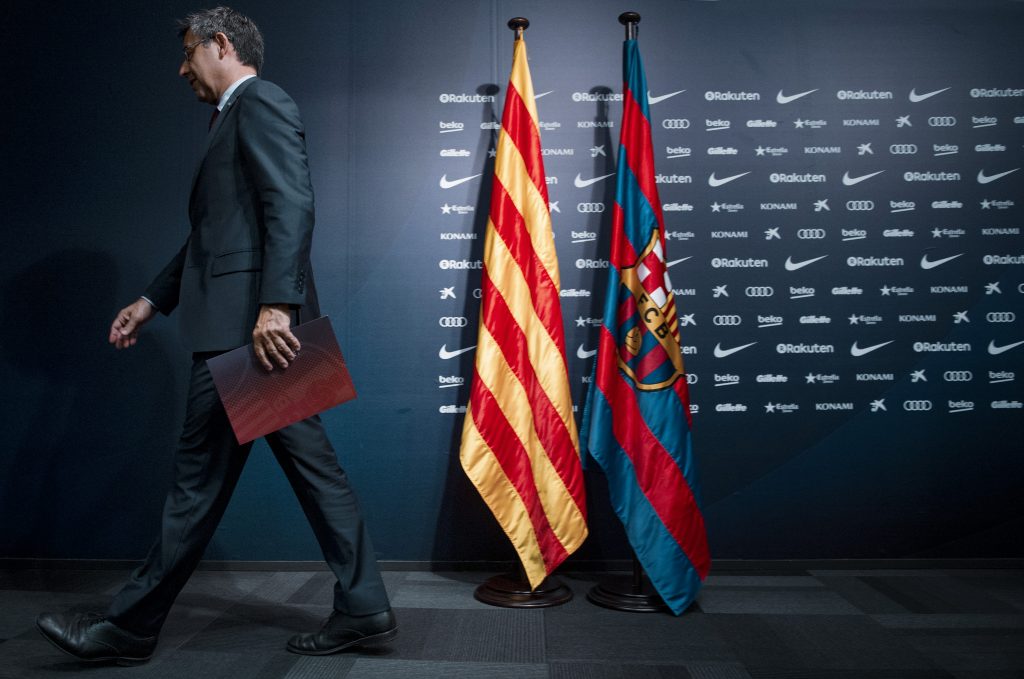 Real Madrid were officially crowned champions on a night where Barcelona lost their unbeaten home streak. The Catalans have been poor and inconsistent for a major part of the season. The problem is rooted far deeper, but it is time for Barça to be self-critical and assess their situation with proper changes.

There couldn’t be a more painful night for the Barcelona faithful. Watching Real Madrid lift the title whilst losing at home to a mid-table Osasuna side on the same night was a hard pill to swallow. As hard as it was to watch, there has not been too much backlash at the result. Madrid might have had several refereeing decisions go their way, but they churned out the results.

Barcelona have been very mediocre, it is not even debatable. It tremendously hurts to say this, but Real Madrid deserved this title over the blaugranas simply because the latter have been poor.

The struggles of the club

Barcelona is in shambles. Physically, mentally, psychologically; the board, the manager, the players; finances, transfers, injuries. The club seem to be in deep trouble from every angle. The fanbase has been silenced in the worst way possible. Watching such mediocre football played week in and week out has rendered them emotionless. So much so that a single dribble from any player other than Lionel Messi becomes a talking point for weeks.

Dropping points doesn’t hurt as much anymore. It has become a routine to expect 75 minutes of dull football with maybe two or three instances of individual brilliance. As the club’s life slowly ebbs away, the life gets sucked out from the fans too. But who can be held responsible for this? The board? The players? The manager?

The board’s reign of terror

It is a known fact that the entire problem stems out from a single seed. The board. President Josep Maria Bartomeu has replaced the spring Blossoms of Barcelona and made it a graveyard. It wouldn’t be wrong to say that Barcelona’s problems off the field are far more serious than those on the field.

The relationship between the board and the players has broken down beyond repair. Lionel Messi has also been quite vocal about the same. Relations have broken down to such an extent where the club captain now threatens to leave his home. And rightfully so. The directive have taken the players for granted. They have run coordinated social media attacks on high-profile stars of the club to hide their own mistakes.

The I3 Ventures scam that was so comfortably denied by the president was beyond shameless. More than €900,000 were spent on this social media monitoring and attacks, to make it appear that players take all the decisions at the club. The firing of Pep Segura, newly-appointed vice president Emili Rousuad and six other board members was yet another smokescreen to cover the reality.

The lack of planning has been impudent. In the January window, the club found itself in dire need of a striker. Not only did they fail to sign one, but the board managed to sell two existing attacking options in La Masía graduates Carles Pérez and Abel Ruiz. With Luis Suárez and Ousmane Dembélé out with long-term injuries, the club found itself in need of an emergency signing.

Since the departure of Neymar Júnior in 2017, only three or four out of 13 new acquisitions have made an impact of any magnitude in the team. Poor scouting and questionable transfer decisions have left a permanent dent. The departure of Arthur Melo in such an outrageous manner, along with the loan of Jean-Clair Todibo and Carles Aleñá, fail to make any sense. Naturally, the biggest cause of concern has to be attributed to the board.

Players have to be more self-critical

Once a player dons the prestigious red and blue colours of Barcelona, he is expected to play and defend that pride with paramount passion. However, as Lionel Messi has said innumerable times, this is not a winning team.

“This game represents the entire year. We have been an erratic and weak team. We have to be critical of how we have played, starting with the players, and the rest of the club”

Lionel Messi
on the disappointing season

To say that the team is mentally fragile is an understatement. They have never recovered from the defeats in the last two seasons of the Champions League. The panic is evident to everyone who watches. The players often look flustered when it comes to holding on to leads. The last ten minutes of every game seem to be agonising. It does not look like a winning or confident team on any measure. It was a similar panic that cost the team the Copa del Rey and the Spanish Super Cup this campaign. Not to mention that the match against Osasuna followed the same blueprint.

“Roma, Liverpool…the fans are running out of patience because we are not giving them anything. If we want to fight for the Champions League, a lot has to change. Like this, we will lose to Napoli”

Lionel Messi
after the defeat to Osasuna

With unplanned contract extensions and enormous salaries to even squad players, the situation is not very great. The club can’t seem to figure out an exit formula for any footballer, because of the large wage bills and long contracts. Confusion at the administrative level has had its effects on individual performance too.

Every time the Catalans walk out on the field, they are far too predictable. It is a known fact that they can not break open a low block, and opponents exploit this. Whenever it appears that they might have found the trick, another disappointing performance follows. With the existing inconsistency, it is high time to buckle up and reassess the situation before it is too late.

Coach Quique Setién has come under heavy scrutiny after the sudden collapse in the title race. While there have been larger factors operating outside his circuit, he hasn’t largely helped himself either. It is no secret that he has been unable to exploit Messi‘s prowess in front of goal. The line-ups are often confusing, and substitution feels quite late at times. The team seems to lose steam very quickly.

“I agree with some things that Messi said. We need to be self-critical and improve”

Quique Setién
after the defeat to Osasuna

The azulgranas boast of more possession on paper but struggle to break down defences. The goal conversion rate has seen a rather steep fall since his appointment too. A trophyless season is never received well, and he finds himself at the receiving end of heavy criticism. His decision to ostracise Arthur from games after his transfer is baffling, given how Barça’s future Miralem Pjanić continues to drop masterclasses for Juventus.

“Will I be the coach for the Champions League? I hope so, but I don’t know”

There have been positives, like the rise of Ansu Fati and Riqui Puig, but is that enough for him to keep his place? With RAC1 already reporting that he has overseen his last game as manager at the Camp Nou, it looks to be a question of when rather than if.

The state of Barcelona at present is a pitiable sight. Burning out Messi’s final years as a player because of administrative tensions is devastating. It is a fact that the team has been miserable, but the board has been even worse. Now is the time to buckle up and introspect.

It would appear that starting from scratch would be the best option. Elections are the only event that can prevent the collapse of this club. A rather difficult Champions League stares Barcelona in the eye. Unless there is a major turnaround by the players, it will be a long dark couple of months up ahead.