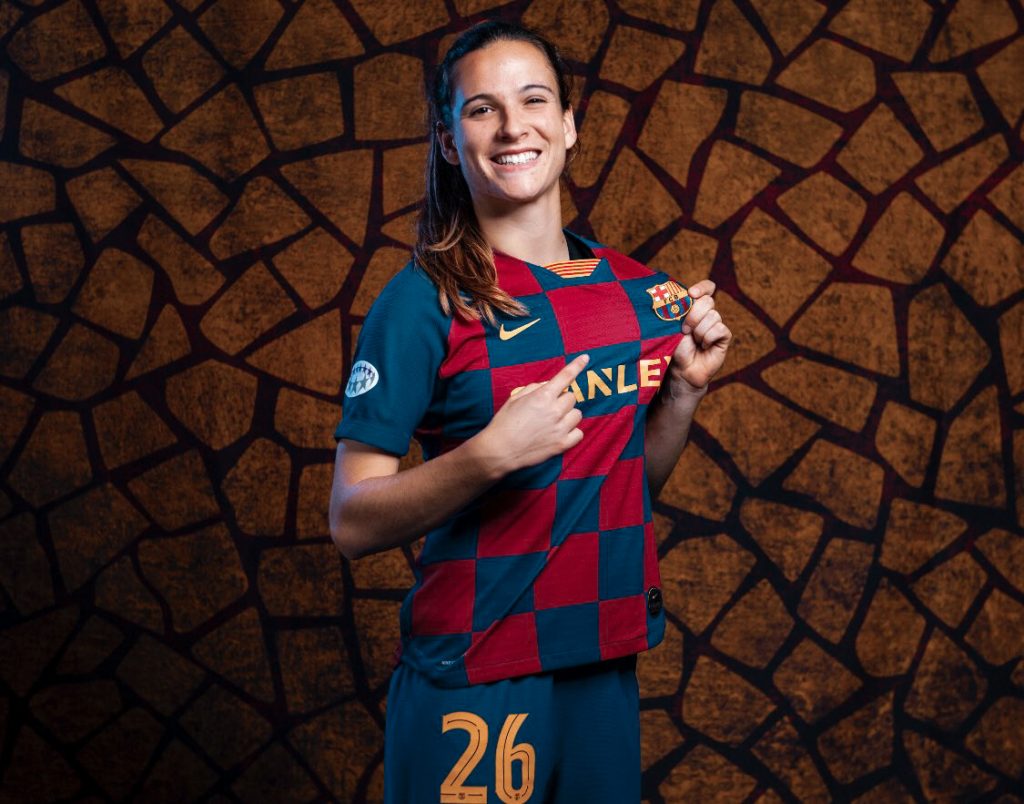 Captain and leader, 20-year-old defender Laia Codina has been been growing in leaps and bounds since joining La Masía and will undoubtedly leave her mark in the first team of Barça Femení one day. In this article we provide an in-depth review of her trajectory, playing style and ceiling.

FC Barcelona Femení’s most recent generation of youth team graduates have garnered a lot of attention for their attacking firepower, but La Masía has also provided much-needed defensive security for the club’s senior side.

Due to injuries or lack of defensive depth, first team manager Lluís Cortés has chosen to rely on the versatility and confidence of promising centre-back Laia Codina Panedas. At 20 years of age, she has been the perfect substitute for the setbacks caused by injuries this season, completing five games with the senior team. Codina is yet another addition to the list of players whose quality stands out from the Barça quarry.

Codina started playing football at the age of 4 for UD Cassà, a club located in the city of Cassà de la Selva in the province of Girona, northern Catalonia. At UD Cassà she briefly played in mixed boys and girls teams, which helped her become a more versatile player. She typically started in midfield but moved to the centre-back position when Arnau Comas, the current Barça B men’s player, was in midfield.

As she grew up at the club, she would play in midfield, in the centre of defence or on the wing, depending on the game. She played at Cassà for 10 years before eventually moving onto FC Barcelona. At the end of her tenure at UD Cassà, she received a plaque from the club thanking her for her hard work and dedication to the organisation.

She was already in her last year with children at Cassà when she looked for a way to continue playing football. She received an email at the end of November 2014, when Barça offered her an opportunity to train for two days at their facilities: December 3 and 10. In January 2015, the club asked her to continue her playing career with the cadet-juvenil section.

“I think I was not aware, because I am also a culé since I was little, I have been a member since I was 8 years old. I don’t miss a game, I cry when Barça loses a final, but I think my mother, and my family in general, was more aware than I was. It was a bit: “well, I’m going to Barça to see what happens”. That it is the club of my dreams, but I was not as aware as my father or mother”

Laia wasted no time in establishing herself at the club as a player who is versatile in any position of defence. Her arrival in the 2015/16 season provided the cadet-juvenil section with much-needed qualities beyond her young age.

In football, nothing is presented easily, but it has to be earned. At Barça, Laia has learned what real football is, and what’s natural to her. In the end, she has perfectly fit into Barça’s style. Additionally, she has the values ​​of humility, which is a very important trait to have when you play for the blaugranas. Whenever she gets into the pitch with her teammates from Barça Femení B, she never misses to high-five them before the start of the match.

With that in mind, it should come as no surprise that her main reference is Barcelona legendary centre-back Carles Puyol, one of the most respected figures in football for his leadership abilities and humanity.

“Puyol. I identify very much, because he is someone who has the colours of Barça in his heart, he also carries the fight as something internal, in the blood, and he has given everything in every game. If something had to be broken, he would break it. I’m quite similar in that regard. I am not afraid and to achieve a goal I would do anything”

Laia Codina
on her reference

Her reward for her hard work and the recognition of her emerging quality came with a first team contract at the end of the current season. After making herself an indisputable piece in the ranks of Barça Femení B, Laia Codina will start the next campaign under the command of Lluís Cortés with the first team. The Catalan defender will hopefully transition well into her new role as a senior footballer and grow consistency through FCB Femení.

Step by step with her feet, she begins to draw a path in which she will undoubtedly end up leaving her mark. At the moment she is on the right track: on October 13, she made her debut in Primera Iberdrola, and just four days later, she debuted in the UEFA Women’s Champions League against FK Minsk.

Laia Codina on her role as a captain for FC Barcelona

“A lot of responsibility. When the Catalans think of a captain we think of Xavi, Puyol or Vicky Losada, who are people who have been here for many years, who feel the colours of the club, who you see they do it with great responsibility, with great pride. I tried the same thing in some way. I loved it when they told me I would be a captain, but I assumed it normally, and in the end it is not a big deal. If they give it to you it is for something. Keep doing the same thing you did the year before, and that’s what I did”.

During her early days, when she was playing for the Catalan U–12 team, Laia Codina had a terrible time as she was a very nervous person, had a lot of anxiety and had to attend to specialists to overcome her struggles. She suffered the same during her first year with the Cadet, because of the pressure of playing for a club like Barcelona.

She spent three or four years going to a specialist, which improved her mental health during her second / third year in Barcelona. She started to grow from there and those years of anxiety and fear have now been eased to make way for her becoming the fearless leader that she is today.

Relentless from behind, Laia Codina is immersed in one of the sweetest moments of her career. Rocked in the legendary generation of 2000, the Girona-born player will proudly defend the first team next season. Laia has led a season of memorable performances with Barça Femení B to guide the squad towards a third-place finish in the Reto Iberdrola, the second tier of Spanish women’s football.

Strengthening her authority as a central player, Laia returned to anoint herself in Jordi Ventura’s side as a key piece. Despite not being able to win the league, the third place in the group helped Barça Femení B remain in the Reto Iberdrola with good position to improve for the next campaign while bringing in more youth talents.

In June 2020, Laia renewed her contract at FC Barcelona for two more years, rightfully promoting her to the first team dynamics from the 2020/21 term.

“I am very happy to announce my renewal and to continue defending this shield for two more seasons as I have done so far. I want to thank this team for the trust and the opportunity to continue enjoying and growing as a footballer”

Laia Codina
on renewing for Barcelona

Awarded in 2018 as one of the young prospects of Girona football, Laia will now try to provide the senior side with quality. Qualified with exemplary skills, the influence of central figures such as Mapi León and Andrea Pereira or the seniority of Melanie Serrano will be an essential aid in the progression of Laia, one of the most outstanding talents coming through La Masía.

Quick to move and cover the pitch with impeccable speed to suppress the attack, the Barça central defender counts the days until she has a true opportunity to demonstrate her potential in the first team. The Estadi Johan Cruyff is already beckoning her presence.