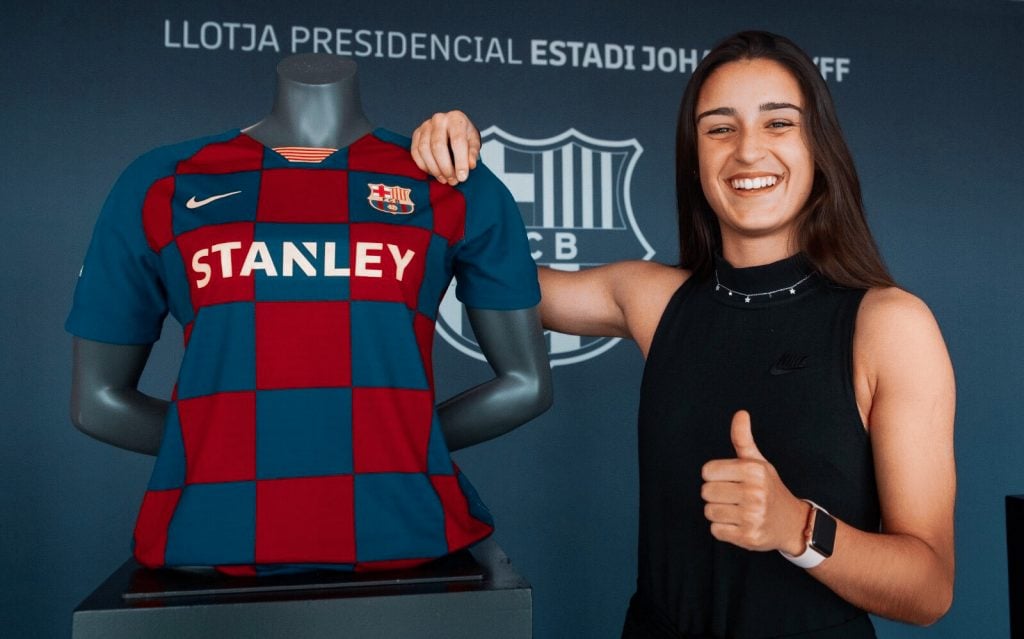 Predominantly a full-back, 18-year-old Jana Fernández has been gaining much attention in recent times and is set to have a bright future at Barça Femení. We analyse her short career so far, style as a player and potential.

FC Barcelona is known all over the world for the success achieved by its talents raised at home. Cantera is the term used to identify the youth sections of Spanish clubs, Barcelona’s in particular being named the iconic La Masía. The four girl’s youth teams at FC Barcelona’s academy are some of the best in the world for women’s youth development. Older, more established senior players like Vicky Losada and Leila Ouahabi spent their time with the youth teams in the late 2000s and early 2010s. More recently, Patri Guijarro and Aitana Bonmatí, who are both twenty-two years of age, are already a part of the first team and regulars for the Spain women’s national team.

This current group of B-team players could be the best the club has ever seen. There is first-team level talent at nearly every position. That being said, there has been a lot of talk about the possibility of a return to Barcelona from 21-year-old full-back Ona Batllé, a La Masía player during six years until 2017 and that has announced that she will be leaving Levante this season.

Batllé has clear talent and her signing would be major for Barcelona’s defensive issues, but amongst all the talk, the talent of current B-team full-back Jana Fernández Velasco has flown under the radar. Days ago, the 18-year-old Catalan who has progressed through the sections of La Masía finally signed her first professional contract for the club, a sign of better things to come for the future of homegrown talent at FC Barcelona.

Born on 18 February 2002 in Catalonia, Jana Fernández’s passion for this sport started very early, at the age of six she was already playing in the club of her town, Sant Esteve Sesrovires. She was asked at the age of six to choose between jazz and football – she made her choice without looking back.

Her evolution led her to be picked up by FC Barcelona, ​​where she played in the youth-cadet category as a defender under Kiko Meléndez and Irene del Rio in the 2014/15 term. She humbly grew as a player and, since arriving at the club, she has constantly exceeded expectations.

Jana has been growing with Spain’s youth national teams for years. For the Spanish youth teams she has been put in the centre-back position, but when she became a B-team regular in 2017 she was given more freedom to be in her natural position as a right-back.

Her first experience with Spain came with the U–17s in 2017, when she was fifteen years old. A year after her debut, she played a role in the Spanish team who won the 2018 UEFA Women’s Under–17 Championship, the fourth Spanish side to do so. Her talent, maturity as a player and leadership qualities didn’t go unnoticed by the senior club staff, and she was invited to the United States for preseason with the Barcelona senior squad some months later. Her first team debut happened not soon after at the 2018 Copa Catalunya, which was also her first title with the senior squad.

In December of the same year, she joined Barcelona teammate Claudia Pina in Uruguay, where they both helped Spain to glory as the first ever Spanish squad to win any women’s youth World Cup. When Jana went to the Camp Nou with her father as a child, she could have never have imagined that she would become a world champion and be honoured for her achievement in the same stadium.

She said the following when interviewed by Ellas Son Fútbol after ending the preseason in the United States: “I felt emotion. I have always been very culé. When I was little I would see Alexia [Putellas] and others play, and I was very excited. And, obviously, to take the first step in a country like the USA with all my idols…crazy, of course, a dream fulfilled. It makes you nervous, but I was also really motivated and excited. That didn’t stop me from enjoying it 100% like I did. Training next to Alexia Putellas or Mapi impacts you. Logically there is a difference with the B, especially in the intensity, because at Barça we work the same details of the game, but the intensity is much higher”.

When she was asked about what could she bring to the team, she answered: “I can bring youth, desire and enthusiasm, the illusion that we little girls have to take this great leap. In the field, speed. I come from Barça, where they teach you a lot of tactics, to treat the ball well (tiki-taka). Off the field, we all contribute to something that makes us a great team”.

Jana’s commitment to the club

It’s never an easy task to succeed at Barcelona. It requires a lot of determination, commitment and hard work through your time at the club, especially if you are coming through the ranks of La Masía. We have seen quite a lot of players, both men and women, opting out of La Masía and pursuing their careers elsewhere when they can’t find minutes with the senior team. Players like Ona Batllé, Laia Aleixandri and Berta Pujadas in 2017, and Helena Barco, Paula Gutiérrez and Aida Esteve this summer, all took this route.

Only a few have both the quality and loyalty to get into the first team in their early years, and players like Aitana Bonmati, Melanie Serrano and Vicky Losada are all examples of it. As for Jana, she has the right attitude and strong mentality to showcase it for Barça Femeni’s senior side.

“I am a very demanding person, very hard-working and I don’t stop until I get what I want. I am not conformist and every day I try to push myself to the limit. For example, I’m right-footed, but I try to work the left a lot in order to achieve a balance and become more complete as a player”

Throughout her career so far, she has been known for her hard work, sacrifice and a constant drive to better herself. She will never back down from a challenge. Even though she didn’t get any extended opportunities to play for the first team this past season, she believed in herself. Players tend to feel hard done when they never have chances to play at the highest level. They tend to look for opportunities elsewhere. That’s not the case for Jana Fernández: she stuck with the club she loved and she believed she will succeed soon. That belief is what brought her to sign her first professional contract with FC Barcelona Femení.

“I started and continued in football because I really enjoy it. It was a way to forget about everything else, to enjoy, and to grow. I was lucky that I was good at it and that has given me more opportunities, but if I didn’t enjoy it, I wouldn’t continue”

Jana treats her teammates like her family. She believes that strong bonds created within the team and the emotions experienced in the field make her connected to them.

“As you enjoy yourself, you achieve milestones and objectives that you had not previously set for yourself”

On July 21, 2018, Jana Fernández received the award for Best Athlete of Sant Esteve Sesrovires in the Sports Night Awards, which are held every year to recognise the most outstanding athletes in her town.

After her success at the U–17 World Cup, she got her first call-up for the first team squad. She made her official debut for Barcelona Femení when she was substituted in at the 58th minute during their 7–0 win against Madrid CFF. Furthermore, Jana Fernández and Claudia Pina were invited to watch the Barça men’s match against Tottenham in the Champions League and were honoured at Camp Nou at half-time for winning the U–17 World Cup. In fact, they were the first women’s players from La Masía to win a youth category world championship.

Jana Fernández is known for her attacking play, pace, stamina and technical skills. She plays a significant role in linking up with the forwards as part of the team’s attacking play. The team relies upon Jana to track back and tackle successfully at the back on any counter-attack by the opposition team. This allows the midfield players and forwards to play high up the pitch, rounding out the counter-pressing strategy for Barcelona Femení B.

The position that highlights Jana’s skills in this season for Barça B is both her natural full-back position and a more advanced winger position. She covers the back in the defensive phase, often spreading out onto the right wing where Pina or Bruna Vilamala become the perfect finishers for her short passes in the final third. At times, Jana sends the ball to the wing, gets inside to the middle, and helps with the play in the centre.

A week ago Jana Fernández signed her contract renewal with Barcelona for three more seasons, as well as assuring that she will be in the first team dynamics next course

She is versatile defensively as well and can play both as a centre-back and as a full-back. The important aspect that we admire noticing these young players is their adaptability to operate in different positions. For example, Candela Andújar can play as a right winger in attack and can also be deployed as a full-back. Attacker Claudia Pina can be utilised as a playmaker, while Patri Guijarro can be put in any position of the pitch.

This is the reason why Barcelona are counting on the La Masía products, as they know the system and they know the roles in each position. To play for Barça, players need to be aware of the movements of the teammates and the tactical adaptability to switch positions during the course of the game. Jana Fernández is a player who excels with this understanding of Barça’s playing style and can become a great full-back if she has patience and determination to succeed at the Catalan club.

Humility, love for football, enjoyment, perseverance, effort and, of course, talent: this is how the story of a true champion is forged. That’s how Jana Fernández made a name for herself in the youth categories of Spain and Barcelona. She was rewarded for these qualities with a professional contract to play for FC Barcelona.

“We must continue working and continue learning. I take it with great enthusiasm. I hope we achieve a lot of success, that we fight for everything and that we are very lucky”

Jana Fernández
on her contract extension

The current group of players in Claudia Pina, Jana, Carla Armengol and Laia Codina are just four of the many young blaugrana promises. Barcç are stamping their authority on the importance of renewing players from La Masía this season. Pina, Codina, Candela, Gemma Font and Armengol all renewed their contracts, and soon after came the much-anticipated extensions of Jana and Bruna Vilamala.

Barça continues with the strategic framework of giving continuity to those players from the lower categories with high potential. With Barcelona having a hold on elite young gems like Bruna Vilamala, Jana Fernández, Ariadna Mingueza, Noah Bezis and Laura Coronado, the future of La Masía again looks bright for Barcelona.