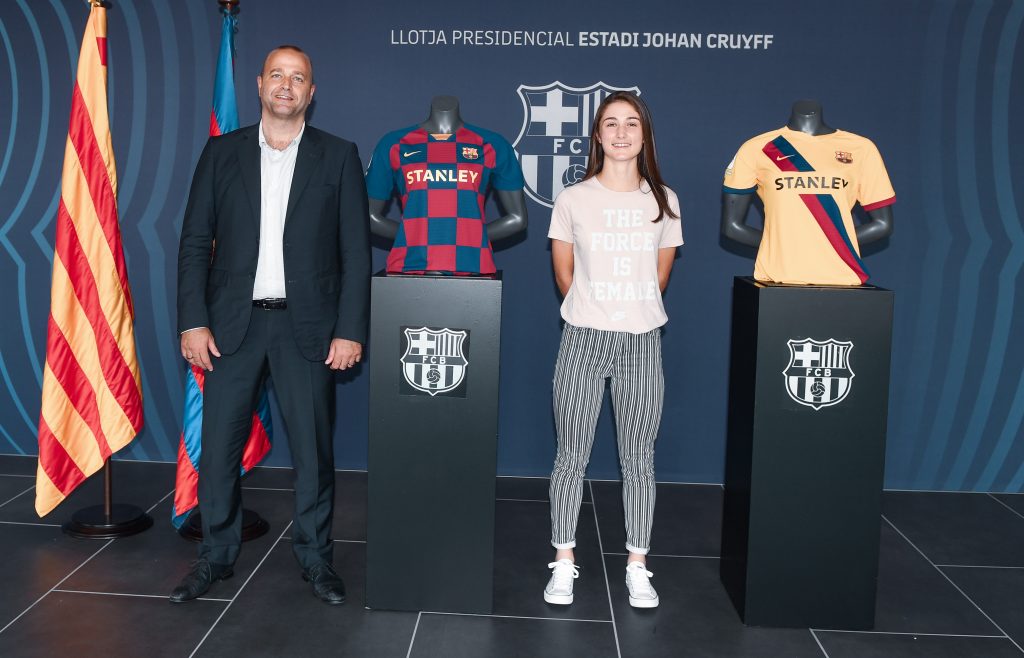 Barça B forward Bruna Vilamala became this season the fourth youngest debutant in the history of the Femení, and she recently signed her first professional contract too. We analyse her trajectory so far, playing style and what’s to come for her.

On 1 February 2020, 17-year-old forward Bruna Vilamala got her first taste of the Estadi Johan Cruyff when she debuted against Sevilla for Barça Femení’s senior team. Seeing a La Masía graduate debuting for the first team has always been a proud and special moment for Barça fans, especially in such a poetic way of entering the pitch for an icon like Lieke Martens.

When watching her matches with the B team, there are clear glimpses of her talent and potential. Bruna knows has what it means to play the Barcelona way with the Barça DNA.

The young debutant is an integral part of the FC Barcelona Femení B squad who ended third-place in this year’s Segunda Division. In the previous season with the Juvenil, Bruna suffered a very serious injury that kept her away from the playing fields for much of the season. Now that she has recovered from it, she has been able to return to her best form.

After an injury last campaign, her excellent 19/20 term has allowed Bruna Vilamala to debut with the first team

Bruna Vilamala is a versatile forward who can play across the pitch as a winger and striker. She is often deployed on the flanks for Spain’s U–17 and Barcelona B due to her exceptional dribbling abilities. An outstanding stat of her dribbling ability is that she completed five successful dribbles out of five against England’s U–17 in the 2018 UEFA Women’s U–17 Championship.

One of the most admirable qualities of Vilamala is her understanding of the movements of her attacking partners. Barcelona Femení B had been playing brilliantly last season due to the understanding between the teams’ forwards. Claudia Pina dropping deep, moving laterally and dragging defenders out of position has been essential in creating space for Carla Armengol and Bruna Vilamala. This chemistry with Pina has allowed Bruna to shine more in the final third. Bruna pressing high up the pitch and unselfish link-up play are what made Barcelona B the highest-scoring team in Reto Iberdrola.

At the 23rd minute, there was a series of intricate passing between Pina, Bruna and Aida Esteve which ended up in a goal. It started with a pass from Sheila to Aida. Aida passed the ball to Pina, and a skillful backheel from Pina put the ball in Bruna’s path, who passed it to Aida. Aida sensed the space behind the defense and flicked the ball over the defenders for Bruna to bury it. The on-rushing goalkeeper stopped Bruna from getting a shot, but Bruna set up a pass for Carla Armengol who in turn nestled it into the back of the net. You can see the passage of play leading to the goal in the screenshots below.

Two minutes after scoring the goal, Bruna Vilamala designed another goal-scoring opportunity. She received the ball and sent a disguised back pass to Aida, who directed the ball back to Bruna, opening up the defence. She spotted Claudia Pina running behind the defence and duly sent a through ball to finish it off. Unfortunately, it had too much pace and ended at the feet of the approaching keeper.

This was another example of how she can orchestrate build-up play by creating goal-scoring chances with key passes. Her movement without the ball shows how she is mature beyond her age. She fits into the Barcelona system well and can be decisive in the final third. You can see her playmaking skill in the below screenshots.

Her work rate and impeccable pressing in the opposite half are other valuable traits of her game. She is often used as a winger since she has pace and dribbling abilities in one-on-one situations and when leading counter-attacks.

Barça’s match against Sevilla served to write another page in the history book of the FC Barcelona. She entered the last moments of the duel against the Andalusian team, with the result already decided. The Borgonyà-born footballer replaced Lieke Martens to a resounding reception in front of the blaugrana faithful and completed her debut with the first team under Lluís Cortés. In her debut, Vilamala was added to an elite list of La Masia players who have made the long-awaited jump to the senior team.

“It’s what I’ve dreamed of since I was little”

The Barça forward appeared in front of the media after the match against Sevilla to analyse what had been her official debut with FC Barcelona: “I am very grateful, I still don’t believe it”. She also wanted to place special emphasis on the reaction of culés every time the youth player touched the ball: “When I saw the response from the fans, I got goosebumps. It’s what I’ve dreamed of since I was little”.

The good news do not end for Bruna, as the young Barça star signed her first professional contract for Barcelona on 26 June 2020, extending his spell at the club for three more seasons.

“It is a dream for me that the club has given me this opportunity. It is a dream that I have had since I arrived and that it can be fulfilled makes me especially excited”

With Bruna Vilamala extending her contract until 2023, she will enter the first team dynamics next year with the expectation of being a regular starter for Barcelona in the future. It’s hoped by most of the Barcelona faithful that she can learn and develop like her predecessors and becomes a fundamental part of the first team in the years to come.

This season under Lluís Cortés she has one appearance off the bench where she impressed the tactician, but he has since stated that he wants to see more from her and her B team teammates in the future. These renewals for Barça B players like Bruna Vilamala are a clear statement from FC Barcelona to the European giants of what is coming up from the La Masía project.