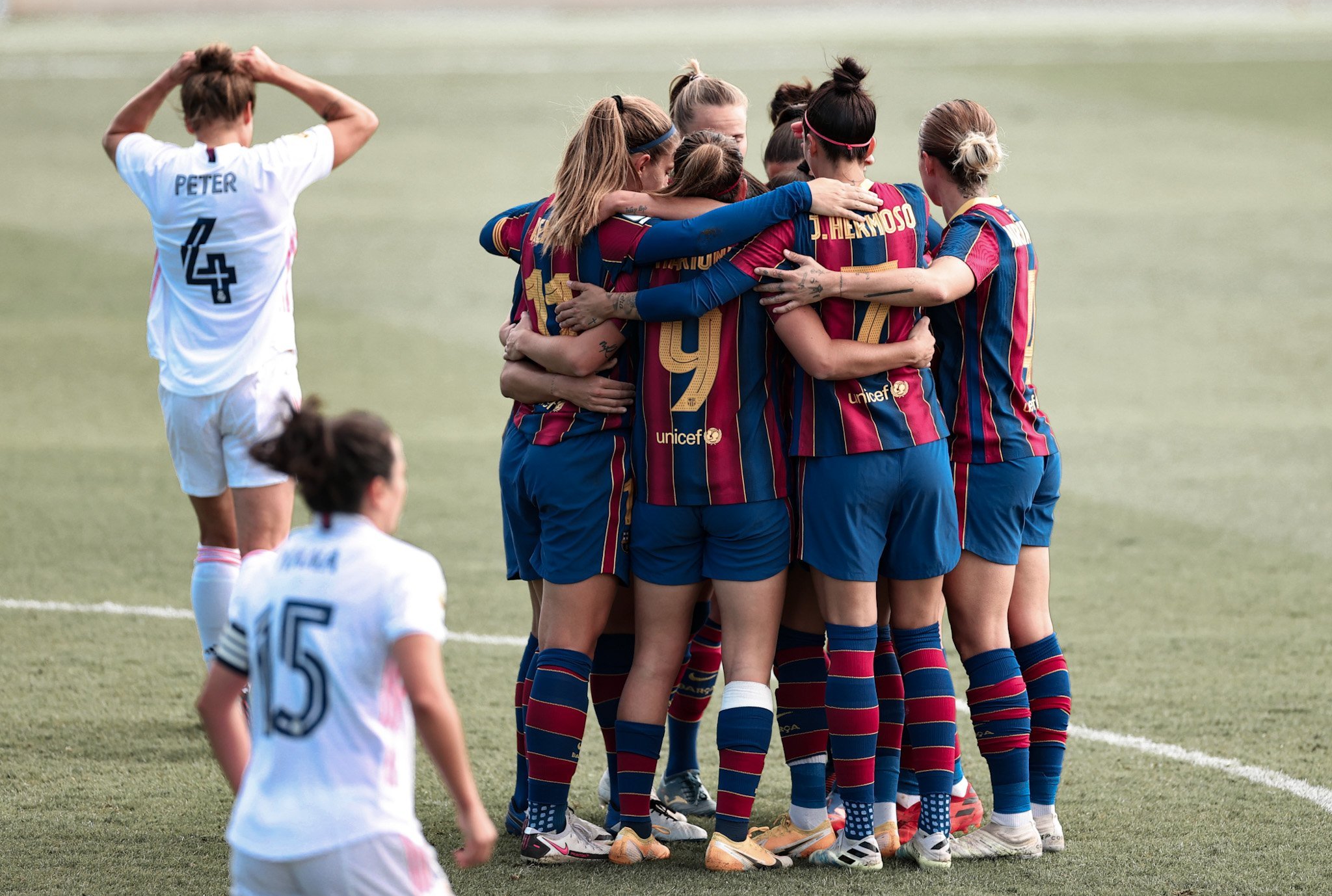 Barça Femení kicked off the 2020/21 season on a high note, beating new rivals Real Madrid by 0–4 away from home, but in this preview, we look at the bigger picture and what there’s to expect from this campaign.

This summer has been a turbulent one for women’s football in Spain. After the RFEF suspended all 2019/20 non-professional football campaigns, it has been up in the air when the 2020/21 season would start, whether or not groups would be a factor, or if there would even be another league match played in the year 2020. Fortunately, last month, the RFEF was somehow competent enough to decide on a start date without having to separate the league in the groups, and the Primera Iberdrola and other competitions – like the still-unfinished 2019-20 Copa de la Reina – will finally make their return this week.

After their unprecedented success last season in Spain’s domestic competitions, Barça Femení enter this season with the same expectations as last year: that they will become the best team in Europe. We will look into how this team has changed since the previous season, what their new goals are, some players to look out for, and how they will approach the long season ahead.

Barcelona has had a very minimal transfer season, especially compared to other big teams in the league. For the most part, the team will continue with the same group of players with whom they went undefeated in the league and reached the Champions League semi-final.

Two players, Pamela Tajonar and Stefanie van der Gragt, left the team at the end of the season to go to EdF Logroño and Ajax, respectively. On the other hand, the club picked up 17-year-old Gio Queiroz from Madrid CFF B to play for Barcelona’s B team. They also introduced 19-year-old Spanish keeper Cata Coll into the squad after her successful loan spell at Sevilla, where she will be joining the team for the first time after being transferred in from UD Collerense in 2019.

Instead of signing any new first-team players, the club opted to promote and extend the contracts of multiple promising Barcelona B talents, including Laia Codina, Jana Fernández, Bruna Vilamala, Clàudia Pina, Carla Armengol, and Candela Andújar. The former 3 players stayed at the club and will be present in the first team for the season, whereas the latter 3 players have been loaned out to get first-team minutes elsewhere. Pina and Armengol have been sent to Sevilla and Andújar has been sent to Valencia, and the three players seem ready to at least be rotation players in their respective teams.

Like almost every recent season, Barcelona have come so close to full European dominance but fell short at the last second. Like every time after, they will be looking to avenge their defeat and push to win it all again.

The 2019/20 league season was cut short by COVID–19 after matchday 21, with the RFEF declaring Barça as the winners of the league for the first time in years. After going undefeated in that league campaign, Barcelona will try to repeat the same level of dominance – and they want to prove it on the pitch this time.

“I want to win again next season as well just to prove that it wouldn’t have mattered if there were 8 games left or not, that we can also win it when playing a whole season through”

Caroline Graham Hansen, on her expectations for the new league season

In August, they continued their exploits in the Women’s Champions League, reaching the semi-finals and narrowly losing to Wolfsburg. This time around they will aim to go one step closer to the UWCL title and reach the final again as they did in 2019. After going toe-to-toe with European giants like Wolfsburg, PSG and Lyon, the footballers are confident in claiming that there is no gap in quality and that they have what it takes to finally win that trophy.

It is not going to be easy, though: Barça Femení are going to play across five different tournaments throughout the season (considering the Copa de la Reina 19/20 still has to be completed) along with the league, Supercopa Femenina, Copa de la Reina 20/21, and Champions League. Player rotation will have to be managed very closely to prevent injuries and fatigue. Lluís Cortés has to be ready with a very set plan to keep the team winning and motivated.

The expectations for Barcelona this season are higher than they have ever been. Knowing how high their level is, there is no reason the players shouldn’t expect to win every competition and secure at least a treble.

Players to look out for

If Barcelona wants to keep hold of the league title along with winning other trophies this season, their crucial players need to stay fit and in-form. They will also have to rely on rotation, meaning the recently-promoted group of Barça B youngsters are likely to show their heads in some smaller matches and will be looking to prove themselves with their new opportunities.

So far, 2020 has been a breakout year for Barcelona’s second-captain Alexia Putellas. She could easily be considered the player of the campaign for 2019/20, owing to her creativity, dominance, and how she conducted herself in her newfound leadership role. She scored 10 goals and assisted another 12 goals as well as being the team’s best playmaker aside from her stat sheet.

When it comes to Alexia, it’s not just her numbers that position her above the rest, it’s her mental presence, reading of the game, and constant demand of greatness from herself and her teammates. Alexia will continue to show her importance to the team and will play a key role in Barcelona’s repeated search for a treble.

Last summer, Barcelona signed Caroline Graham Hansen from VfL Wolfsburg and she very quickly proved to be one of Barcelona’s best signings of the last five years. Hansen helped end Barcelona’s league title drought by balancing the right side and giving consistent, dominant performances, displaying her smarts and skill every time she played and eventually racking up 24 direct goal contributions in all competitions.

With the arrival of the Norwegian, Barça took a step further with their ambitions and are looking more of a complete team. If Barcelona wants to go deep into the final stages of the Champions League, it will be essential that Caroline Graham Hansen is fit and firing on all cylinders.

Last year, Barcelona’s first captain missed half the season due to injury and found a lot of difficulties getting back into the team when she fell down the pecking order upon recovery. It is not going to be easy to get ahead in Barça’s packed squad. With players like Mariona Calentey, Patri Guijarro, Aitana Bonmatí, Jennifer Hermoso and Kheira Hamraoui taking up space in midfield, it’s going to be a challenge for Vicky to prove to Lluis Cortés that she’s one of the best starting options. This could be the season where she can prove to her doubters that she has a lot left in the tank. Otherwise, this could be a make-or-break year for her role in Barcelona.

This summer, Laia Codina was one of the many Barça B talents who were promoted to the full team and had their contracts extended. Cortés also gave her the number 3, which seems like a serious statement of intent in his plans for the young defender.

Culés know how difficult it is for youth players to earn a place in the first team- it requires patience, hard work, and persistence along with a dedication to the club. Laia is a player who embodies all of these traits and is one of the players most deserving of a promotion. The former Barça B captain enters this season likely to be a rotation player for Mapi, who notoriously racks up the most minutes out of any player in the squad. This could very well be Laia’s breakout year if she takes advantage of her opportunities.

This season will have a new dynamic to the league altogether with the reconstruction of Atlético de Madrid and the introduction of Real Madrid Femenino. These matches will bring a new audience to the league, expand interest from the men’s side and possibly even form a new rivalry. With that in mind, here are three of our favourite rivalries to look out for.

For the past four seasons, the Spanish league title has come down to one of Atleti or Barcelona. Barça Femení’s rivalry with Atlético is a result of this constant back and forth battle between the two Spanish giants, and this season could be no different. These two teams always make for a stressful 90 minutes for both sets of fans, with the results usually determining who will finish the league as a winner. In recent seasons, Barça have managed to emerge victorious in almost all their ties against Atleti, notably winning 6–1 in their first league meeting last year. Atlético are looking to close the gap again since they struggled more than usual in last year’s domestic campaign.

The Rojiblancas have not beaten Barcelona since February 2019 – they have accumulated four defeats and a draw – which has undoubtedly pushed the club to look for new blood to pish for titles again. Atleti’s transfer window may have been the most active transfer window out of any other major European team. Italian defender Alia Guagni, English midfielder Jade Moore, Dutch defender Merel van Dongen and legendary Swedish keeper Hedvig Lindahl are just some of their many new signings and loanees who were brought in the summer. With such a new squad, Atlético could either be complete flops or make a serious challenge for the Spanish league title once again.

RCD Espanyol has had a turbulent past few years in the league. Their drop-in form hit rock bottom last season, and they were very lucky to escape slipping to the Reto Iberdrola when the RFEF decided there would be no relegations for 2019/20. Their 16th place finish was the worst they have ever had in club history, going winless in 21 games with 16 of those being losses.

In the offseason, Espanyol made multiple signings, had multiple departures, and replaced their coach in an attempt to keep the club out of the relegation zone. These signings include the addition of legendary Argentinian keeper Vanina Correa who will certainly prove useful to a team who struggled greatly in defense last year.

After a season as CD Tacónm Real Madrid are finally marking their presence in the highest category of Spanish women’s football. Their first match of the season, the first-ever women’s Clásico, was supposed to set the stage for the rest of their campaign – and Barcelona won by 0–4 on Sunday. At least, that was already an improvement to when they were demolished 9–1 by Barça on the first matchday last term.

Barcelona players have made it more than clear that Spain’s real women’s rivalry is between Atlético and them, and that the rivalry between Barça Femení and Real Madrid Femenino is almost fully based on the men’s game. However, depending on how events go, this season could certainly mark the continuation of the Madrid v Barça rivalry in the women’s game. In the long run, Real Madrid are looking to match or even upstage Barça’s dominance in women’s football. This is going to be one of the rivalries to watch out for in the coming seasons.

With more than 45 matches to play during the campaign, this is going to be one long season of football for Barça Femení. After taking a major leap in quality last season, the team will be looking to consolidate their position as the best team in Spain. The time has finally come for them to show that they are at the level of Europe’s greats on every possible stage.