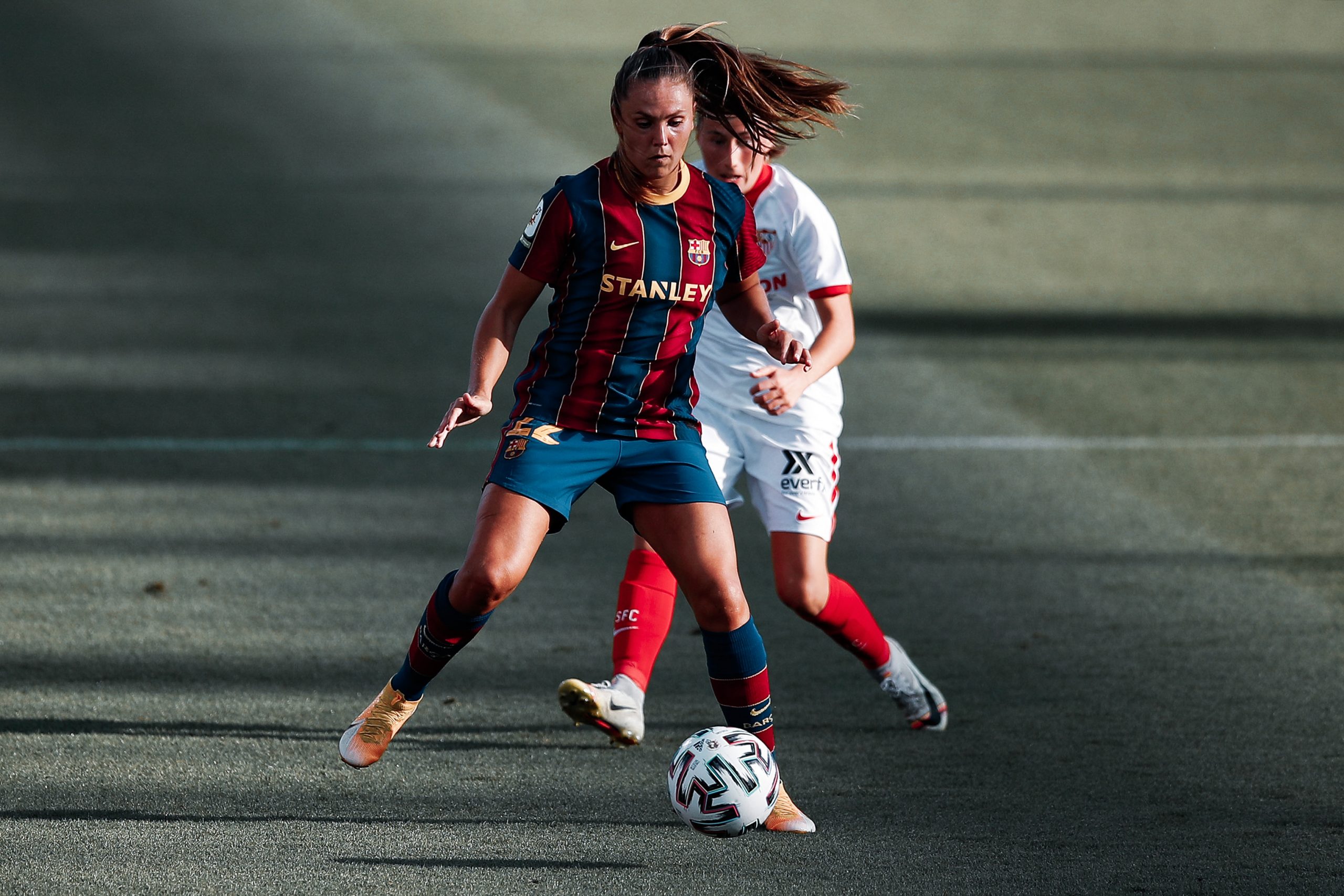 After a 2019//20 season full of ups and downs for her personally, Lieke Martens was back at his best in the month of December as she was Barça Femení’s player of the month.

FC Barcelona Femení maintained their winning record at the end of December and, despite playing three less matches than second-place Real Madrid Femenino, went into the winter break as leaders of the Primera Iberdrola. Lieke Martens enjoyed a great run of fixtures in the month of December, racking up six goals and three assists. Notably, three of those goals were scored in the important UEFA Women’s Champions League tie against PSV Eindhoven in the round of 32.

After missing nearly half of the 2019/20 season due to injury and having a rough restart since August’s Champions League matches, Martens seems to have fully returned to being a key player for Barcelona, hitting world-class form. The Dutch international has scored a goal every 85 minutes and assisted every 128 minutes in the league, and as of December, she is the top scorer for Barça Femení in the UEFA Women’s Champions League.

It was quite the task to pick the player of the month, especially given the multiple record-breaking performances from Jennifer Hermoso and the complete domination of the right side by Caroline Graham Hansen. However, Martens was simply too dominant throughout the month – especially in the two important European encounter – for her to not be chosen.

With Caroline Graham Hansen out of the clash against Santa Teresa, Lieke Martens was tasked to hold the team’s width on the right side. She showed her versatility by combining well with Ana-Maria Crnogorčević, scoring a quick hat-trick within the space of 15 minutes which helped blew away the opponent at the end of the first half.

She started the game brightly forcing a save out of Raquel Poza in the early minutes. With some intricate passing, Barca got the lead in the 4th minute through Jennifer Hermoso. It was non-stop entertainment from Barca Femeni as they continued to score for fun. In the 10th minute, Crnogorćević played a low cross into the penalty box for Martens to score an instinctive tap in.

Again in the 16th minute, she utilized her speed when Mariona Caldentey played a long pass into her path on the edge of the box. Martens controlled the ball with one foot and volleyed the ball into the net in a fantastic display of skill and technical quality. Moments later, she completed her first-ever hat trick in blaugrana colours when she either intentionally or unintentionally placed a perfectly-aimed cross from out wide into the back of the net, catching the Santa Teresa goalkeeper completely off-guard.

She didn’t think of stopping there. Martens continued to toy with Santa Teresa’s left-back, creating quality changes and eventually recording an assist in Barcelona’s sixth goal scored by the ever-reliant Jennifer Hermoso.

Barça Femení made their return to the Champions League in the round of 32 against Dutch side PSV Eindhoven. Once again, Martens was played in the right-wing position. She caused a lot of trouble in the early minutes, creating quality chances such as in the 16th minute when she picked out Asisat Oshoala, who shot the ball well above the post.

Martens’s pace provided some much-needed width for Barca on the right side, balancing out the width which was lacking down the left due to the inverted winger in Mariona. After about 67 minutes into the game, Caroline Graham Hansen was introduced into the game and Martens switched back to her natural left-wing position. As usual, switching Martens from right wing to left wing majorly improved Barcelona’s chance creation. Not soon after, at the 75th minute mark, Hansen picked out Martens on the left after a well-worked move, and Lieke smashed an exuberant volley into the back of the net. This goal gave Barça a much-needed cushion to experiment and rotate players in the second leg at home.

The Catalans welcomed PSV to the Estadi Johan Cruyff in the second leg of the round of 32. This time around, birthday girl Lieke Martens started in her natural left position while the wrecker in chief Caroline Graham Hansen started on the right side. Barcelona started the game brightly and never took the foot off the gas. Martens could hardly be stopped here.

A misplaced pass from PSV captain Mandy van den Berg led to a Barça breakaway with Vicky Losada lifting the ball over the top to the far corner for Martens to slot it home. It was later pointed out that this goal was reminiscent of Johan Cyruff’s “Flying Dutchman” goal.

Fifteen minutes before the end, Martens made it 4–0 with a second striking header following a corner.

Martens scored a total of three goals in the tie, which were important in dismantling a physically imposing, high pressing PSV side. Her performances over both legs helped Barcelona reach the round of 16 of the Champions League with ease.

Martens started in her natural left-wing position against a Sevilla side that likes to counter-attack with their pacy forwards. Although she didn’t mark the scoresheet, her dribbling and pace were a threat to Sevilla’s backline and her combination play in the final third greatly helped Barcelona’s attack. It was a convincing game from the Netherlands playmaker who continued to solidify her case to be a starter.

To cap off an excellent month, Martens made her 100th appearance against RC Deportivo. She started on the right but switched back to the left-wing to help exploit Deportivo de la Coruña’s weakness in the right-back position. Two crosses from Lieke Martens led to two further goals from Oshoala and Aitana Bonmatí before the break. If Barça were clinical in front of the final third, she easily could have ended up with more assists.

Lieke Martens will be returning from the holiday break brimming with confidence, her form hopefully continuing to some of Barcelona’s more important league, Supercup, Copa de la Reina, and Champions League matches. This includes the next match at the Camp Nou against Espanyol, a historic clash that she is very likely to start given her current form.