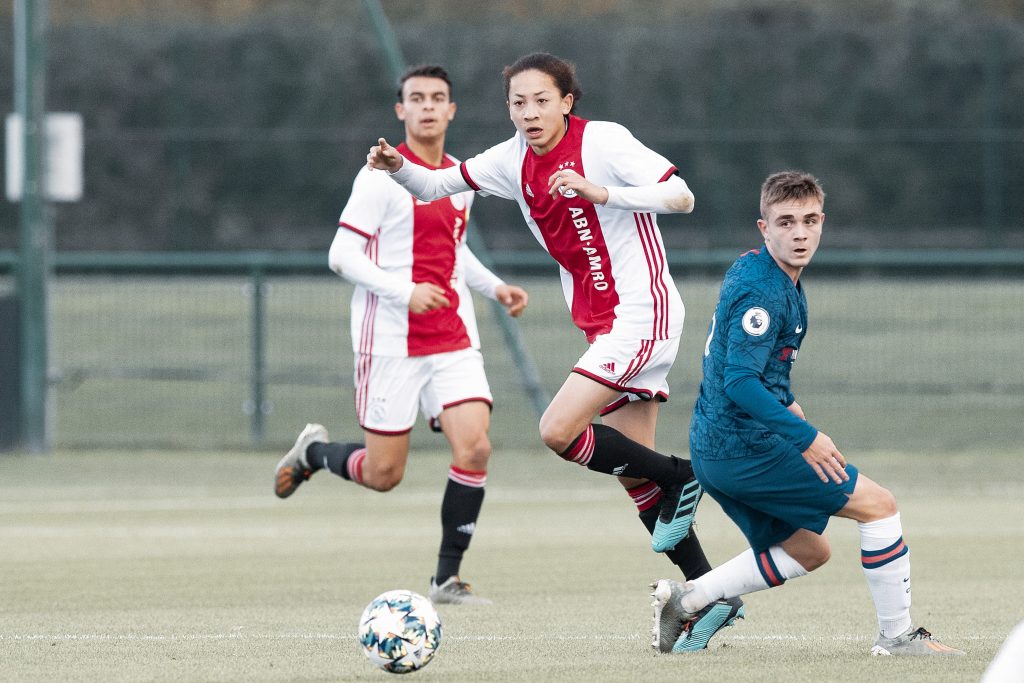 Another delightful Ajax prospect in terms of technique, vision and cognitive abilities, how high is the ceiling of 16-year-old Kian Fitz-Jim, and could he be fitted to play at Barça one day? This tactical analysis will expose why you should keep an eye on him.

Sometimes a player catches your eye from the very first time you watch them play. Personally, there have been a few such instances, namely Carles Aleñá, Maxence Caquaret, Yacine Adli, and numerous players from La Masía.

Around a year ago, the elegance, awareness and technique of AZ Alkmaar immediately caught my eye. Since then, this player named Kian Fitz-Jim has gone on to make his debut for Ajax’s U19 at 16 years of age. In this article, we will take a look at what makes him a player to keep an eye on.

Kian Fitz-Jim is a 16-year-old Dutch central midfielder who can also play in attacking positions. He has represented the Netherlands at the U15, U16 and U17 levels. At AZ Alkmaar, he played predominantly as a central midfielder or as a wide playmaker on the left. Though very attack-minded, Fitz-Jim isn’t a goalscoring type of midfielder, rather more of an orchestrator.

At Ajax, however, some changes were made to his play. He was played on the right side of midfield more frequently and he was also instructed to drop back to receive the ball from the center-backs of the defensive midfielder. This added a new dimension to his style of play. In the preliminary round of the U17 Eredivisie he just had one assist in 11 matches. Nevertheless, in the U17 Eredivisie, he has managed three goals and three assists in six matches.

Though he has made his U19 debut, he still plays majorly for the U17 side. Next season should see him play for the U19 more often and in a year more he could even join Ajax for preseason if he continues at this rate. Kian has a contract for three years signed in 2019, so he has enough time to make sure he gets a renewal.

Kian Fitz-Jim is, particularly, a very fun player to watch. His attributes in attack bring out the best of his winger-like traits.

One of the most impressive things about Kian is his excellent decision making. When we talk about the attacking aspect of footballers, of course, their technique, ball control and such are important. No doubt that this young Dutchman has a good grasp on those skills. Yet his awareness, vision and understanding of the game shine brighter. Above all, arguably his best quality may be his quick thinking. He always is two steps faster than almost anyone on the field with a clear vision of what he is going to do before he does it.

Many times, Fitz-Jim just drifts into space in between the opposition’s midfielders in the half-spaces. Regardless of how quick he is pressed, he already knows what to do next. It may be a simple pass back to his teammate or he may let it run past and dribble followed by a pass to take out the defence. Whatever he does, Kian does with a lot of confidence. Naturally, this only amplifies his already great passing, dribbling and vision.

Ajax’s Kian Fitz-Jim stands out for his technique, vision and intelligence | Photo by Imago

At AZ Alkmaar, Kian played on the left and this helped him cut inside or receive the ball in front of the defence and thread a ball through. At Ajax, though he still dribbles well, his passes are more often lay-offs and impressive line-breaking passes, and not the killer passes as earlier. At the age of 16, he is nowhere near the finished product that he will eventually be, and such changes in his position are normal. Besides, his quick lobs and chips are an excellent asset to finish off his runs with. His great accuracy and always promising excellent vision makes Kian a delight to the eye.

Furthermore, the Dutchman has great dribbling skills. With very quick feet, he darts past players with the ball often and this, combined with his close control, makes him a huge threat in transitioning from attack to defence. These talents of his allow the manager to instruct him to receive the ball in the middle of the field. From here, his passing and dribbling help the team progress and his awareness helps him to not be dispossessed easily.

Kian’s passing and ball control are close to perfect at times, which helps him in the build-up and offensive aspects both.

The first touch when receiving a pass is very important and even more so for a midfielder. Kian Fitz-Jim excels in this aspect and his first touch, along with his technical ability, is particularly impressive. His ball control, passing range and utilisation of space all complement each other, making him such an outstanding player at a young age. Fitz-Jim’s first touch is such that it sets up his next move, in yet another example of how he uses his quick thinking to stay a step ahead of the opposition all the time.

Kian’s passing has always excelled. His technique is good, sure. But his passing range is excellent. With pinpoint long balls, killer through passes and quick chips over the defence, this is one of his strongest virtues. As he has been instructed to drop back to receive the ball this season, the Dutchman has got a chance to showcase this. This is just another way he contributes to the transitions. The 16-year-old’s superb vision allows him to use his technique to thread through great passes.

Along with this, Fitz-Jim’s increase in comfort with respect to his left foot has been a revelation this season. Predominantly right-footed, Kian has done very well in terms of using his left foot more often this term. Playing on the right has made this somewhat of a necessity. He has been very confident in passing between the lines. His line-breaking deliveries are excellent and are one of the reasons why he has contributed to Ajax‘s U17 this campaign regardless of his lesser goal-contribution involvement.

At 16 years of age, Kian has impressed anyone who has seen him play. His elegance, awareness and technique are undoubtedly excellent. The fact that he plays for Ajax and his general style of play makes him a player who Barcelona could look at in the future. The excellent relationship between both clubs could definitely help this in case Barça were to be interested in him one day. His utilisation of space, passing skills and attack-minded style should be something that will help him settle in with the Catalans.

For now, Kian has to prove himself at a higher level and impress the Ajax administration. Looking at his progress, he may be playing more centrally and less advanced soon, which should suit his skills as well. Regardless of how this young prospect develops, Kian Fitz-Jim is surely a player to enjoy watching. Definitely keep an eye on this one.