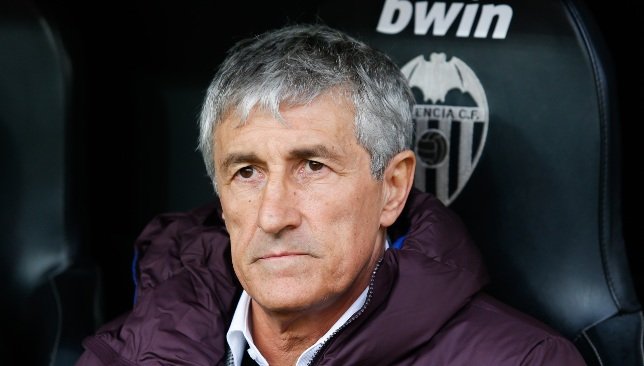 During Barcelona’s narrow win against Real Sociedad, Quique Setien perhaps showed some limits as his substitutions have been coming quite late in recent games. While the Spanish manager deserves time, he will have to change his habits if he wants to succeed at the club.

Starting a game on the bench might be one of the most frustrating experiences for a professional footballer. Most players hate being benched and several have made a big issue of it. Earlier this season, Ivan Rakitic complained publicly about his lack of playing time and magically got back in the team nearly every week since. He has found his way into the Cruyffian principles of Setien, despite being the tactician’s least preferred profile in midfield.

Setien has shown clear weaknesses these last few weeks and might have surrendered in front of the club’s hierarchies and dressing room. While painting Messi as a dictator who controls everything on and off the pitch, from the coaches appointed to the starting lineup, is a veritably lunatic theory, it is true that the Cantabrian boss has been influenced significantly by the circumstances at Barcelona.

The former Betis manager hasn’t been able to build a truly Guardiola-esque squad, plus it is fair to say that he hasn’t had much luck coming in one of the side’s most uncertain periods. The pressure he might be dealing with at the moment may be unbearable.

That said, his tactical scheme has begun to click and the players seem to gel quite well in their roles bar a few exceptions that are dealing with acute position changes such as Antoine Griezmann and Frenkie de Jong. Indeed, a few games from the Blaugranas have been superb under Quique. The away win at the Benito Villamarin was truly spectacular and showed the resilience the squad had in difficult situations to put an end to Barca’s away woes that had been causing a lot of havoc for the Catalans lately.

By contrast, other performances were more dire and uncovered the group’s limitations. Last week’s El Clasico is the best example. The gameplan for that immense game was surely not the best, as starting with four midfielders would always create sterile phases of possession in which no one would be benefitted. Setien could have changed his set-up at half-time, given these tactics already hadn’t worked in Naples a few days ago. Instead, he opted to go with the same approach after the half-time whistle and he got punished for it.

One of the biggest issues Cules have with the 61-year-old is his late substitutions. At the Bernabeu, a change was required to return home with at least one point and the league nearly secured. Martin Braithwaite, the first substitute, who inexplicably wasn’t starting in a game crying out for a player like him, came in the 70th minute.

He replaced Vidal, who had a week to forget after a red card against Napoli and a quiet game in the Spanish capital. Nonetheless, as soon as the Danish international was introduced, he created one of the biggest chances of the game. Had his one-on-one opportunity gone in, Vinicius wouldn’t have been the hero for Los Blancos.

Ten minutes after Madrid’s first goal, Arthur and Griezmann got subbed off for Rakitic and Ansu Fati, respectively. Ansu has been treated really unfairly recently and the wonderkid has been handed only a few minutes per match.

The Guinea-Bissau-born winger was seen warming up in the 50th minute of Barca’s most recent encounter against Copa del Rey finalists Real Sociedad – a narrow win resembling Barcelona’s triumph against Valladolid about a year ago ending in the same way, with a Messi penalty that would decide the two teams’ faith. The 17-year-old was seen on the sidelines alongside fellow gem Riqui Puig, but only Ansu came on for the final 5 minutes of the uneventful clash. Riqui was once more overlooked for Vidal, who made his umpteenth appearance of the campaign.

These substitution have been utilised way too late in meetings. Subbing a player on is not a game. Some managers like to waste time with subs, but that would resemble more Setien’s arch-nemesis Jose Bordalas’ footballing point of view rather than the ideology from the ex-Las Palmas and Betis boss. Setien’s tactical plans have not been perfect and he is an honest man. When something doesn’t work he is courageous enough to admit that he has made a mistake, but he should be faster to react because right now he is playing with fire and this will get him in trouble.

To add insult to injury, his decisions seem rushed. A bit like Valverde’s reactionary thinking that had been on display for the past two and a half years. Ernesto would only change his set-up if he lost. Indeed, when Diego Costa scored the opener in November 2018, the Basque manager quickly subbed on Ousmane Dembele which proved to be a genius move after the Frenchman’s superb equaliser that would help Barcelona cruise to a second league title in a row. When Vinicius opened the scoring on Sunday, Setien finally changed his team and put on Ansu Fati and went back to a three-man midfield. Sometimes emergency moves should become regular habits.

If Setien sees a bright future in Fati, he shouldn’t use him in the same way Dembele was used by Valverde, but he should play him more naturally. That means that he shouldn’t be forced in every starting line-up, yet he shouldn’t be used as a last-minute sub either. And it’s not just Fati; Riqui Puig has suffered a lot from that too.

With the inexplicable resurgence of Rakitic, the La Masia graduate has not played enough. When he came on as substitute in place of the Croat against Granada, there was a sense of hope for a kid who had been neglected under Valverde. All of this seems shattered now.

All in all, Setien has sold a lot of dreams before signing for his beloved Catalan club. He was supposed to be a messiah for youngsters given his track record and he surely hasn’t gained the full respect of the fanbase for that. Maybe his pragmatism comes from all the bad luck and stress he has lived through since his arrival.

Losing Dembele and Suarez while having to play with a thin squad and an out-of-form Messi has perhaps forced him into playing a less adventurous tactic and being reluctant to show progress because he knows he will be judged based on results for at least this month. As Barcelona look to dethrone Madrid there is a lot of noise regarding off-pitch matters and pressure is dangerously high for Quique Setien.