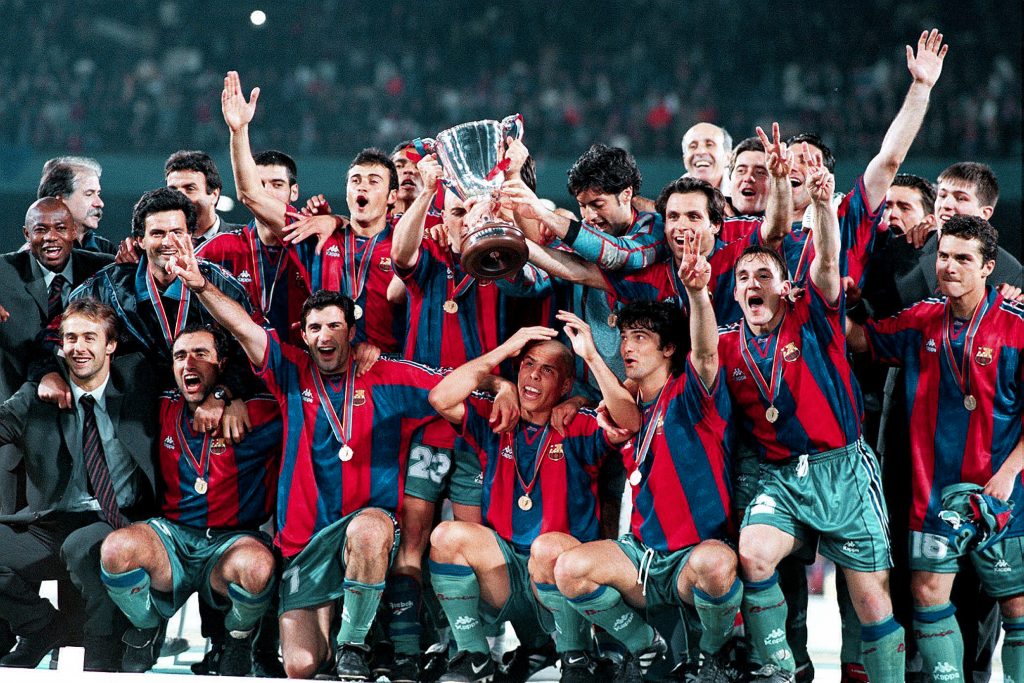 With Johan Cruyff’s departure, the azulgranas were beginning a transition stage. The club found his replacement, Bobby Robson, along with a new star: Ronaldo Nazário. The Barça of the 1996/97 season was lethal with the Brazilian, but they lacked a bit of luck to get most titles.

Barça entered into a stage of transition with the departure in 1996 of coach Johan Cruyff, who had spent eight years in charge of the club. As a replacement, the club decided to hire Bobby Robson, an English manager who arrived after doing great jobs with England’s national team, PSV Eindhoven and FC Porto. However, a different philosophy and external pressure made the Robson era more complicated.

Still, the English coach obtained results, in part thanks to Barça’s great signing that season: Ronaldo Nazário. In this campaign, Barcelona won the Copa del Rey, the Spanish Super Cup and the now abolished UEFA Cup Winners’ Cup. The team was also very close to winning La Liga, which was tight until the end, but two cruel afternoons against a newly promoted Hércules deprived them of six points with which the blaugranas would have been champion.

Before analysing the signings, a very important point must be taken into account: the Bosman ruling. It is necessary to know that the Bosman ruling began in that summer of 1996 and increased the possibility of having multiple European players in the squad. Previously, teams could only have a maximum of three foreigners on the pitch. This ended in 1996 after former footballer Marc Bosman asked for his rights and changed the history of football. This law favoured all sides, especially the international ones, and Barcelona wasn’t an exception. More freedom was allowed in the transfer market.

One of Robson’s first tasks was expanding the squad depth that the team had been losing in the previous seasons. His first great signing was a young Ronaldo Nazário. After two seasons at PSV, where he scored 42 goals in 46 games, O Fenômeno caught the attention of many clubs, including Barça. In the end, the Dutch club and Barcelona reached an agreement to transfer him for 15 million euros. Without a doubt, one of the Catalans’ best decisions that term.

As a consequence of the Bosman ruling, the blaugranas managed to sign more players. Among them was Vítor Baía, who became the starting goalkeeper, and Giovanni Silva, a creative and skillful playmaker. In addition, the return of Hristo Stoichkov added quality on the bench. Luis Enrique, after being criticised by fans at Real Madrid, arrived to Barcelona to regain his confidence. At last, others like Laurent Blanc and Juan Antonio Pizzi joined the group too.

The Bosman ruling allowed Barcelona, and other teams, to have a deep squad

Barcelona also let several players go to recover the investments made, as was the case of Gheorghe Hagi. Moreover, Mehmed Kodro also departed as he never became the striker he was in his time at Real Sociedad. Jordi Cruyff, after a series of injury problems and, most importantly, the departure of his father Johan, signed for Manchester United, where he was a great squad player under Sir Alex Ferguson.

The La Masía Pick goes to Francesc Arnau. In this campaign there was almost no confidence in Barcelona’s reserves, and Arnau was one of the few who could get his debut. A goalkeeper who started in the background this term, but whose minutes would increase in the subsequent years.

Bobby Robson, unlike Johan Cruyff, was a very conservative coach. While Cruyff liked to risk the defence to get big opportunities in offence, Robson preferred to wait for the counter-attack and increase the defensive capabilities. Surprisingly, it worked in most cases. Well, it must be said that the Englishman had the right players at his disposal to be able to apply his game system.

Vítor Baía, who had a pretty decent first season, was the goalkeeper. As the centre-back duo there were the legendary Laurent Blanc alongside Miguel Ángel Nadal. A solid partnership at all times, with the Frenchman ready to start plays from deep. And as full-backs, the well-known Sergi Barjuán and Chapi Ferrer were the starters, despite their importance decreased as the new system did not benefit them as much as in previous courses.

Not many agreed with his methods at the start of the season, but Bobby Robson ended up being an innovative coach

Barcelona played a 4–2–3–1 formation with a double pivot. Robson had the brilliant vision to discover the versatility of Gheorghe Popescu, a natural centre-back used as a defensive midfielder. Popescu formed a brilliant connection with Pep in midfield. While the Romanian focused on defensive tasks, Pep had more stamina to distribute and attack. It worked perfectly. In front of them was Giovanni Silva, who connected the pivots’ line to the front three. On the left side was Luis Enrique, a pure finisher who could also operate in his more natural central position. And on the right there was Luís Figo, key to enhancing the Catalan attack.

Finally, the number 9 was the best player on the team: Ronaldo Nazário. A physical and mental phenomenon, the Brazilian was energetic and always went with intensity to his beloved purpose: goals. His skills, connection with teammates, finishing ability in the box, intelligence to get off his mark, initiative and ball-protection skills made of R9 an unstoppable forward in his time as a blaugrana. Although many know him for his time at Inter Milan and Real Madrid, Ronaldo had his best individual season at Barça. He scored the ridiculous amount of 47 goals in 49 games. The world got to know O Fenômeno.

Barcelona had won nothing in the previous season. Still, being runners-up in the Copa del Rey allowed them to qualify for the Spanish Super Cup due to Atlético de Madrid winning the domestic double. The 1996/97 term started with Barça lifting the Super Cup trophy against Radomir Antić’s Atleti. The first leg was a 5–2 victory with a Ronaldo brace in his first official appearance with the Catalans. Robson’s team achieved a good advantage against the best team in Spain that year.

In the second leg, Barcelona did not have Ronaldo, Giovanni, Baía and Figo due to the international break. So a young Julen Lopetegui had to be the goalkeeper of that match along with other players on the bench. In the end, the clash ended in 1–3 for Los Colchoneros, but the aggregate result was of 6–5 for Barça. A title to build confidence in Robson early in the season.

Ronaldo Nazário only stayed for one season at Barcelona, but he made a legendary impact

The 22-teams dynamic in La Liga still existed for this campaign, so all sides played a total of 42 games. Barcelona was a strong candidate to win the league. However, defeats against Real Valladolid and Hércules in the final matchdays made the azulgranas drop important points. In the end, Real Madrid won La Liga with a two-point lead.

In the Copa del Rey, the culés had a brilliant tournament to remember. In the first round, they faced Real Madrid. Barcelona beat Los Blancos after a 3–2 win at the Camp Nou and a 1–1 draw on the road. In the quarter-finals, Barça faced Atlético Madrid in one of the most exciting play-offs in the club’s entire history. The first leg ended in a 2–2 tie at the rojiblancos‘ stadium after a spectacular duel.

Nevertheless, the reverse fixture was a thousand times better. At the Camp Nou, the visitors achieved a 0–3 advantage in the opening 30 minutes with a hat-trick from Milinko Pantić. Time later, in the 47th minute, Ronaldo Nazário opened the scoring for the locals, and just four minutes later he scored the second. The comeback was getting closer until, a few seconds after the 2–3, Pantić scored another goal to complete his poker and lower Barcelona’s motivation. Even so, the azulgranas continued fighting. Figo, Ronaldo, completing his hat-trick, and Pizzi turned the game around to send Barcelona to the next round after a dramatic encounter.

After that, Barcelona comfortably eliminated Las Palmas in the semi-finals and were preparing for the final against Real Betis. The final of the Copa del Rey was as exciting as the run to it. Losing by 1–2, in the final minutes the Catalans equalised the game and sent it to extra time. Here, Luís Figo dressed as a hero and gave Barça the title after a 3–2 victory through the 120 minutes.

Besides, in the 1996/97 season Barça didn’t participate in either the Champions League or the UEFA Cup, currently known as the Europa League. Rather, they took part in the UEFA Cup Winners’ Cup. This was a European tournament that involved the Cup winners of each European country, or the runners-up in case the league and the Cup champions were the same team. The latter was the case for Barcelona, and after an extraordinary run, they reached the final to face Paris Saint-Germain. The game was won by Barça by 1–0 with a penalty goal from Ronaldo in the first half.

All in all, Barcelona managed to win three trophies, even if the minor ones, and were close to achieving La Liga. Still, Bobby Robson agreed with the club to not be the coach for the following season, but remained in a secretary position for a year and was important to the adaptation of the next coach, Louis van Gaal.

In addition to his results, the affection Robson received from culés must be highlighted. His press conferences, with a young Mourinho as a translator, are still remembered. And with the passage of time, that squad has also drawn attention for the high number of players who are coaches at present. Names like Pep Guardiola, Luis Enrique, Laurent Blanc, Julen Lopetegui, Abelardo, Juan Antonio Pizzi or Albert Celades are among them.