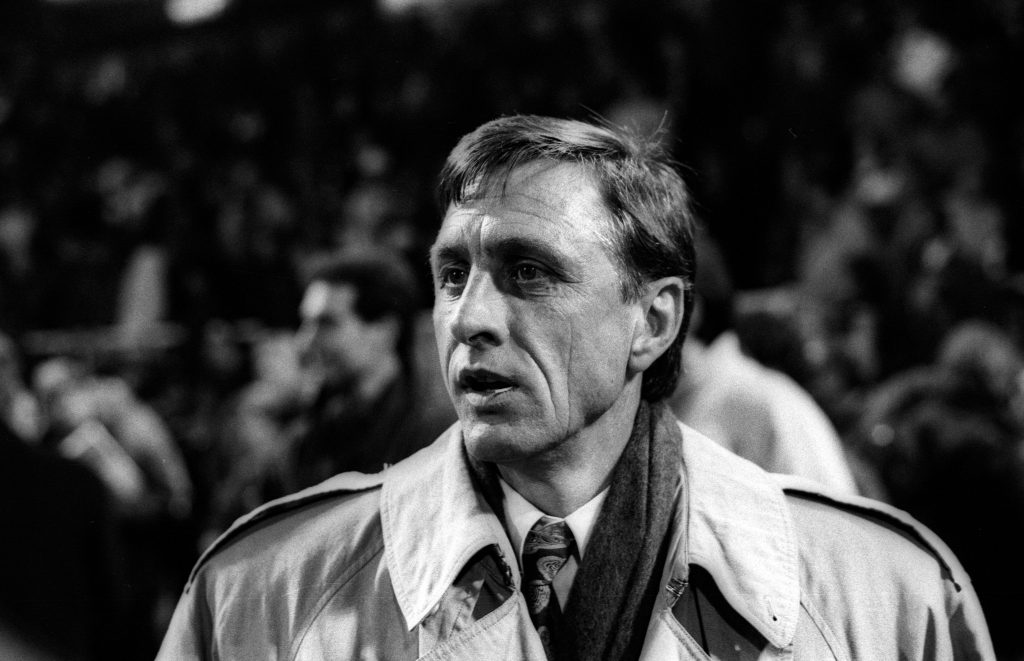 Every stage has an end. As painful or difficult as a farewell is, all those moments of success must be remembered. The 1995/96 season was the end of an 8-year career as a coach for the man who changed the history of Barça: Johan Cruyff. Unfortunately, he didn’t have a meritorious farewell. At least, not by the board.

Barcelona headed into the 1995/96 season after a dramatic campaign such as the 1994/95. Everyone thought it was already the end of Johan Cruyff’s time as the manager of the Catalans. But, to everyone’s surprise, the Dutchman continued for another year, a year that would become his eighth as the blaugrana boss. Doubts started to raise around the system that had given Barça its first European Cup: the Cruyffism, the style that Cruyff had adopted at Barcelona. Despite the fact that the board and a few fans no longer trusted this system, Johan continued to have faith and conviction in its philosophy.

❛ We all feel that hunger in football. With Cruyff, it was different. He deepened and changed the hunger so you became conscious of why you were getting better ❜

This 1995/96 course was considerably better than the previous one, even if great icons left the club such as Ronald Koeman, Hristo Stoichkov and Txiki Begiristain. Barça finished third in La Liga, reached the Copa del Rey final and were knocked out in the semi-finals of the UEFA Cup, today known as the Europa League. Still, Cruyff managed to regain some of the intensity and confidence in the dressing room, in addition to giving minutes to many youngsters from the second team.

Another trophyless season for Barça in the 1995/96 season

As mentioned before, in the summer of 1995 three key players packed their bags to leave the Camp Nou. Centre-back Ronald Koeman was sold to Feyenoord. Hristo Stoichkov, one of the best strikers who was gradually distancing himself from the dressing room, was sold to Italy’s Parma. And finally, Txiki Begiristain, an interior that could play as a winger, left to Deportivo de La Coruña, which was one of the best teams in that era.

At the time it was a hard blow for Barça and Cruyff, as they were three leaders of the renowned Dream Team. But, on the other hand, these were movements that sooner or later were going to be carried out, since they all had arrived because of Johan and they knew that the coach was not going to last much longer.

As a consequence of the sale of the superstars, Barça urgently needed some replacements. They did not fail in the search for new players. The most illustrious arrival at that time was Meho Kodro, a striker of Bosnian origin and 1.88 meters tall. He was characterised by being a lethal finisher, always with power both in the air and on the ground. Kodro was a Zlatan Ibrahimović-style of player. Kodro came from recording 23 and 25 goals in La Liga in the previous two seasons, respectively, with Real Sociedad. His statistics in Barcelona endured, but he was never the merciless Kodro of the txuri-urdines.

Barcelona also signed Gheorghe Popescu, who seemed the perfect replacement for Koeman. Popescu was a Romanian who had almost the same attributes as Ronald: fantastic footwork, ability to start plays and a huge amount of goals for a centre-back. Even in the only two seasons that he spent in Catalonia, he managed to be the captain of the team and earned the love of the fans. For several he was one of the best captains in the history of the club for his big influence.

At last, the replacement of Begiristain, much better known today than the other two: Luís Figo. The Portuguese came from Sporting Lisbon as a future promise, but surprised everyone and got a place in Cruyff’s XI. One of the coach’s favourite footballers in that season. He adapted very quickly and offered things that were no longer seen in Barcelona. Tactical intelligence, imbalance, goals, assists, but, above all, and without being Catalan, he greatly loved the city and local culture. This caused his adaptation to be even faster, and many culés to buy Figo’s shirt.

This year’s La Masía Pick is for Roger García, who at just 19 years of age was able to feature in 46 games and be a starter for Barcelona. A versatile attacking midfielder with inventiveness and confidence when playing, he could create his own shot as well as opportunities for his teammates. Roger was the one who had the greatest impact, but that year Cruyff also gave many chances to several other Barça B talents: Iván de la Peña, who was also a starter, Albert Celades and Óscar García, Roger’s brother.

The squad changed but the system remained the same. Carles Busquets became a strong candidate for the Zamora award for the goalkeeper with the least conceded goals in the league. The duo of full-backs in Albert Ferrer and Sergi Barjuán was improving more and more in a four-man defence. In the centre-back partnership, Popescu partnered up with Miguel Ángel Nadal, who recovered the starting spot in the initial XI. Meanwhile, Abelardo Fernández added competition and was the back-up for the two centre-backs.

In the middle of the axis there was Pep Guardiola as the pivot, who was in one of the best moments of his career in terms of quality. With the exits of Koeman and keeper Andoni Zubizarreta, Guardiola had more weight in the group. Roger García stayed inside from the left, and Bakero was a little more offensive as an interior.

In attack, Iván de la Peña and Luís Figo occupied the flans, while Kodro stayed upfront. The versatility of the likes of De la Peña and Figo made Cruyff use them as wingers in many cases. There was a lot of flexibility, since all offensive players, with the exception of Pep and Kodro, could take up various roles. Players like Guillermo Amor, Albert Celades, Óscar García and Gheorghe Hagi had a crucial task in the rotations.

But what happened to Jordi Cruyff, the son of Johan who had shone in the previous campaign? Jordi suffered an injury that did not allow him to play many games in his second season as a professional. Without a doubt, it was an unfortunate absence for Barça.

In the 1995/96 season, La Liga comprised for the first time 22 teams in the first division, so each club had to play four more games than usual. In total, 42 games per team. In the national league, Barça was in the fight for the title for most of the year, but in midseason the azulgranas had a couple of games in which they dropped points. That’s when Atlético de Madrid took the advantage.

Even so, Barcelona had a great campaign in La Liga, including victories such as the 3–0 in El Clásico against Real Madrid, and an average of almost two goals per match. On the other hand, the club lost twice to Atlético, 1–3 in both encounters, and once to Valencia. Both sides finished with more points than the Catalans.

Barça also managed to reach the final of the Copa del Rey. But in extra time, Atlético de Madrid scored the winner and took the title. Moreover, Barcelona failed to qualify for the Champions League, so they had to play the UEFA Cup. After a great run, they were eliminated by Bayern Munich in the semi-finals. A Bayern in which legends Lothar Matthäus and Oliver Khan were the main references. In the first leg, Barcelona achieved a good result after a 2–2 draw with goals from Óscar and Hagi. However, the Germans managed to pull a surprise at the Camp Nou with two goals. Barcelona were able to score just one goal in the final minutes, but it was not enough to force the extra time.

The end of Johan Cruyff’s era as a coach

This is how the last season of the man who changed the history of FC Barcelona ended. Hendrik Johannes Cruijff had established a unique philosophy and style, and brought unequalled success by that time. In his eight years as a coach, Cruyff’s Barcelona won four La Ligas, one Copa del Rey, one European Cup, one European Cup Winners’ Cup and one UEFA Super Cup. The so-called Dream Team set a new standard of excellence at the Camp Nou, to which their subsequent reincarnations have aspired. Nothing like this had been seen in the azulgrana team before Cruyff’s arrival.

❛ Cruyff defined a philosophy and a style of how we had to play: positional play, type of players, even the profile of the coaches ❜

Still, Johan Cruyff was fired due to disagreements with president Josep Lluís Núñez, who was resentful of the Dutchman’s influence. Cruyff had more autonomy than a coach in Spain normally enjoyed, and Núñez wanted to change that. But even when Cruyff’s legacy was undervalued and often denigrated by fans and executives of the moment, his DNA ran throughout the club, almost subconsciously. It was integrated into the spirit of the shirts, incorporated into everyone’s mentality. He became FC Barcelona, as had happened with Ajax in Amsterdam.

But Núñez was jealous. At Barça, Cruyff was the leader and the board was in the background. After the 1994 European Cup final against AC Milan, which the blaugranas lost, Núñez seized the opportunity to make excuses that this style was not working. He wanted to take credit away from the creator of this philosophy. But it was impossible. Taking credit away from Cruyff was taking credit away from Barcelona, because what Núñez didn’t know is that Johan Cruyff and Barcelona were one single unit.