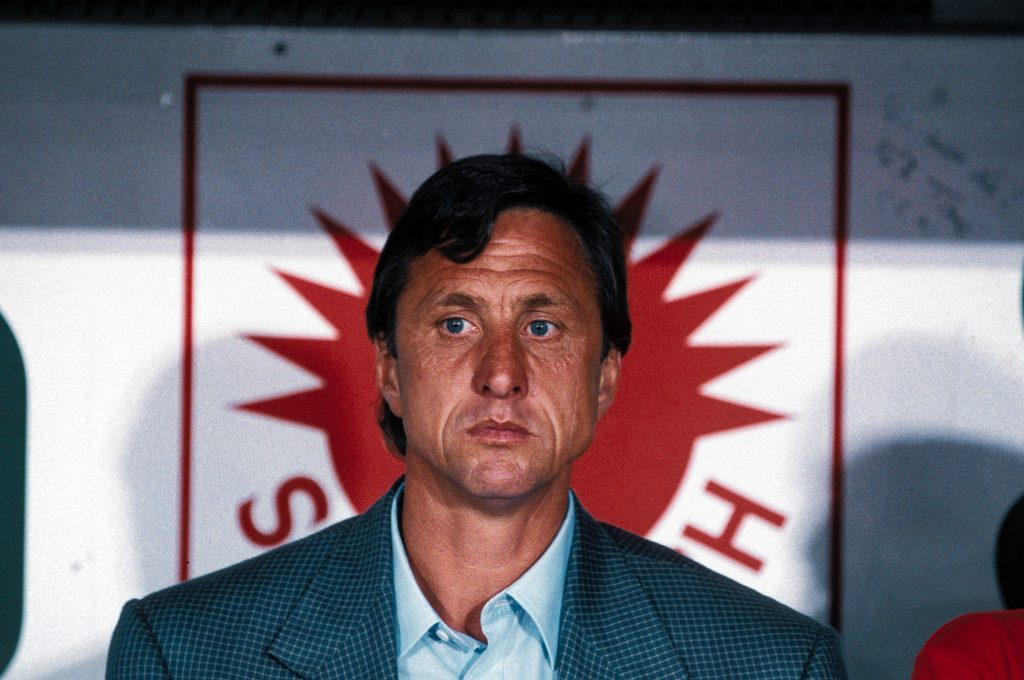 Since the defeat in the Champions League final against AC Milan, the blaugranas weren’t the same. There was no ambition anymore, the group began to divide and Cruyff’s relationship with Núñez went from bad to worse. It was clearly reflected in the team’s results. Johan’s decline began. Barça had a season to forget in the 1994/95.

FC Barcelona’s defeat against CSKA Moscow in the 1992/93 season motivated the Dream Team to achieve great things. Unfortunately, the Catalans were beaten by AC Milan by 4–0 in the Champions League final of the 1993/94 campaign. That was the day that the spirits of Johan Cruyff’s team died. There was no faith. The Camp Nou experienced a dark storm, the players lost confidence, and the press and president Josep Lluís Núñez were increasingly convinced that the Cruyffism was no longer a feasible method for the club’s ideals.

Even so, Cruyff was faithful and convinced in his philosophy. Despite the poor results, he kept trusting his approach. Sadly, he was the only one thinking that he could win something. The group was unmotivated and Johan couldn’t instil optimism in them. Furthermore, the indiscipline and departure of striker Romário did not help recover Barça’s hunger either.

Cruyff’s worst record as a coach

At the beginning of the 1994/95 season, Barça made smart moves. They let Michael Laudrup, one of their best players, go to Real Madrid. However, the Danish was already in his last years as a professional, and receiving 9.60 million euros for him at that time was a lot of money. Laudrup left the club because he thought that his time with the Catalans had ended with Romário’s presence, so Barça agreed to sell him.

In addition, veteran centre-forward Julio Salinas also left at a good price. Andoni Zubizarreta was another who departed that summer. After the lost final against AC Milan, Andoni received much criticism for his poor performance against the Italians. He was the one affected the most by the defeat, and decided to go to Valencia. Following Zubi‘s steps, defender Juan Carlos was sold to Valencia too.

Zubizarreta left the club after 8 years defending the blaugrana colours

Still, there was another player who left the club: Romário. After winning the World Cup with Brazil in 1994, Romário enjoyed celebrations in his native country and didn’t want to return to Barcelona in the summer. The Brazilian came back very late to training with Barça. That’s how he fractured his relationship with his teammates. While the other players were working, Romário, as a good Brazilian, was partying, playing friendlies in Brazil and eating poorly. In fact, the superstar didn’t even have a house in Barcelona, ​​as he lived in a hotel and never adapted to the city and culture. He wanted to live in his beloved country.

Once he returned to Barcelona, ​​20 days later than planned, Cruyff was not so worried. The Dutch manager let Romário could go partying as long as he scored the goals. All the same, the only thing that kept him alive at the Camp Nou disappeared: the goals. That was when Johan Cruyff decided to be true to his ideals that no player is essential and allowed Romário to force a transfer in January. This is how Romário finished his short yet magical spell in Barcelona and returned to Brazil to play for Fluminense.

As for reinforcements, Barça made three major additions ahead of the 1994/95 season. Gheorghe Hagi seemed the ideal substitute for Laudrup. The Romanian was an agile, versatile number 10 and chance creator that could play as a midfielder or striker. Hagi was not a starter with Cruyff, though, but had a more secondary role. While expectations were high with Gheorghe, he did not live up to them.

Additionally, the azulgranas bought Xabier Eskurza, a midfielder who showed much promise to take an important role in the club. Notwithstanding, he could not adapt to the city and team. Finally, the great signing: Abelardo Fernández. Most people will know him for his time as a coach, currently at Espanyol, but as a player he was brilliant.

The La Masía Pick of the 1994/95 term goes for Johan’s son, Jordi Cruyff. After a period at La Masía, he got promoted to the first team. Jordi was a highly versatile footballer who, despite having been developed as a midfielder, Johan used as a striker or an offensive midfielder. Consequently, he earned the starting position in his father’s team, scoring 9 goals in 28 La Liga games. Jordi, like the legendary Cruyff, had a unique agility and an offensive and tactical sense that helped him in his early years as a football player.

In spite of Zubizarreta’s departure being tragic, it opened the door for Carles Busquets, a faithful Catalan who had been in Barcelona all his life. After more than 10 years of waiting, at 27 years of age received his long-desired opportunity. Carles didn’t do badly, but the bad times at the club didn’t allow him to take advantage of that opportunity. His last name, Busquets, may sound familiar to you, but more for his son Sergio than for Carles.

Moreover, in this year Cruyff changed his approach, influenced by Núñez and the press, and by Abelardo’s good displays. He abandoned his favourite 3–4–3 for a diamond-shaped 4–4–2, which could transform into a 4–3–3 with a centre-back duo formed by Ronald Koeman and Abelardo.

The already established Albert Ferrer and Sergi Barjuán started at full-back. They were benefitted by this system, because they had more freedom to be offensive without much concern. In the middle of the field, Pep Guardiola remained as the pivot, with Txiki Begiristain and Guillermo Amor on the sides. Cruyff used his squad’s depth to experiment with Begiristain, Amor, Iván Iglesias and Eusebio Sacristán. Rotating between the four, all had similar characteristics but no one stood out greatly in any attribute.

For example, Amor was used when Cruyff wanted more possession, with Iglesias to create space and play with a better winger. At the top of the diamond, José Mari Bakero set up the offensive game and made arrivals into the box. He rotated with Hagi. As the forwards, Hristo Stoichkov stopped acting as a natural winger to become a second striker, although there were games in which he acted in his previous position. Next to Histro there was Jordi Cruyff. He was handed the minutes resulting from Romário’s situation. The Brazilian was the natural starter, but his controversies gave the young Jordi the starting spot.

The low spirits of the dressing room, the departure of Romário, the pressure from the media, the Núñez–Cruyff relationship and the little faith in the new system made the 1994/95 season one of the worst from Barça in the Cruyff era, if not the worst. For instance, the team finished fourth in La Liga after winning that competition for four consecutive years. There were humiliating defeats, like the 5–0 against Real Madrid at the Santiago Bernabéu or the 5–0 from Quique Setién’s Racing de Santander.

Likewise, in the Copa del Rey the azulgranas were eliminated prematurely by Atlético de Madrid. Finally, as expected, Barcelona were knocked out of the Champions League in the quarter-finals, which was the last hope of the Catalans.

Even so, at the end of the disastrous season Cruyff was still trusted. The fans loved Johan, but not the media and president Núñez. They made it seem as if it was all the Dutchman’s fault. Everyone expected Johan to leave or be fired, but it was not the case. In the end, Cruyff stayed there for one more year.

However, the players lost faith in the tactics that brought them to glory. Koeman, Stoichkov, Begiristain and Eusebio left the club in the summer of 1995. At the time it was understandable, yet the magnitude of the drama and the lack of encouragement led to the start of Cruyff’s decline as a coach. Everyone seemed disappointed with his ideals, except Johan. He kept trusting, which made him more admired and brave.

• 1992/93: From European champions to European failure