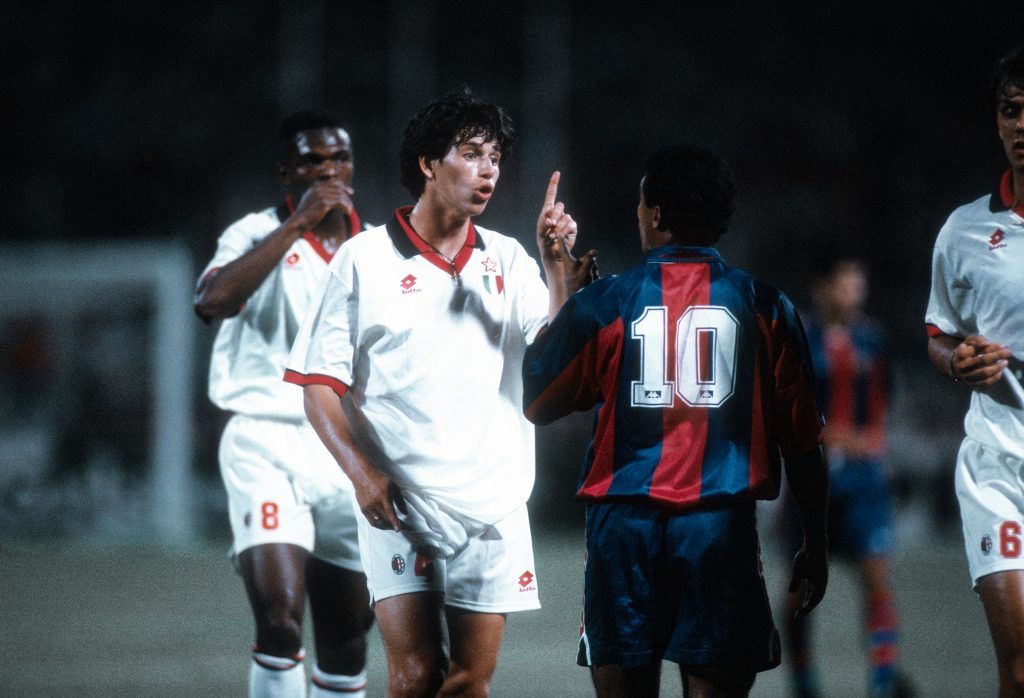 After the European failure in the previous season, the Catalans were motivated to achieve something more. Successful measures were taken, such as Romário’s signing and the promotion of Sergi Barjuán. Unfortunately, Barça remained inches away from glory. Let’s relive Barça 1993/94 season.

The embarrassing elimination against CSKA Moscow in the 1992/93 season left the blaugranas with a lot of pain that became a motivation to excel in this new campaign. The motivation that made the Catalans reach their second Champions League final with Johan Cruyff and get the fourth league in a row. A historic league in which, despite trailing Deportivo de La Coruña, Barcelona fought until the last match to win it. On the other hand, Cruyff’s team couldn’t win that Champions League final or go further in the Copa del Rey. However, the rest of the season had been one of the club’s best. Only one game could have changed the rest of history and made us recognise this year as one of the greatest ever. Let’s analyse Barça’s 1993/94 season.

Barcelona won its fourth league in a row

In the past seasons, Cruyff used to play with Laudrup as a false 9. In some games he experimented with some other players in the middle, but often without success or constancy. The club needed a pure goalscorer, a 9, someone not from La Masía but who understood the philosophy. Fortunately, the club found the perfect player: Romário. The Brazilian was signed at 27 years of age from PSV, where he had scored an astonishing 127 goals in 147 games. An average of 0.86 goals per match. Barcelona signed a footballer who, statistically, had a 86% chance of scoring in every single clash. As expected, Romário’s adaptation was incredibly fast and his goals were not lacking. He managed to be the main reference in attack and scored 32 goals in all competitions that course.

Cruyff signed the goalscorer that was lacking in his team

Likewise, the club also signed Iván Iglesias at the age of 22 to add quality and extra ambition to the dressing room. Moreover, Iglesias was versatile enough to play in midfield or as a winger. A great addition to generate competition with Laudrup or to have a powerful weapon to use tactically. The La Masía Pick goes for Sergi Barjuán, who was the perfect left-back for the azulgranas. Barjuán adapted to Cruyff’s demands so quickly that he became a crucial man for the team. In fact, he was an example to follow for Jordi Alba, who learned his movements by watching Barjuán in action.

Although there were doubts on the defensive back 3 in the previous season, Cruyff was convinced of his ideals and kept that tactic. The difference was that this time there was a pure scorer like Romário. Barjuán and Ferrer as full-backs maintained a balance between attack and defence. It was the perfect combination of full-backs, the ideal one Johan always dreamed of. Two attacked-minded experts, fast and with tactical intelligence. Between both, it could be none other than Koeman to complete the defensive line, adding more composure in defence and starting the plays from deep.

In midfield, the Guardiola–Bakero duo was a kind of double pivot, but with Bakero playing slightly more offensively. Amor and Goikoetxea on the sides extended the width of the plays. In attack, Stoichkov, Romário and Iván Iglesias was the frequent trio. Although Cruyff also exchanged Iglesias for a higher-positioned Goikoetxea at times, Johan sometimes included Laudrup in attack or Begiristain as a midfielder. It is worth remembering that, before the Bosman ruling, only three foreigners were allowed per team, and Barcelona had four stars: Koeman, Stoichkov, Romário and Laudrup. One had to be left on the bench, and in the 1994 Champions League final it was the Dane who was sacrificed.

Besides, Barcelona had a large number of players to adapt and modify the team depending on the rival. The Dutch coach had great freedom when it came to doing what he wanted since the squad was deep enough.

In La Liga, there was an exciting and challenging title race between Barcelona and Deportivo La Coruña. Like the rest of the league titles that Cruyff achieved with a little luck, this was no exception. In the end, both teams were tied on points, but the goal difference gave the trophy to the blaugranas. This was their fourth league in a row, a feat that had never been seen at Barça. This was the campaign in which the Dream Team had the greatest impact on an offensive level and it is the one that commemorates unreal victories. The 5–0 against Real Madrid at the Camp Nou, the overwhelming 8–1 triumph over Osasuna with Romário’s hat-trick or the 0–4 win versus Valencia, among many other out-of-this-world performances.

Nonetheless, in the Copa del Rey the Catalans were not lucky enough. In the quarter-finals, Real Betis eliminated Barcelona at the Camp Nou with a tight 0–1 result, after the 0–0 draw in the first leg. In the Champions League, the Catalans started with a disappointing defeat against Dynamo Kyiv, but from there they dominated Europe to reach the second final of the European tournament in 3 years.

❛ We’re more complete, competitive and experienced than at Wembley. Milan are nothing out of this world. They base their game on defence, we base ours on attack ❜

The illusion of dominating Europe was as great as the season the club was having. However, the culés witnessed one night that harmed the rest of the season. The Spanish giants faced Capello’s AC Milan. Despite the team the Italians had, Barcelona were the favourites to be crowned kings of Europe for the second time in their history. Notwithstanding, Cruyff’s side suffered a humiliating 0–4 loss to Milan. Barça had been so close to lifting the Champions League, but were surprisingly neutralised from it. The defeat to CSKA Moscow in 1993 had already started a rupture in the Cruyff–Núñez relationship, and this failure made it worse.