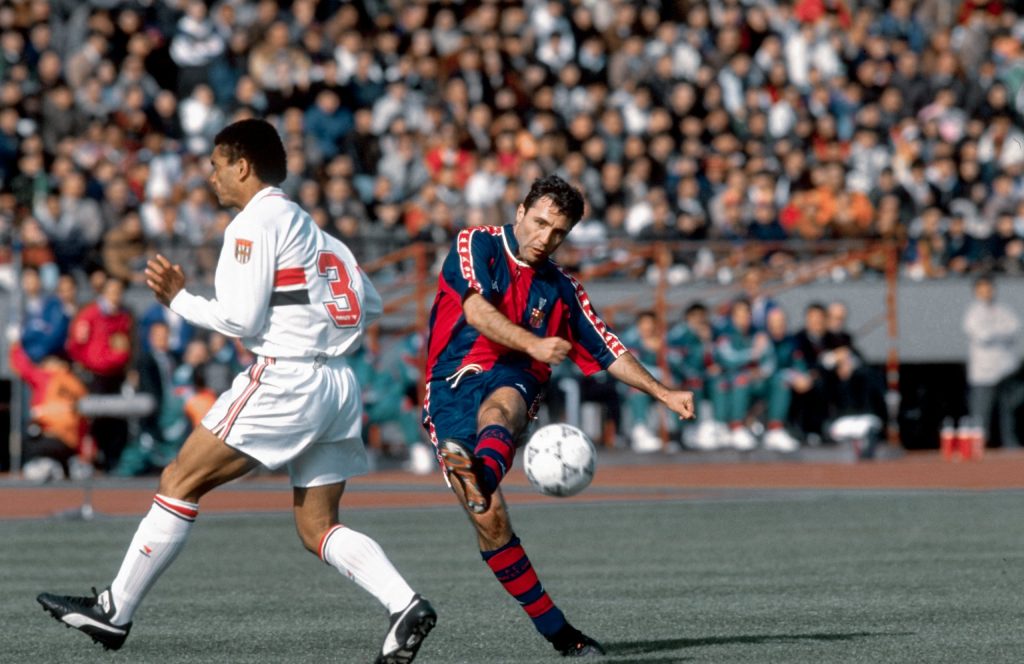 After the historic 91/92 campaign that ended with the first European Cup, the Catalans sought to be just as dominant in this new period. Although there was not the expected success, it was not such a bad term. A look back at the 1992/93 season from Barça.

In the 1992/93 season, Barcelona came from reaching the top of the mountain where the Dream Team believed themselves untouchable. They had reason to believe it. Cruyff kept the same core of players that made the Catalans lift their first European trophy, and thus expectations were high from all fans and the same team. The blaugranas started with determination and with their feet on the ground, but a couple of games made the possible golden season fall into the abyss. A fall that was not so painful thanks to the fact that the La Liga trophy cushioned the strength of that collapse. That was the reality of Barça in the 1992/93 season.

Despite not getting the Champions League or the Copa del Rey, Cruyff’s side managed to win their third consecutive league and make history in the Spanish championship. In addition, they managed to win the Spanish Super Cup and the European Super Cup earlier in the season, yet these were trophies considered from the previous course. There was one more title that the azulgranas could get, which was the Intercontinental Cup, today known as the Club World Cup. Barça faced Sao Paulo with their gala XI in an even match. Stoichkov opened the scoring early in the game, but the Brazilians were able to make a comeback to win the world championship with a 2–1 result, thus preventing Barcelona from winning 5 out of 6 possible titles in the 1991/92 term.

The Dream Team that won the Champions League the previous season already had the knowledge and the adaptation required to continue operating. Versatile players with the right profiles. A combination between La Masía and players that Cruyff had already formed. However, Nando’s controversial departure to Real Madrid forced Barcelona to make a signing to rotate in defence. It was controversial because Sevilla, the footballer’s previous club, had a clause to re-purchase him, leaving Johan without power to avoid his transfer. Nando had to move to Sevilla, but he refused to play and forced his departure to Los Blancos paying his clause from his own pocket. With all the drama, Cruyff signed the young Pablo Alfaro, who had a hard time adapting since he was a purely defensive profile. Alfaro didn’t know how to touch the ball nor how to control it. It was certainly not the best replacement.

Furthermore, Johan was observing an international talent: Goran Vučević. The Dutch coach requested this prospect as a second option in the event that any star of the squad left the club. Vučević played as a midfielder and became the first Croatian in the club’s history. He barely played 2 fixtures in his first season with the blaugranas, but was more concentrated with the second team. In the end, he had an undisciplined behaviour with Cruyff, which is why he was no longer called regularly for the games. Barça also brought Miguel Soler back, as he had left the club in the previous season but returned in Soler’s last term as a Catalan. In this last dance, Soler was a wildcard to rest the already specialised Ferrer, Nadal and Juan Carlos.

Just as the first team worked, La Masía factory also kept making promises. This time it was Óscar García who played 4 games in the 1992/93 season, but the manager of Barça could already see flashes of his talent. A youngster with the ability to finish at first touch which Cruyff decided to work even harder on so that, in the coming years, he was ready to be a lethal product from the academy.

The starting XI of Barcelona in the 1992/93 season didn’t change much from the previous period. The only inclusion was Albert Ferrer who, after a successful recovery of a 6-mont injury in his knee, was able to perform at the highest level. Moreover, there were more rotations, it was difficult to predict which XI would Johan surprise us with. Weapons like Goikoetxea, Witschge, Julio Salinas and Juan Carlos were crucial for the team to always function in the same way regardless of rotation. Fewer minutes for Eusebio and Amor, and in spite of not winning the same titles as in the previous season, the team was collectively more lethal with the wingers opening more and more spaces with unique width.

Perhaps the only factor of change was Chapi Ferrer, who became a nightmare for the rivals. Albert was the first man to come out to press on the defensive line. He had a commendable tactical awareness to be able to read the plays of the opponents, such as in which location a long pass would be directed or the talent to predict with great ease the movements of his mark. If we talk about statistics, when Ferrer was on the field in the league, Barcelona received 21% fewer goals compared to when Ferrer was on the bench. In the same way, the team received 9% fewer league goals compared to last season, a season in which Ferrer did not play many minutes.

Barça won La Liga in the 1992/93 season, curiously with the same level of drama as in the previous campaign. It was a déjà vu. The azulgranas arrived to the final matchday with Barcelona trailing Real Madrid by a solitary point – also, let’s not forget that by that time a victory was valued in two points, rather than three. Exactly the same situation as in 1992. It seemed as though Real Madrid were poised to lift the title, having a slight advantage ahead their final duel. Ironically it was against Tenerife, who denied them the title on the final day of the previous season. To the surprise of the whole country, Tenerife beat Los Blancos by 2–0. The Catalans didn’t disappoint and beat Real Zaragoza by 1–0, winning the third consecutive championship.

In the Copa del Rey, Barcelona reached the semi-finals against Real Madrid. The first leg ended in a 1–1 at the Santiago Bernabéu. Everything was to be decided at the Camp Nou, where los merengues got the lead in the first half. Subsequently, Zamorano extended the advantage with 8 minutes remaining. The goal from Laudrup in the 87th minute was not enough to get a draw and force extra time – as there was still no away goal rule.

The reigning champions of the European Cup had hopes of repeating the feat. This time, the competition has changed its name and format to become the Champions League. In the second round, Barcelona faced CSKA Moscow, a team with a challenging stadium. The first clash ended in 1–1, a relief for the Catalans who managed to get an away goal in that tie. Barça came to the Camp Nou motivated to ensure the ticket to the next phase and to continue fighting for the big trophy. They were clear favourites to win it again.

❛ Fatal, I’m fatal. Now, nothing of what we have done is worth anything ❜

Pep Guardiola
after the elimination in the Champions League

Later on, at the Camp Nou, two goals from Nadal and Begiristain in the first 30 minutes seemed decisive for Cruyff’s men. However, this is football and it’s a sport where anything can happen, something that at that time the players had not contemplated. At half-time, Cruyff pulled Pep out of the game in an inexplicable decision, as Guardiola was among the best on the pitch. The Russians managed to overcome the 2–0 deficit in less than 20 minutes to eliminate the defending European champion, paralysing the televisions of the old continent. After the second goal, Johan played with only two centre-backs for the remained of the match in Koeman and Ferrer. Barcelona became blocked in their own half and stadium, and, what is much worse, eliminated from the competition of which they were the current champions. It was a very painful blow for the culés, but Barça clearly knew how to learn from it to return stronger from this disappointment. From that moment, though, the relationship between president Nuñez and Cruyff began to be very delicate.

Barça 1991/92 season: European catalyst from Cruyff’s Dream Team
What did you think of this article?