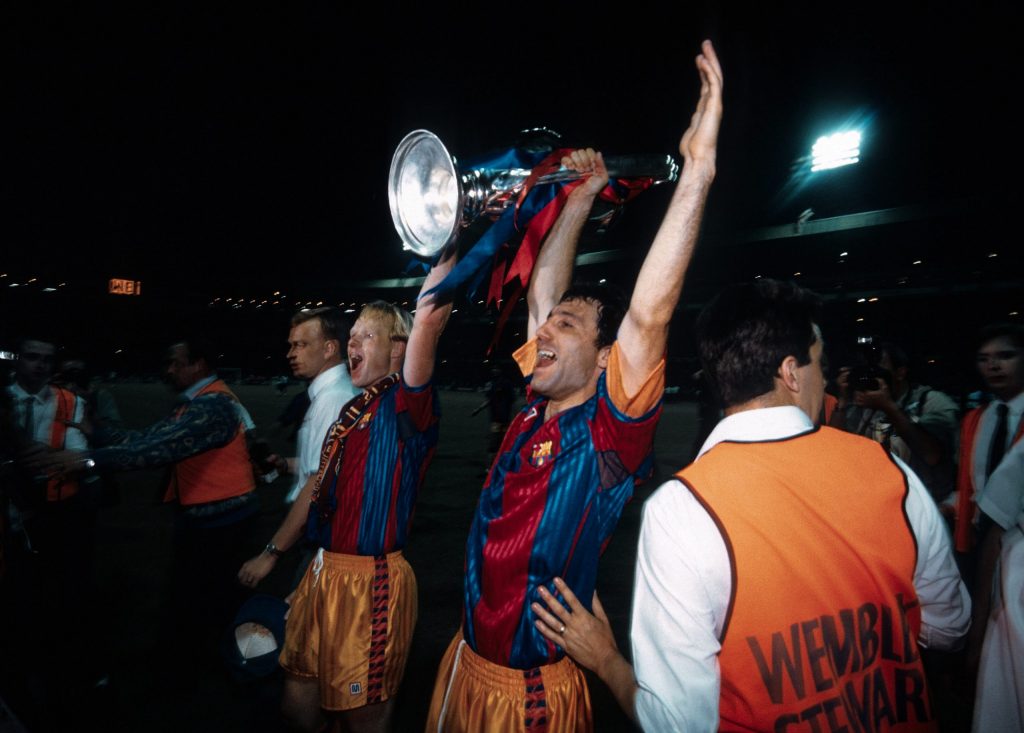 After Cruyff arrived in 1988 to revolutionise Barcelona, the much-awaited European Cup title did not arrive until four years later. The blaugranas maintained a long-term project that was the beginning of more success. We reminisce the 1991/92 season from Barça.

The 1991/92 season was one of the most glorious seasons in Barcelona’s history, as the team managed to win La Liga, Champions League, Supercopa de España and European Super Cup. These last two trophies were won in the 1992/93 season, yet are also considered as this course’s trophies. Although the titles make us believe that this season was perfect, the reality is that there were many obstacles and difficulties that, without a bit of luck, could have made the azulgranas go trophyless. Fortunately, this was not the case. Not this season.

The blaugranas managed to overcome the obstacles that were on their way to end up winning those four titles. Titles that were won following the institution’s philosophy, and what better way than with Johan Cruyff as a mentor. In 1988 the Dutchman began to form a team based on values, restored La Masía and applied a game system that today is Barça’s identity. Cruyff was so powerful that year that the media took it upon themselves to call this side the ‘Dream Team’. This nickname was given to the squad precisely because in that year there were the Olympics Games too and the USA basketball team had never been so dominant in its history. The same thing happened with Barcelona.

The foundations of the team were already laid and settled. Therefore, to face the great challenges with full guarantee, the measures that Cruyff took were more delicate than revolutionary, but always important due to the slight movements he made. The Catalans that summer added four new faces to their squad. Cristóbal Parralo returned after having met with Johan in his first year in Barcelona already, and ​​would add rotation in defence. Juan Carlos Rodríguez, a natural left-back, a position where, after Julio Alberto’s retirement, the team did not have a replacement. Nadal, a new card in defence capable of reaching the goal as a playmaker and of reinforcing the back as a central defender, all in the same move. And, finally, Richard Witschge, the desired number 10, since he was a much-needed left-footed and technical player.

On the other hand, the club had to let Miguel Soler, López Rekarte and Sebastián Herrera go. Perhaps the most significant departure was the one of Soler, but Johan had an improved alternative to him with Witschge, who was undoubtedly vital to the squad’s rotation depth. Tactically, the play focused a lot on the right side, but Cruyff needed his Barça to be just as deadly on the left as on the right, thus why he recruited Richard. The young Dutch was a substitute in La Liga, but in Europe he was crucial to reach the final. Unfortunately, he was unable to play the final at Wembley due to physical problems. A player who brought explosiveness and speed in a different way to the rest.

❛ Our team is really good. The signings have served to provide details, not to the starting eleven, but to the potential of the squad ❜

Johan Cruyff
on the signings for the 1991/92 season

Moreover, La Masía was still working, but this time Pep Guardiola left the academy to join his beloved first team. Despite making his debut in the previous season, it wasn’t until then that Pep earned El Flaco‘s trust and was a starter in almost every match as a pivot. His technical quality did not compare with how smart he was. Pep was Johan’s mentality on the pitch. That’s why he wanted him there, even if Guardiola was barely 20 years old. Cruyff wanted proactive footballers, and the Catalan was one of them.

The starting XI from Barcelona in the 1991/92 season constantly underwent changes. But the line-up below was one that was in action the most, along with others such as Juan Carlos, Goikoetxea and Witschge. Between the sticks stood one of the best goalkeepers in the club’s history, Andoni Zubizarreta putting his great technique and leadership on the field. Cruyff used to deploy a 3–4–3 with Koeman as a centre-back, but also being the one who started the plays with the ball and his pinpoint long distribution. At his sides, Nadal and Nando contributed both in defence and attack constantly.

Johan Cruyff applied the 3–4–3, surprising any other team with this formation

In the centre of the park, Guardiola acted as the pivot to give instructions and read the continuity of the game to ensure that the tactics of the mister were being fulfilled. Bakero above Pep was the connection with the attack. On the left side there were Guillermo Amor and Txiki Begiristain, while on the right stood Eusebio and Stoichkov. Michael Laudrup was utilised many times as some sort of false 9, being one of the pioneers of this position for Cruyff. There were times when Stoichkov played in the middle and Eusebio more in attack, others when Laudrup played a little behind. Different variations, but always with the same idea and conviction.

Besides, while in the European final to Sampdoria Chapi Ferrer and Julio Salinas would be starters, the former was just returning from a six-month-long injury, and the latter usually was a regular substitute.

As mentioned earlier, there were obstacles and, without some fortune, we would not be talking about such success. In La Liga, Barcelona had a poor start, losing 3 out of their first 8 games. However, hegemony began to turn as the azulgranas experienced a brilliant run losing only 3 out of their following 30 fixtures. Little by little, Johan’s men were getting better, but, even so, Real Madrid was still in the first place. Going into the final matchday, Barcelona were trailing Los Blancos by a solitary point. Happily, while Cruyff’s Dream Team won its final duel, Real Madrid lost to CD Tenerife by 3–2, handing the second consecutive title to the blaugranas.

Koeman scored 16 goals despite being a centre-back

In the Copa del Rey, the Catalans were knocked out from the tournament prematurely. Valencia beat them by 2–0 at home in the first leg, but in the reverse fixture Barcelona were able to force extra time with a 3–1 win at Camp Nou – there was no away goals rule in that contest. In the 99th minute, Laudrup scored the heroic goal to make it 4–1 as Barça were bound to make it to the next stage. Nonetheless, in the 119th minute Valencia pulled an equaliser in dramatic fashion. After that, the dream of the treble for Barcelona disappeared as Los Ches won on penalties by 4–5.

❛ In the end, it was two fouls that allowed us to win the first European Cup. Everyone talks about Wembley’s, but before there was Kaiserslautern’s ❜

Finally, Barcelona saved the season by winning the mentioned La Liga and, most iconically, the first European Cup in the club’s history against Sampdoria. Although, admittedly, the path to the first continental title was not easy. The Catalans were almost eliminated by Kaiserslautern in the second round of the tournament. Still, with Bakero’s 90th-minute header, the tie ended in 3–3, but the away goals rule gave the victory to Cruyff’s team. From there, Barcelona was consistent until finally reaching the Wembley final. That final was not easy either, as the Spaniards suffered a lot to get their hands on the trophy. Following the 0–0 over the first 90 minutes, in extra time Koeman dressed up as hero to score the winning goal. A strike that came in the 112th minute with a spectacular free-kick. A triumph that was proof that Barça were on the right track with the Cruyffism. This first European Cup marked the rest of the club’s history.

Andrés Iniesta: Forever a Legend
What did you think of this article?