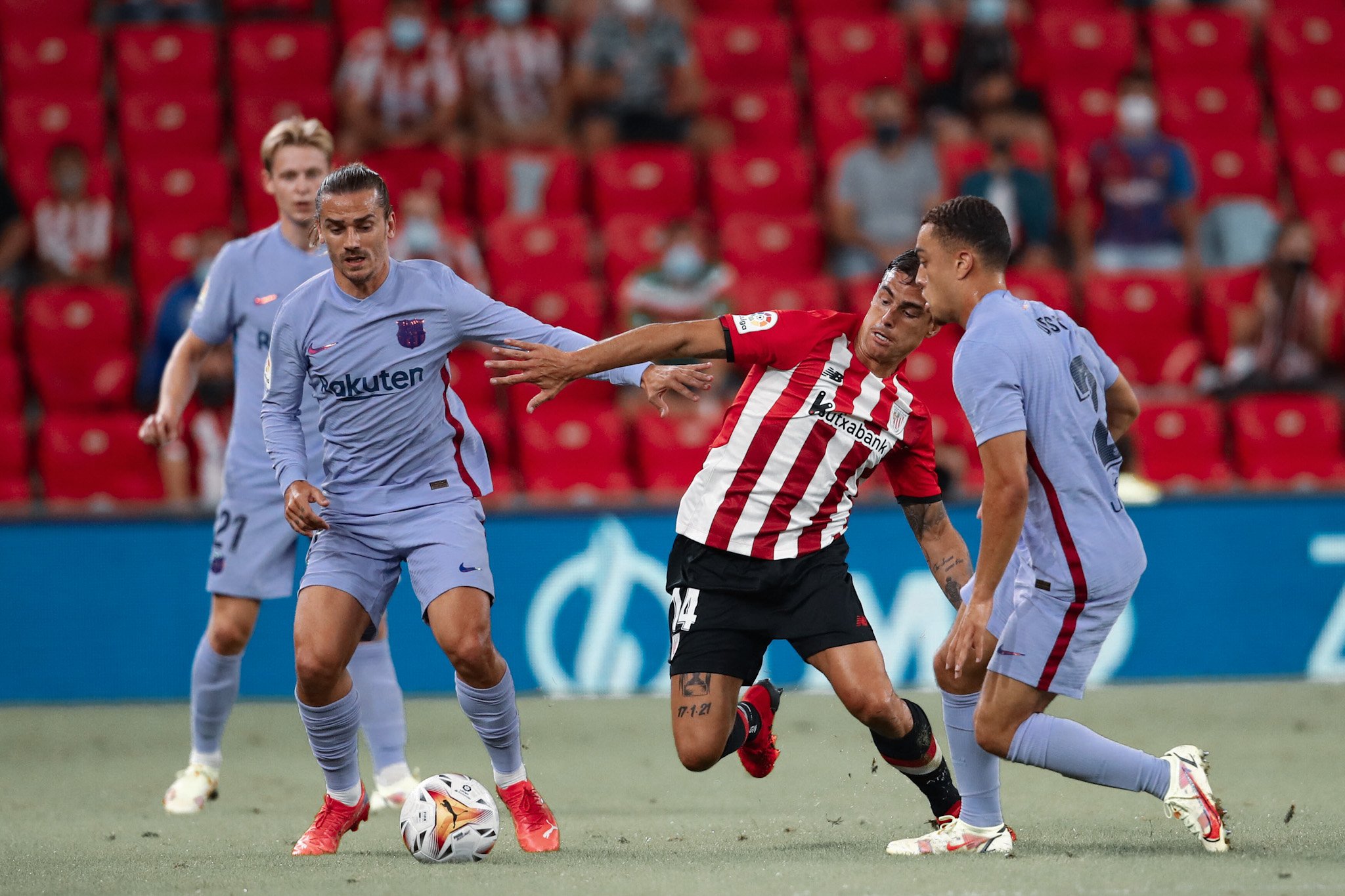 Barcelona travelled to Bilbao for their second game of the season on Saturday. The Catalans could not have asked for a more difficult first away game, for San Mames has historically been a challenging venue for them.

Ronald Koeman opted for the same lineup that he fielded against Real Sociedad, with young Pedri playing his last game before a two-week holiday. The game lived up to its expectations, for it was an end-to-end encounter with big chances for both sides.

From the get-go, Athletic Bilbao pressed high up the pitch with intent. In the opening five minutes, they already had three clear goalscoring chances. The visitors seemed to be back on track when Martin Braithwaite latched onto Memphis Depay’s shot a few minutes later. However, that was when Bilbao took back the control and hit the woodwork on minute 11.

Frenkie de Jong made a stunning flying block to deny Inaki Williams in the 17th minute as the hosts continued their rampage on Barcelona. Two minutes later, the referee brought out his yellow card after Pedri was brought down following a stunning incisive pass.

Athletic Bilbao continued to pile the pressure on Neto soon after, and Inaki Williams’ ability to time his runs tormented the Barcelona goalkeeper. That was the story of the first half, total domination by the hosts.

As the clock struck 27 minutes, Eric Garcia was booked for a reckless foul to stop the counter. At the half-hour mark, Gerard Pique signalled to the bench that he could not continue and Ronald Araujo came on to replace the second captain.

Nine minutes later, the stadium why quiet in awe when Williams tried a tremendous volley from outside the box. However, Neto was up for the task.

Ronald Araujo scored a wonderful bicycle kick in the opening minute of the extra time of the first half. The joy was short-lived as the referee immediately ruled it out for a foul by Martin Braithwaite in the buildup leading into the goal.

As the teams walked into the dressing room after half the game was played, Athletic Bilbao were undoubtedly the happier of the two sides. They not only dominated the half but held the Catalan defense with a tight noose around the neck.

The hosts piled the pressure on the Blaugrana goalkeeper every time he had the ball and swarmed the final third like hungry bloodhounds, looking to force a mistake out of their target. It was a clinic first half, just lacking a goal for Marcelino’s side.

The second half started with Barcelona players having their hearts in their mouths. Only an unbelievable off the line clearance by Ronald Araujo kept the score at 0-0. Clearly, the Basque side picked up exactly where they left off.

Marcelino’s side took the deserved lead in the 49th minute after Muniain’s header was clinically headed in by Inigo Martinez.

Sergino Dest dribbled his way past five defenders and got a shot away four minutes later, but the weak effort was far from enough to get on the scoresheet.

Ronald Koeman brought on Sergi Roberto and gave young Yusuf Demir his debut when the duo came on at the hour mark. Martin Braithwaite was the player sacrificed alongside Pedri, who could finally taste rest.

Barcelona tried to force their way back into the game over the next ten minutes. Memphis Depay’s sensational dribbling opened some locks but was not enough. De Jong came within an inch of scoring with an audacious lob over the keeper, but it got the crossbar.

Less than a minute later, Barcelona equalised in emphatic fashion. Roberto’s pass found Depay running on goal. However, it was no easy angle to shoot. The Dutchman lashed out a thunderous shot from the left, and it had too much power for Julen Agirrezabala to handle. At minute 75, the score was back on level terms.

After the leveller, the Copa del Dey champions slowly grew into the game in attack. The hosts began to tire, and spaces between the lines began to open. However, they continued to test Barcelona on the counter. Emerson Royal replaced Sergino Dest at the 81st minute.

Another goal seemed imminent for Barcelona five minutes later when Depay found himself open in front of goal, but his shot went painfully wide. Three minutes of added time could not change the scoreboard though both sides had their chances.

Eric Garcia was sent off in the last minute of the game when Nico Williams was directly in on goal. The Spaniard took a wild tackle to save the match, and it went Barcelona’s way as the game ended in a stalemate.

Taking on Athletic Bilbao at San Mames was never going to be easy. Most teams would take a draw at that venue gratefully with both hands, especially on a night when 11,000 fans filled the stadium for the first time in over a year.

Barcelona next up take on Getafe at home next week. The start to the season is indeed unforgiving for Koeman’s side with difficult games coming hard and fast. The Catalans will be without Eric Garcia or Pedri for the encounter against Michel’s side. Moreover, Pique’s injury puts his participation in doubt too. Needless to say, it will be an encounter that one cannot miss.