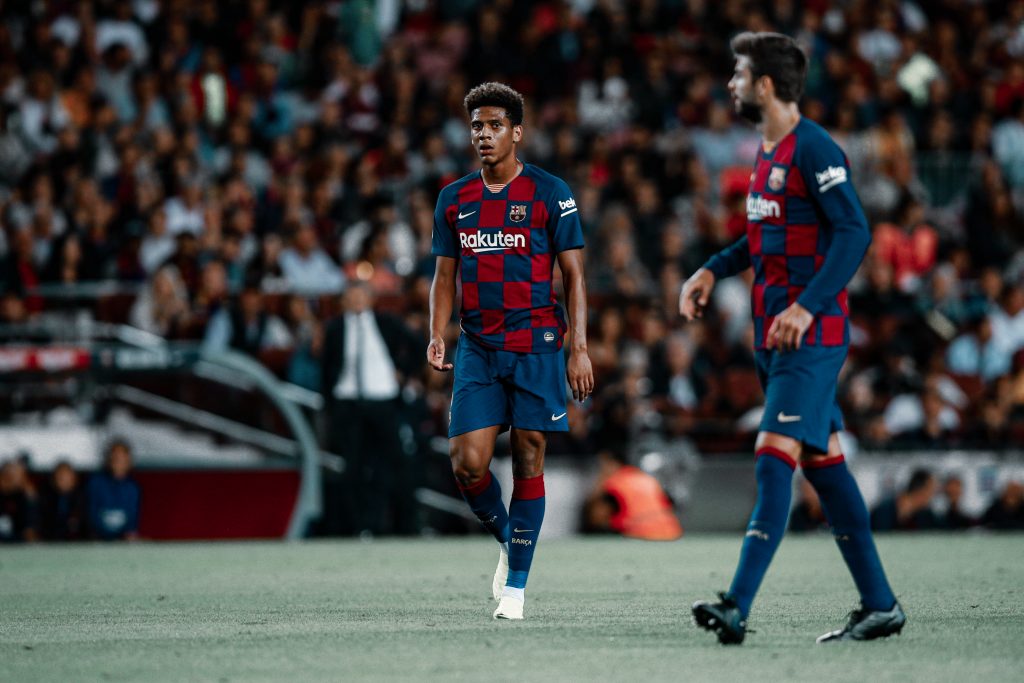 Gerard Piqué, Barcelona’s defensive leader, has recently been at the verge of a declining phase and will require suitable replacements to carry on his legacy.

Gerard Piqué, at 33 years of age, isn’t getting any younger. The Spaniard has enjoyed an incredibly illustrious career at Barça, but the veteran unfortunately doesn’t have much time ahead of him. Despite displaying some sturdy performances from time to time, a replacement at this point is much needed. So, who should Barça look to invest time and money in? Let’s evaluate the club’s options.

Manchester City’s Eric García has been attracting attention from all over Europe. Although Barça were once privileged to have Eric serving the club, they unsurprisingly let the gem slip through the cracks. However, fortunately, the possibility of a return could be on the cards as the 19-year-old’s former ties with the club make him a strong contender to continue succeeding with the Barcelona crest on his chest in the future.

Eric is positionally more mature than most experienced players and it all comes through his raw talent and brilliant understanding of the game. Whilst he may be a tad short for a centre-back, like various other La Masía prodigies, height doesn’t prevent him from tormenting oppositions and excelling on the field. Being the ball-playing defender he is, the Spaniard would fit Barça’s way of playing like a glove.

Former captain at La Masía, Eric García has been displaying a maturity way beyond his years | Photo by Andy Rowland via Imago

He carries the ball forward with confidence, releases it at precise moments and assesses his surroundings quickly and accurately. The youngster has the experience to defend in one-on-one situations and is a faultless distributor of the ball, rarely making errors in that facet of his gameplay.

Eric García has all the traits to flourish at the Camp Nou, where he once dreamed of succeeding. He’s admirably comfortable in possession, makes the right calls in pressure moments and most importantly, has experience playing for the club.

Jean-Clair Todibo has earned heaps of praise for his time at Schalke and seems one of the brightest centre-backs in the Bundesliga at the moment. While reports claim that the German side are unlikely to be able to afford the Frenchman, several other teams in Europe seem to be drooling all over the player. Nonetheless, the side that should be most interested in him is none other than Barcelona. Todibo has everything it takes to succeed at the club, with the only thing he lacks being fine-tuning and polish, which can easily be provided with abundant play time.

The former Toulouse man is tall, physical and an excellent ball-playing defender with dribbling being his main forte. He is remarkably solid in tight areas and known for his successful anticipation of strikers. Todibo’s most impressive performance in a blaugrana shirt came against Inter Milan, who were desperate to secure a win in order to proceed to the knockout stages of the Champions League. But, in spite of possessing the likes of Lautaro Martínez and Romelu Lukaku, Todibo stood in front of the Italians’ fiery attack like a rock. He denied Lautaro from having many looks at goal and was practically all over him.

Despite being accused of keeping the ball for unnecessarily long periods, the 20-year-old is every possession-oriented team’s prototype defender. There is no denying that filling in Piqué’s big boots would be a tough ask, but with a talented centre-back like Todibo already at Barça’s disposal, the club shouldn’t have much to worry about. The only concern regarding fans is whether he will be trusted by the board or simply used as a ploy to sign big names in the transfer window.

Uruguayan centre-back Ronald Araújo has been another name floating around with the 21-year-old being a serious contender to replace Piqué in the near future. Araújo’s development under Barça B coach García Pimienta has been worthy of endless admiration, and he has proven on countless occasions that his positional sense and defensive diligence is an underrated aspect of his gameplay. That said, to truly cement himself as Piqué’s ideal successor, Ronald must improve his ability to transfer the ball forward, an aspect which makes Gerard so distinct and well-defined.

Having arrived to the reserves in 2018, Ronald Araújo has been adapting to Barcelona’s style in the past two years | Photo by Imago

Araújo is a physically gifted defender who can supply Setién with strength and intelligence at the back. He is very competent aerially and a composed figure on the field. Despite getting sent off controversially in his debut game for the first team, the young prospect is exceedingly capable of commanding Barça’s uncoordinated backline. While Pimienta, who has been a major factor in the youngster’s growth, deserves massive credit, Ronald also exhibited that he is a quick learner and perfectly adept to one day make his breakthrough into the senior side.

Barcelona have many gleaming talents to choose from, but it is worth noticing that all the above-mentioned players are still developing and will require further attention. In order to see them recreate Piqué’s impact at the club, a lot of awareness will be required. Gerard’s role as a starter may not yet be in jeopardy, but the time to evaluate future options has arrived. What will Barça’s arbitrary board plan to do? Only time shall tell.