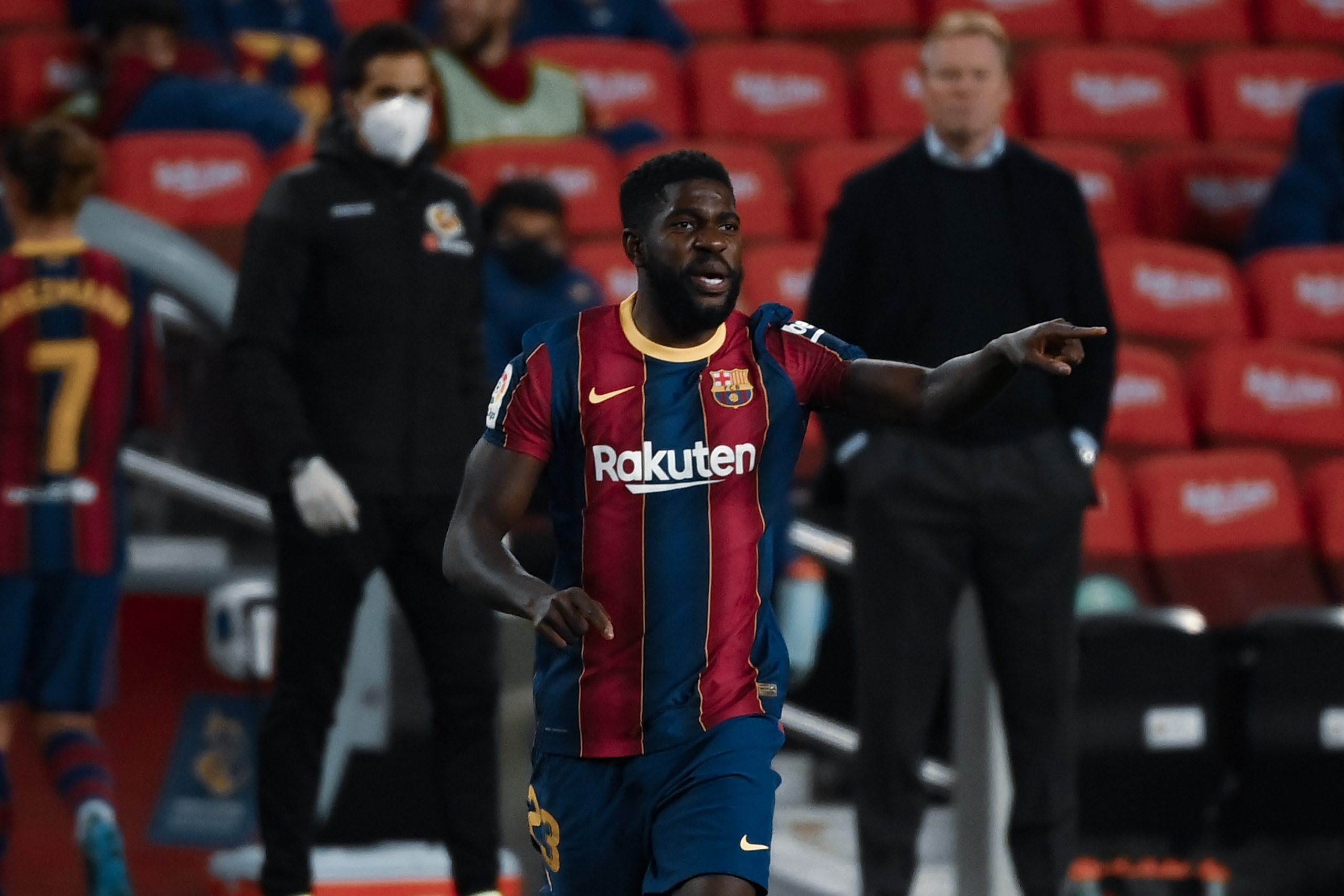 On 9 January 2021, Samuel Umtiti started and finished a game against Granada in Barcelona colours. It was also the game he was not supposed to start – or maybe even participate in at all – but a late warm-up injury to Ronald Araujo meant Ronald Koeman’s hand was practically forced.

With those 90 minutes under his belt, big Sam registered his first full La Liga display since 27 June 2020 when the Catalans drew against Celta de Vigo in a 2-2 stalemate. In 2019/20, despite suffering from injuries galore as well, the Frenchman was a somewhat steady presence in the team, nipping in and out of the squad but still offering something on occasion.

But even with that being said, this Umtiti is far from the one we were so used to seeing back in the day. In 2016/17, when he first arrived at the Camp Nou, the young centre-back was quickly recognised as a true rock in defence, soon even prompting the fans to call him the next Carles Puyol due to his charisma and solidity he offered.

3729 minutes across all competitions in that campaign and 3539 in 2017/18 indicated those claims were not thrown in vain. He was essential – a key cog in a team that had to fight on all fronts. However, it was in 2018/19 that things spiralled out of control and everything went downhill.

That season, Umtiti was out for 126 days due to two knee injuries, missing a total of 28 games or rather, 2520 potential minutes for the club. His very first knee injury was recorded the season prior to that, but that one forced him to spend only three games on the sidelines so the Catalans may not have thought much of it. And why would they?

After all, he’s never missed more than nine games at once due to a fitness issue until that point, both at Barcelona and Olympique Lyonnais. But despite that, the Frenchman was advised to opt for surgery to fix the issue. However, there was a big caveat in the whole situation – surgery would mean Umtiti would miss the 2018 World Cup in Russia and had he done that, he would have never become the champion of the world with France.

In that respect, his decision to go with alternative ways of recovery is somewhat warranted. But was it really worth it to throw away the rest of his career for it? Some will undoubtedly say yes, and Umtiti is among those people.

Fast forward a couple of seasons and the Frenchman is once again knee-deep in injuries. In 2020/21, he has already been absent for 157 days due to those very same issues. As a result, he was only selected four times by Koeman, registering a measly 145 minutes across all competitions for Barcelona so far.

But still, to some, there is something Umtiti can offer when he is fit and firing on all cylinders. The game against Granada, his latest full 90 minutes clash, proved as much. Yes, the whole team was dominant and riding on the wings of their stars, but the Frenchman was also quite impressive himself.

According to SofaScore, the 27-year-old registered two interceptions, one tackle, won both of his ground duels and one out of two aerial duels. And with his 97% pass accuracy, Umtiti was calm in possession and even supported the attack with 5/5 long balls.

But at the end of the day, is this enough to warrant him another chance in the team? It might sound harsh considering he is still a player in his prime years and a defender at that, meaning he could potentially have a somewhat longer career than other outfield players, but his level is not where it should be anymore.

Even if it was, Umtiti has not exactly been the reliable rock we loved watching week in, week out some years back. And for a club of Barcelona’s stature that matters, a lot. How are the Catalans supposed to fight on all fronts if they cannot trust Umtiti to stay fit?

Unfortunately, despite his valiant efforts at the beginning of his Camp Nou adventure, it does feel like the time is up for the French Puyol. As much as it hurts to say that because we all know the potential was there, there is no escaping the truth.

However, the worst thing is that other teams know it as well, which is exactly why Barcelona is now struggling to sell the defender. How can you find a suitor for a player who cannot stay healthy but is on colossal wages nonetheless?

That, of course, is an entirely different problem, not exactly related to the sporting project in Catalonia and a topic for another time.

The display against Granada was impressive, not exactly reminiscent of older, better days, but still better than what we have come to expect. However, Umtiti needs to do far more, far better and on a far more consistent basis to turn his fortune around.

Can he still do it? That remains to be seen.