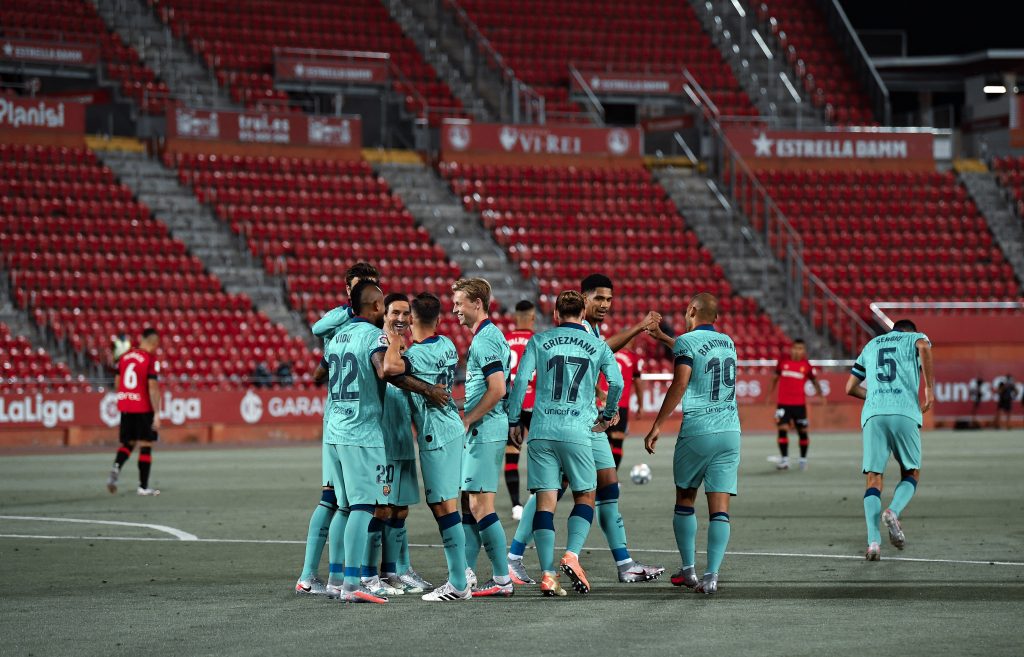 The 4–0 win from Barcelona away at Mallorca was a dominant display, and the fact that it was in a stadium with no fans helped them a lot in the demolition.

Barcelona are a different beast in domestic competitions, especially recently. Their dominance in La Liga in the past decade has been really impressive, and they have won eight out of eleven league titles. Real Madrid and Atlético de Madrid had to pull off historical campaigns to beat the Catalans since Pep Guardiola was appointed in 2008. For example, Real Madrid had to break the points record in Spain, and that takes some memorable performances in the league to reach more than 100 points.

Recently, Barcelona have had some woes away from home, though. They have failed to dominate their matches on the road and have lost some big games at Spain’s most beautiful venues. At Mestalla, Santiago Bernabéu or San Mamés, the culés have often looked toothless and have been stung by Maxi Gómez, Vinícius Júnior, Aritz Aduriz and Iñaki Williams. These games were lost because of the shape the Catalans took against those dangerous opponents. It was like Barcelona reverted to their victim past.

Additionally, the electric atmospheres the Ches‘, the Merengues‘ and the Lions’ fans often make the players tremble when going head-to-head against this sort of teams. Barcelona’s away record in this La Liga edition has been more than mediocre. Before the Mallorca fixture, the blaugranas won 5 out of 13 encounters away from home.

Yesterday’s demolition job in the Balearic islands was a game where Barça looked like they didn’t care about home or away fixtures. Nothing had changed, it was the same players and the same manager as before lockdown but the Catalans looked relieved and free. It might have something to do with the 98-day break, but one big detail has changed in La Liga. Empty stadiums mean nullified atmosphere in every great venue in Spain.

Last night’s serious clash from the league leaders came from the freedom the empty stadium had created. No ultras were screaming at the top of their lungs, no projectiles from those same ultras and no encouraging chants for the Mallorca players who were up against the holders. In other words, it was mission impossible for the red outfit to get something out of this encounter. Players who usually feel the pressure like Jordi Alba did an outstanding job and the former Valencia left-back scored a goal and assisted one, equalling his tally for the season.

The culés had a great game, from start to finish. They did not feel any pressure, and also were able to handle the momentum in a more adequate way than when the home fans begin a frightening chant or try to encourage their troops. Playing in an empty stadium makes it look like a neutral venue, just like a final.

In recent years, Barcelona hasn’t lost many finals. In the Champions League, they won two finals out of two in the 2010s, and in the Copa del Rey they lost three finals out of eight in the last decade. Barça do not lose in neutral venues and feel as though they can play their game without being judged. They won’t receive whistles from the home fans who hate their guts and are angry at their side’s sub-par display.

Playing at away venues is always hard, especially in Spain. The love for football is palpable every game and the teams play way more attacking football when they’re in front of their supporters. Now, with no fans, what counts is the quality on the pitch, which is why Barcelona played in such a free way at Mallorca. To keep their run of La Liga titles going, it’s imperative to get results at home and especially away from home. With no fans, it’s easier to get results, and many people will fancy Barcelona to retain their La Liga trophy for three years in a row.